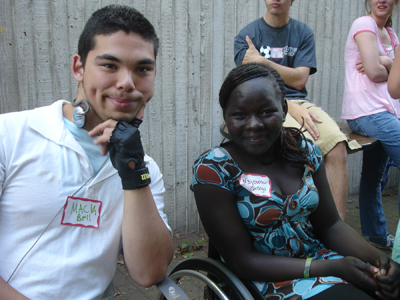 Since DO-IT Scholars, Ambassadors, Pals, Mentors, Parents, and Staff are all a part of the DO-IT family, it's not surprising that we have a good old fashioned family reunion at least twice a year. The 2008 spring DO-IT family reunion, also known as the DO-IT pizza party, was held in Ellensburg, Spokane, and Seattle.

The pizza party is the first opportunity for everyone to meet some of the new Phase I Scholars. This year, new Scholars Emily, Nejowa, Mack, Erik, Yomara, Sam, Brianna, Russell, Aaron, Chris, and Marco attended. Noah, a DO-IT Ambassador currently attending the UW, gave new Scholars a tour of the campus to help them prepare for their return two months later for Summer Study.

In Seattle, the weather was so nice that some of us ate our pizza outside on the patio. Others opted to stay inside for games and a live video feed to the Spokane and Ellensburg parties.

The Scholars are not the only ones who have fun at DO-IT pizza parties. More than thirty parents of Scholars and Ambassadors attended the Seattle party. Their network of support is sustained throughout the year on an online discussion list.