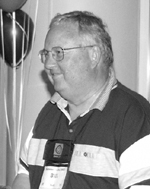 Camp Courage provides a camp experience for folks with disabilities and is one of DO-IT's summer projects where I volunteer my time. A couple of summers ago, DO-IT was ending a summer session at Camp Courage in Minnesota. One of the campers was in tears. I asked her what was wrong, and she haltingly replied that camp was ending and she had to go home. I said, "Yes?" not understanding the problem. She sobbed, "You don't understand, at home no one appreciates the problems I go through. Here, everyone understands and it doesn't matter." Here was a young girl that had a memorable camp experience and did not want it to end.

How does one get an opportunity to experience that emotion? Well, I went to Sheryl and Dave Burgstahler's for dinner several years ago and they told me about the DO-IT program. I offered to help and, since Sheryl never turns a resource down, I think I was on the Mentor list before the night was over. I'm not sure what all the requirements are to become a DO-IT Mentor, but perhaps an interest in helping young people grow and develop and a career in Software Engineering qualify. I worked for Boeing when it was called Douglas, and McDonnell Douglas, and then again when it was called Boeing. I worked on the Saturn/Apollo program at the Cape when we were launching men to the moon. I worked for Boeing making an automated transportation system to move students around the University of West Virginia campus in Morgantown. Software engineers get to do lots of weird stuff. But the weirdest of all is being Dorm Dad for the DO-IT Summer Study program. Like the requirements for becoming a DO-IT Mentor, I don't think the requirements for Dorm Dad are things you can fully put down on paper. Being the DO-IT Dorm Dad for the last few years has given me the opportunity to get to know some neat Scholars who are about to meet new challenges of college and life as young adults.

A few years ago at Summer Study one of the Scholars was in an electric wheelchair, but she played a powerful ping-pong game with one hand on the paddle and the other on the wheelchair's joystick. She was a tiny young lady and listened carefully when it was announced that if the summer schedule was too tiring, the Scholars could inquire about taking a nap. So this young lady asked if she could skip class in favor of a nap. When asked if she was tired, she said, "No, but if I take a nap now I can stay up later and play Ping-Pong!" Nap denied.

‹ Another Great Summer for DO-IT Interns! up DO-IT Staff Profile ›
Back to Top