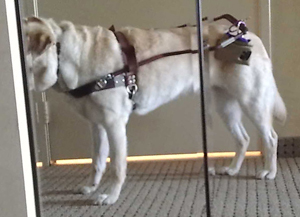 A self-portrait of Pecan taken with the camera attached to her harness.

This year, CSUN featured 118 exhibitors and 304 breakout sessions related to assistive technology (AT) and accessibility. Sheryl, Terrill, Tami, and Wendy are seasoned CSUN attendees. Between the four of them, they have attended the conference at least forty times! The conference community includes a variety of people from all over the world, with and without disabilities, who have an interest in AT. Participants include representatives from education, industry, government, business, and disability organizations. Like us, many of CSUN's participants attend the conference regularly. As Sheryl observed, "CSUN is like going to a class reunion, except we get to do it every year and there are always new kids joining the group."

Fortunately, people who were unable to attend in 2010 were able to stay abreast of conference activities, thanks to a social networking presence. For example, Twitter, which allows users to post short messages ("tweets") of 140 characters or less, was extremely popular at CSUN. Conference participants accessed Twitter with a variety of applications on computers and cell phones and used it to coordinate impromptu meetings, arrange transportation and report on traffic delays, share key points from breakout sessions, and contribute ideas to conference-related discussions.

Participants also used FlickR, blogs, and other social media to share their observations from the exhibit hall. Wendy was one such participant, finding excitement in smaller, less common products that she felt were especially innovative, such as a 4x magnifier that looks like a beautiful ladybug pendant (www.independentliving.com/prodinfo.asp?number=581239); the SENSEsational Alphabet, a book that teaches kids the alphabet using sight, sound, smell, and touch (www.sensesationalalphabet.com/); and Vizzle, a social learning environment in which teachers, parents, therapists, and others who work with students who have autism can easily create custom interactive visual lessons and share them with other subscribers (www.monarchteachtech.com/).

Many Twitter discussions that started at CSUN have continued after the conference. One month following the conference, there were 3,243 tweets related to the conference. Bloggers were active at CSUN as well, and many posted CSUN recaps that described conference highlights from their unique perspectives. A Google search for "CSUN Conference 2010 blog" yields about 23,500 results, and some of the more interesting blog posts continue to stimulate discussions.

Another example of social networking at the conference was Seeing Y's photostream, an experiment led by Yahoo! in which a guide dog named Pecan automatically snapped photos every 30 seconds (she had a camera mounted to her harness) and sent them wirelessly to FlickR (www.flickr.com/photos/seeingy/). The photostream provides an interesting glimpse at what CSUN looks like to one of the many guide dogs who attend the conference.

As usual, CSUN 2010 provided a great opportunity to learn, interact, and sample the latest assistive technologies. It also provided an opportunity, for people who were physically present at the conference and those who were not, to experience the benefits of social networking.