DO-IT and the Pacific Rim 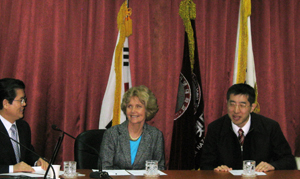 Drs. Burgstahler and Iwabuchi (at middle and right) meet with leaders at Korea Nazarene University to discuss the possibility of a Summer Study program on that campus.

In March 2010, I spent a week in South Korea visiting with various groups who are interested in implementing DO-IT programs, much like we have done at the University of Tokyo (UT) in Japan (www.doit-japan.org). The potential collaborators were joined by Professor Mamoru Iwabuchi of UT; Mamoru was a visiting scholar at the DO-IT Center for a year in 2004-2005 and was among those who led the effort to replicate successful DO-IT practices in Japan. Takeo Kondo is our new visiting scholar from UT (see his staff profile in the following article). Some of you may recall that two of our DO-IT Ambassadors, Chris and Stuart, traveled to Japan to help with the first DO-IT Summer Study there in 2007 (www.uw.edu/doit/Newsletters/Jan08/17.html).

Professor Sang-Mook Lee of Seoul National University, who hosted our trip to Korea, visited the UW last December to begin our collaboration. Check out the NOVA video featuring Dr. Lee at www.pbs.org/wgbh/nova/sciencenow/0408/03.html . We are honored that he wishes to collaborate with us! We met with leaders in special education, postsecondary education of students with disabilities, accessible technology, as well as disability advocates. Ben Sommers, a UW graduate and former DO-IT employee, joined us in several of our meetings; currently he is teaching in South Korea. The following week, nine delegates from Korea visited the DO-IT Center in Seattle. They were led by Chan Kwon, Microsoft's Community Affairs Lead of Korea. 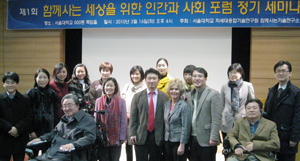 Korean time is sixteen hours ahead of Seattle, so in the morning I could communicate with DO-IT Center staff the previous afternoon before they left work. They are used to hearing from me when I travel, but not as a voice from the future. I left Korea at 8:00 p.m. on a Saturday night and arrived in Seattle at 8:15 p.m. on the same Saturday night. That was the LONGEST fifteen minutes of my life! Stay tuned for more exciting news about our collaborations with Japan and South Korea.

‹ Goodbye, Patrick up DO-IT Profile: Visiting Scholar ›
Back to Top