What a trip! It is hard to know where to start in sharing with you my trip to Japan earlier in October, 2012. I was invited by our DO-IT Japan partners (yes, there is a DO-IT Japan program patterned after ours, see www.doit-japan.org). Dr. Takeo Kondo, a Tokyo University faculty member who, along with his family, spent a year (2010-2011) as a Visiting Scholar in the DO-IT program in Seattle, was my primary guide and even coordinated some sight seeing. 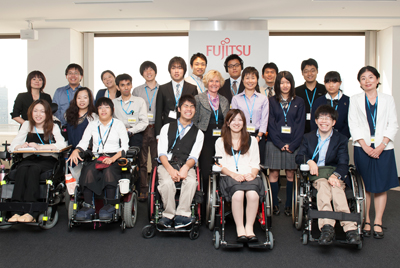 Director Sheryl Burgstahler (center) and Director of DO-IT Japan Takeo Kondo (to left and back of Sheryl) engage with DO-IT participants in Japan after Sheryl's talk at Fujitsu.

I gave a talk about access technology, universal design, and transition issues at the headquarters of DO-IT Japan's primary sponsor, Fujitsu, in Tokyo. Then I met with leaders of Fujitsu, which is the third largest IT company in the world, to learn more about their work and to share ideas regarding how more individuals with disabilities can be involved in the design and development of their products. I was joined by the DO-IT leader and Tokyo University professor Dr. Kenryu Nakamura. After that meeting I spent time engaging with DO-IT Japan Scholars. Takuya, a '93 DO-IT Scholar from the US that returned to Japan after attending the UW, is part of the group in a mentoring role. It was fun to see him.

After engaging with Fujitsu I had a chance to visit KidZania, a place for children to explore different careers in a Disneyland-type atmosphere. All of the buildings and places of "employment" are 2/3 the size so the children feel right at home. DO-IT Japan hosted an area for students with disabilities to test new software and is working with KidZania to make some of their interactive exhibits more accessible to students with disabilities. Dr. Mamoru Iwabuchi, a leader in DO-IT Japan and Visiting Scholar to DO-IT in Seattle area 2004-2005, conducted the technology sessions.

From Tokyo we took a train north to the large city of Sendai. There I spoke about transition issues and evidence-based practices in support of students with learning disabilities at a conference focused on learning disabilities. Over the last five years this area of interest has grown tremendously in Japan.

The next day I was honored to be escorted to the 2011 Tsunami area and witness the destruction there. Most of the rubble has been cleared away, some still visible in large piles, and there are miles of open space where there were once hotels, small towns, businesses, houses, and schools.

The last evening in Tokyo I was able to have dinner with Mamoru and Takeo and their families. What a fun treat at the end of the visit!

In summary, I spent an amazing week in Japan and came back energized by the enthusiasm of our collaborators in that country.

‹ Ambassador Profile: Sean Marihugh up Scholarship Scams and Tips ›
Back to Top