Disability in the Media: Stella Young 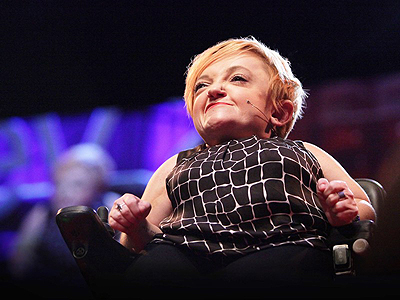 Stella Young was a comedian, writer, and disability activist who believed in reshaping the way society views people with disabilities. Photo provided by TEDxSydney.

I want to make a space in my media series to recognize an influential disability activist who recently passed away in December 2014. Stella Young was a comedian, writer, and activist who believed in reshaping the way society views people with disabilities. She partnered with organizations such as the Victorian Disability Advisory Council, Youth Disability Advocacy Service, and Women With Disabilities Victoria. She was involved with many disability-related projects including Ramp Up, an online space about disability issues and No Limits, a show about disability culture in Australia.

I had not heard of Stella Young until her TED Talk started circulating on social media in June of 2014. Her talk was entitled “I’m not your inspiration, thank you very much.” My first impression of Stella was that she was young, incredibly funny, fashionable, and appeared to be completely comfortable in her own body, which happened to be in a wheelchair. I couldn’t help but laugh when she made a joke about Buffy the Vampire Slayer. I related to her, and, although I cannot claim to be all of those things, it was a reflection of what I wanted to be. Growing up I had very few role models to look up to who looked like me, and none that I actually connected with on a deeper level. Within minutes of watching her talk she became that person.

Her TED Talk was focused on how society objectifies people with disabilities as objects of inspiration, which she called “inspiration porn.” These images often portray an individual with a disability with text that reads: The only disability in life is a bad attitude. Stella stated that the purposes of these images are to “objectify disabled people for the benefit of nondisabled people. They are there so that you can look at them and think that things aren’t so bad for you, to put your worries into perspective.” She talked about how society has such low expectations of disabled people that everyday activities such as getting on the bus is praised. These low expectations are often verbalized by non-disabled with the best intentions engaging people with disabilities out in public. People want to be inspired and recognize the hardships others have, but in doing so it perpetuates the “otherness” label that many minorities are given.

In response to the question of people with disabilities being inspirational, she explained: “I learn from other disabled people all the time. I’m learning not that I am luckier than them, though. I am learning that it’s a genius idea to use a pair of barbecue tongs to pick up things that you dropped. I’m learning that nifty trick where you can charge your mobile phone battery from your chair battery. Genius. We are learning from each others’ strength and endurance, not against our bodies and our diagnoses, but against a world that exceptionalizes and objectifies us.” People with disabilities are overcoming more than just their diagnoses but the stigma of society around them. They show resilience and innovation in navigating a world of inaccessibility, stigma, and discrimination.

Watch Stella’s TED Talk, which has been viewed more than one and a half million times, at www.ted.com/talks/stella_young_i_m_not_your_inspiration_thank_you_very_much. The video includes captions and a full transcript.

To learn about some of the projects Stella supported, visit the Disability Media Australia website at https://pwd.org.au/resources/library/media/