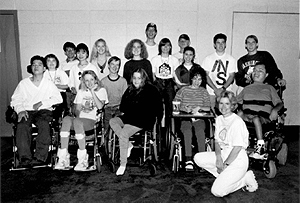 The 1994 DO-IT Summer Study Programs were a great success. Eighteen Phase I Scholars (the new kids) attended a two-week program from August 7 to 19. Some Phase II Scholars came early to help the first week. They were joined by the remaining Phase II Scholars for their own program during the second week.

In preparation for this year's program, Phase I Scholars got a chance to meet one another on the Internet through e-mail--a rare opportunity for most students about to attend a summer camp. Discussions covered everything from college planning to the O.J. Simpson trial to an argument over ADA provisions.

Once they arrived for the summer program, Phase I Scholars were finally able to meet their cyberspace friends in person and learn about science and engineering, prepare for the transition from high school to college, and generally have a lot of fun.

As the week continued, the Phase I Scholars learned about how one's body deals with spaceflight, giving commands in UNIX, how to perform heart bypass surgery, and some even viewed Jupiter and the dark spots created from when the Shoemaker-Levy 9 comet fragments hit.

On Saturday, Scholars got a well deserved break from routine by going to the Pacific Science Center. On Sunday all Scholars were joined by the remaining second year students during an evening barbecue at which Spinal Chord, a Vancouver B.C. band of musicians with disabilities, entertained.

For the final week Phase II Scholars formed study groups where they focused on special topics of study, ranging from DNA composition to information systems to computer programming.

On Friday, the DO-IT Scholars--all thirty of them--went home. But by Saturday, many had logged onto the Internet to continue communicating with one another, and to pore through the many science resources available to them. The DO-IT program just keeps going and going and going and going.

‹ DO-IT News September 1994 up Technology Tips ›
Back to Top