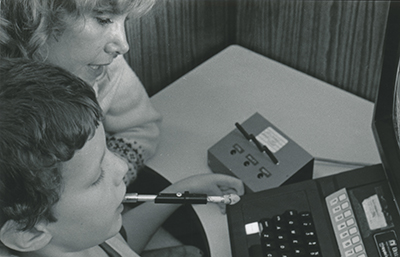 I am sad to report the passing of Rodney Lewis. I met him when he was six years old, and he became my inspiration for the design of the DO-IT Scholars program. In 1992 I submitted a grant proposal to the National Science Foundation (NSF) to fund a program for teens with disabilities; however, before approving the grant, the NSF required that I provide a proof of concept regarding the ability of a teen with a disability to get connected and engage with mentors and staff online at a time when the internet was only readily available to universities, research organizations, and large companies. I chose Rodney to be the test case, and he became the first Scholar and the only one who was selected before we instituted a formal application process. The test was successful and the rest is history; we have continued to fund the DO-IT Scholars program ever since, first with NSF funds and later with Washington State and other corporate and individual contributions. Rodney also introduced me to the field of assistive technology (AT), as described in the following excerpt from my book Creating Inclusive Learning Opportunities in Higher Education: A Universal Design Toolkit (2020, Harvard Education Press, p. 75–77):

In 1982, I learned about a local six-year-old, Rodney, unable to use his hands because of a condition called arthrogryposis, who was learning to type on an electric typewriter using a stick in his mouth, called a mouth wand. I met his special education teacher who wondered if Rodney could operate a computer. I didn’t know for sure but invited her, Rodney, and his family to come to our Microcomputer Resource Center at Saint Martin’s College, where I taught mathematics, computer science, and education courses. Before I met him, his teacher shared with me a copy of the first letter Rodney wrote on a typewriter. In part, he said:

I want to tell you my name. My name is Rodney and I Am 6 years old . . . I am handicapped bebecause I can’t use my legs or my hands because I have little muscles and dbones.

I go to Skyline Exceptional School . . . I get to learn to type with my special mouth wand. Someday I will get to use a computer because I am smart even tho handicapped.

This is my first letter L typed. I Worked hard typing. TThank you for being nice .

Who wouldn’t want to get to know this kid? In our first meeting, we quickly realized that Rodney could perform all of the functions available through an Apple II computer keyboard using his mouth wand except for those requiring him to press two keys simultaneously. The inability of the Shift, Control, and Repeat keys to be locked presented a barrier to him. So, I embarked on a journey to find a way to fix this computer limitation. First, contacting Apple Inc. and then passing through a chain of technology leaders with no luck, I finally found Gregg Vanderheiden and his colleagues at the Trace Center at the University of Wisconsin. One phone conversation led to the delivery in postal mail of a hand-drawn diagram showing how to build a switch box to lock the Shift, Control, and Repeat keys. I hired an engineering student at the college to build it. Included is an image of me with Rodney as he controls a computer using his mouth wand, computer keyboard, and “magic” switch box.

This was my first experience in a field of research and practice—assistive technology—that was opening a world of digital opportunities for individuals with disabilities. I met with Rodney once a week for many years to teach him word processing, other applications, and programming. By the time he was eight years old, Rodney was sharing programming tips with my college students.

Word about Rodney spread. St. Martin’s became a magnet for people exploring computer access issues for individuals with disabilities. I recruited as many experts as I could find to teach Saturday workshops on computer use by people with physical disabilities and, later, sensory differences and, later still, learning disabilities.

Because of these experiences, when I was hired to lead the new Microcomputer Support Group (MSG) at the University of Washington in 1984, I immediately added making IT accessible to faculty, students, and staff with disabilities to the MSG mission statement. In those days, Rodney and I could not have imagined that by today there would be thousands of commercially available AT products, let alone the many features that benefit individuals with disabilities that are integrated into mainstream IT. The locking functions we achieved with Rodney’s switch box are now routinely built into operating systems as “sticky keys.”