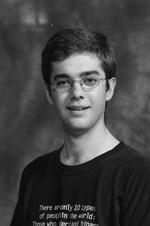 I have had an interest in technology since a young age. In 2003, I was chosen as a DO-IT Scholar and the access to technology this provided was indeed helpful. During my second year as a Scholar, for my Phase II Project, I did a survey of accessibility features in various computer operating systems.

I also designed my own independent study of computer programming during high school to make sure I was getting the most out of my education. When I graduated from Chief Sealth High School in 2005, I had already completed a summer internship at Microsoft and was preparing to do another before heading to Goshen College in Indiana.

Last summer, I was offered the opportunity to be the only intern at Granite Edge Networks in Bellevue, Washington, through the DO-IT AccessSTEM project. During this internship, I added build reporting and other functionality in Perl (a programming language); proposed, researched, and re-implemented a client side installer after determining that the previous installer package was no longer able to do what was needed; and automated most of the build process for the client side application where no automation had existed before. This was all great experience for me in computer programming.

During the school year at Goshen College, I am a lab assistant in the Computer Science Department for a Programming Techniques class. I also participate in the Goshen Men's Chorus and joined them on a West coast tour this year.

Recently, I was accepted as an intern with NASA at Kennedy Space Center. I will be in Florida this summer working on a document management system for the Constellation Project, which is developing the next manned space vehicle that will go to the International Space Station and, later, probably to the moon and Mars. I'm really looking forward to working in their safety division.

I want to thank everyone from DO-IT for their help and support of my long-term success.