Adaptive Sports: An Opportunity Behind the Scenes

Printer-friendly version
By Samuel and Aidan, Phase I Scholars 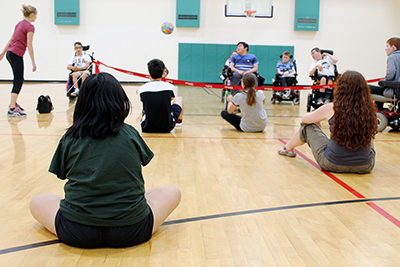 Seated volleyball is another example of an accessible sport.

A basketball player goes for a layup. A soccer player spins past an opponent. Two rugby players collide, fighting for the ball. When you read these statements, do you imagine a game with players standing and running? What if I told you that I was describing adaptive sports? Would that influence how you saw the situation? Nearly one in five people in the US have a disability, yet disability sports are rarely televised and lack the prominence of their abled counterparts. If adaptive sports were featured more often, there would be a growth in acceptance for people with disabilities.

Generally defined, adaptive sports are sports that are modified to allow people with physical and sometimes mental disabilities to participate. Almost every sport, and many other athletic recreational activities, has an adaptive counterpart.

One common example is wheelchair soccer, also referred to as power soccer. It’s known as the first competitive power chair sport, and has an Official US Federation, competitive leagues, and even a World Cup. In January 2005, representatives from seven countries got together to form the International Powerchair Football Association (IPFA). Nowadays, over 250 teams compete under the IPFA banner. Power soccer is also officially listed in the Olympics. Wheelchair soccer follows most of the same rules as non-adaptive soccer. However, there are a few key differences. Power soccer is played on a basketball court with teams consisting of four players and the ball must be moved by a player’s chair, not their hands or feet. Team USA currently holds the Power Soccer World Championship.

We want to make a call for action to more publicly support and acknowledge adaptive sports. Writers can feature these sports, activists and politicians can create change, and television networks can showcase games. Adaptive sports are not so different from the “norm,” so why shouldn’t they be just as featured? It will take a collective effort to surmount this issue, but perhaps, with a concerted push, we can give adaptive sports the prominence that they deserve.

If you have a disability and are interested in participating in an adaptive sport, look for local teams. In the Seattle area, check out Seattle Adaptive Sports.

‹ Summer Study: What Do Phase I Scholars Do? up Planetarium: Our Digital Trip Through the Universe ›
Back to Top