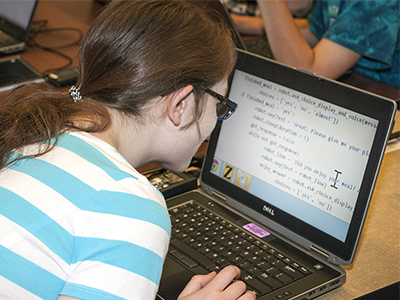 I’m a legally blind (low vision) second-year student at the University of Washington majoring in computer science and minoring in physics and math. I am only able to access the same course materials as my peers due to several classroom accommodations.

I use a smartpen, which allows me to audio record my professors’ voices as I take notes. I write in a special notebook that syncs to the audio recording when I write. This way, if I have any questions about the material, I can go back and tap on sections of my notes and hear the lecture again. I use this in conjunction with a note-taker, who can write what the professor writes on the board, including graphs, charts, and diagrams. I can then relisten to my smartpen notes while viewing those visuals up close.

I also use large print and electronic copies of handouts and worksheets. I carry hand-held magnifying glasses with me in case a professor forgets to enlarge something, and I always sit near the front of the room so I can try to make out as much as possible on the board. I also often use low-tech options like using raised stickers to tell different buttons apart in labs or at home.

For assistive technology, I use a screen magnification software called ZoomText to magnify everything on my laptop, which is hooked up to a larger monitor. I also use a screen reader to read longer documents to me, since my eyes can get tired. I sometimes have to use ABBY FineReader, which converts image text into Word documents for me, so the screen reader can work properly. If I have physical copies of textbooks, I use a Pear Camera, which takes photos of pages in a book to digitize them. OpenBook then converts them into accessible text. If I’m taking a test, I use a cool piece of technology called a CCTV, which is a high-powered electronic magnifier that enlarges my test, and I can still write on it.

One of my biggest innovations has been my iPad, where I can carry around thousands of accessible textbooks, as well as my talking calculator app and a variety of other tools. If I’m out at a restaurant and can’t read the menu (or a variety of other scenarios), I often take a photo of it and enlarge it.

I was recently named Freshman Medalist of the University of Washington, meaning I had the highest GPA considering my tough course load and numerous extracurricular activities. I am also in the Husky Marching Band, and am an undergraduate teaching assistant. Many people resent the term “disability” because it implies that some people are less able than others. I personally do not feel that I am “disabled” from doing anything, despite my vision. With innovation and certain accommodations, I have the potential to do anything I set my mind to. Whether someone takes the ramp or the stairs, they are still able to get through the door. Even though some people use different tools, it does not mean that the outcome of their work or their project will be lesser than that of others.