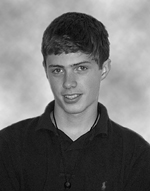 The following excerpts are from email messages sent by Carson, a University of Washington student with a learning disability who worked at the National Aeronautics and Space Administration in summer (2005). This internship opportunity was coordinated through DO-IT's AccessSTEM project.

June 7: "Some people have asked me about where I applied to get the NASA internship. It is through a program called ENTRYPOINT at the American Association for the Advancement of Science (AAAS). I would strongly encourage you to apply if you are a college student and have an interest in a career in science or engineering."

June 19: "It has been one week since I flew into New Orleans to start an 8-week internship at the Stennis Space Center in Mississippi. I'm living in New Orleans with three other guys, one of whom is also an intern. I'm working with Boeing engineers and technicians who have been contracted by NASA to test rocket engines. This first week has been a lot of fun. The plume of vapor is huge and produces heavy rain! Mainly this past week I have been meeting people and getting a feel for how everything fits together. One specific thing I did this week was to enter ultrasonic bolt measurements into a database. They keep track of every minute detail to the nth degree because even a small error can spell disaster. Last night we went to Bourbon Street in downtown New Orleans-it was quite a site to see."

June 23: "There are three different 'test stands', which are very large concrete structures that cradle the engines during testing. There are several teams who facilitate the testing process. The one I am assigned to is called 'ground support and maintenance'. Their activities include making parts for maintenance purposes. We also do load testing to make sure the equipment can properly hold the engine. The test results came in yesterday and it was found there were several blowouts in the coolant tubing which lines the nozzle. Today I went over to check out the damage."

July 3: "This week I worked on two different projects, one in the office and the other on the engine test stand. The office job involved tracking down and making a list of lapping tools. They are used to smooth down joints on the engine tubing. The engine we work on is called the Space Shuttle Main Engine (SSME). I have been trying to understand how it works. Looking at it's blue print is kind of mind boggling. The other job I'm working on is on the test complex. What I am doing there is helping a mechanic take down a bunch of old tubing and components used on a project that is no longer in service. This internship is a unique chance for me to mix with really different people."

July 27: "It was determined that a piece of foam that came off the shuttle's main fuel tank about two minutes into flight was very serious. Had it come off earlier, they said, it could have caused fatal damage to the spacecraft. This is a major setback to NASA because they have been working very hard on this issue. Hopefully this problem can be fixed soon. The current mission is not in jeopardy as far as anyone knows, but we did have a close call."

Why Participate in Work-Based Learning?

Work-based learning experiences can help you:

For more information about the value of work-based learning, read the DO-IT publication It's Your Career: Work-Based Learning Opportunities for College Students with Disabilities at: www.washington.edu/doit/its-your-career-work-based-learning-opportunities-college-students-disabilities.