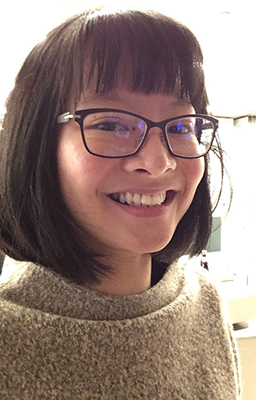 I attended Gallaudet University, a school for the Deaf and hard of hearing located in Washington, DC. After graduating from Gallaudet, I moved to Seattle for back-to-back internships at Microsoft as a software engineer and began attending the UW computer science program for a post-baccalaureate degree.

One of my projects is PaintSound, which is a software application on the Microsoft HoloLens platform that can detect sources of sounds and then visualize them. This project is an extension of a previous app that I worked on at Microsoft named EyeHear. EyeHear converts spoken English into captions on HoloLens in order to enhance Deaf and hard of hearing users’ experience in group settings.

PaintSound, in contrast, doesn’t perform language translation. Rather, it finds the source of sounds, shows it to the user, and visualizes the sounds in a creative way. In our most recent prototype, PaintSound shows darker colors such as blue or purple for low pitches, and brighter colors such as red and orange for higher pitches.

I created this application with a group of interns in the One Week Hackathon at Microsoft. Some of my friends are born deaf, and assistive technologies such as cochlear implants or hearing aids cannot provide a full sense of the array of sounds in their environment. Having lost my own hearing at age 13, I have missed the rich nuance of sounds. I wanted to spread the idea that what’s often missed with deafness is not only auditory information but also the enjoyable melody of life. It’s important that we as deaf people gain equal access to the world. I chose to work on this project because I am very passionate about accessibility—my dream is to empower people with disabilities around the globe, and I believe that computer science is the tool to accomplish that dream.

Computer science is not only fun; it has helped solve so many real world problems in communication, productivity, and health that we take for granted today. It’s thrilling to know the kind of impact I could make.