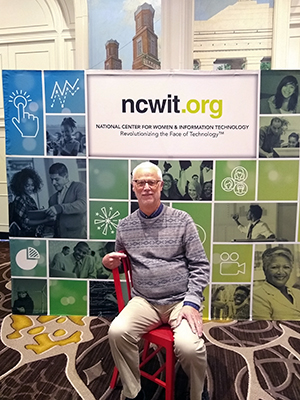 Ladner mentioned how special it is to receive an award named after his long-time colleague David Notkin, who was a faculty member at University of Washington (UW). Richard received the award at the 2019 NCWIT Summit on Women and information technology (IT). More information is on the NCWIT website.

Meanwhile, Jacob Wobbrock was inducted into the CHI Academy, which is recognized as the highest honor in the field of human-computer interaction. Each year, the Special Interest Group on Computer-Human Interaction (SIGCHI) recognizes six to eight scholars for their contributions to scholarship and innovation in the field.

Wobbrock said, “I am extremely honored to be inducted into the CHI Academy, and to join such a prestigious group of human-computer interaction pioneers whose contributions I have admired for decades. To receive the SIGCHI Social Impact Award two years ago and now to be inducted into the CHI Academy have been the highlights of my professional life, and I feel deeply indebted to the UW Information School, to the design: use: build: (DUB) Group, and to my current and former Ph.D. students and collaborators who have provided the environment and teamwork to make this possible for me.”

Jen Mankoff, a collaborator of AccessComputing and faculty member in UW's Paul G. Allen School of Computing Science and Engineering, was also inducted into the CHI Academy this year.