AccessComputing at the 2018 CRA Conference at Snowbird 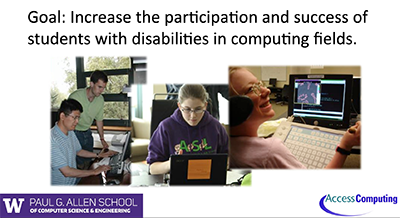 I, representing AccessComputing, was on a panel titled “Increasing Diversity in Computing is Easier Than You Think: Some Small Steps that Make a Big Difference” at the 2018 Computing Research Association (CRA) Conference at Snowbird, Utah, in July 2018. The attendees were leaders in research-focused computer science academic and industry units. One of the two themes of the conference was diversity. Other panelists were Mary Hall from the University of Utah, Diane Levitt from Cornell Tech, and Manuel Pérez-Quiñones from the University of North Carolina, Charlotte. More than 100 leaders attended the panel that discussed the types of programs and activities that are doable for most academic units, and particularly for units that feel they are currently not doing enough to increase diversity and retain a diverse student population.

To better include students with disabilities, I stressed four basic approaches: attitudes, infrastructure, curriculum, and faculty. For attitudes, he recommended being welcoming instead of just stressing compliance with laws such as the Americans with Disabilities Act. For infrastructure, he recommended having an accessible website, captioned videos, and accessible labs and offices. For curriculum, he recommended including accessibility topics in offered courses and highlighting common technologies such as optical character recognition, speech synthesis, and speech recognitions that were inspired by the needs of people with disabilities. Finally, for faculty he recommended hiring in areas such as human‑computer interaction that are attractive to students from diverse backgrounds. Slides from the workshop are available online in PDF format.