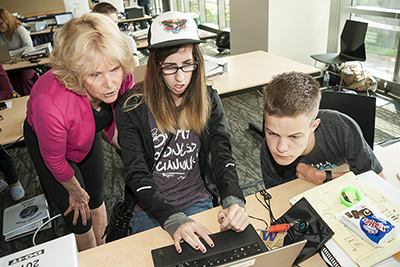 ​AccessComputing works to make sure that topics related to disability are included in diversity-related computing conferences. Some of our efforts are described below.

RESPECT: The first annual Research on Equity and Sustained Participation in Engineering, Computing, and Technology (RESPECT) conference was held August 13-14, 2015 in Charlotte, NC. The conference was sponsored by the new IEEE Special Technical Community on Broadening Participation. The purpose of the conference is to promote and disseminate research in broadening participation in computing. Richard Ladner gave the first keynote titled “Accessibility and Beyond.” He talked about meanings of disability and accessibility, and explained how research in accessibility has yielded advances in technology for everyone.

An interesting talk by Jane Stout focused on the benefits for deaf students found at specialized institutions such as Gallaudet University and the National Technical Institute for the Deaf at Rochester Institute of Technology. Other talks were about underrepresented minorities, women, and LGBTQ students at differing points in the education pipeline. The expectation is that the conference will be held annually and get larger as the number of people interested in broadening participation research grow.

Tapia: AccessComputing also continues to be involved with the Tapia Celebration of Diversity in Computing held in Boston in February 2015. AccessComputing was a Silver Sponsor. AccessComputing partner Shaun Kane delivered a keynote on “Superhuman Computing: Designing Custom Software and Hardware Interfaces to Support Our Natural Abilities.” Richard Ladner received the Richard A. Tapia Achievement Award for Scientific Scholarship, Civic Science and Diversifying Computing. In addition, we hosted a Birds of a Feather titled “Disability: Celebrating a Face of Diversity.”

Grace Hopper: Finally, Brianna Blaser continues to represent AccessComputing on the Grace Hopper Celebration of Women in Computing Underrepresented Women in Computing (UWiC) Committee. In 2015, the committee organized a luncheon, speed networking session, and panel presentations focused on underrepresented women in computing, including women with disabilities AccessComputing Team Member and Microsoft employee Katie Sullivan spoke on a panel titled “Bringing Your Whole Self to Work.” Several other Team Members attended Grace Hopper as well as the Tapia Celebration.