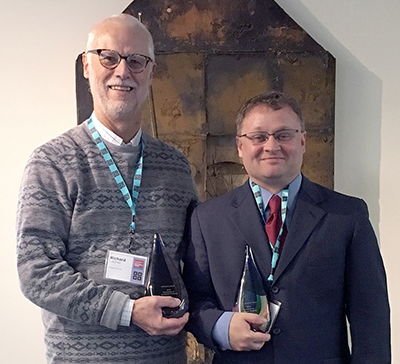 In December, AccessCSforAll PI Richard Ladner and the Quorum programming language, led by AccessCSforAll PI Andreas Stefik, both received Champions of Computer Science (csedweek.org/awards) awards from the Computer Science Teachers’ Association and Code.org. The awards were presented by Melinda Gates on December 3 as part of a Computer Science Education Week (CSEd Week) kickoff program held at the University of Washington. Melinda Gates described the award as a “lifetime achievement award” with a different name, so as not to imply it is the end of their work. During CSEd Week, the NSF also promoted AccessCSforAll’s work in an article about accessible tools and curricula.

As noted on the CSEd Week website, “While many organizations and programs have sought to make computer science available to all students, often it was through pathways and tools that were fundamentally inaccessible for students with disabilities.” Ladner and Stefik’s work aims to change this.