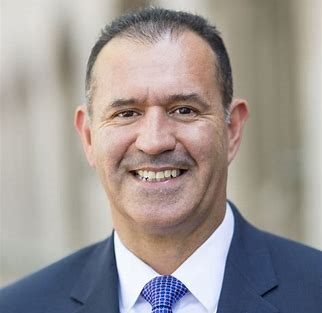 Today the Office of Minority Affairs and Diversity (OMA&D) at the University of Washington lost distinguished leader Dr. Gabriel Gallardo, associate vice president for student success. Dr. Gallardo joined the UW in 1993 as an admissions specialist for 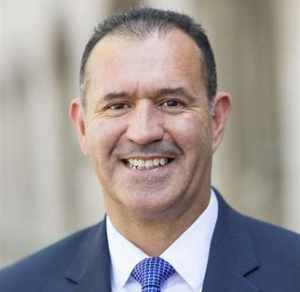 the Office of Minority Affairs. That year marked the beginning of a lifelong career encompassing an unwavering commitment toward ensuring underrepresented students have access to the highest levels of education. Over the course of his career, Dr. Gallardo has made an indelible impact within OMA&D through mentoring and coaching hundreds of students, staff members and colleagues both locally and nationally. The loss of Dr. Gallardo is deeply felt. We will always remember his dedication and tremendous contributions to students, OMA&D, and the University of Washington.

Dr. Gallardo was a lifelong Husky earning his bachelor’s, masters and doctoral degrees in geography from the UW. From admissions specialist to director of the Early Identification Program for Professional Studies, Dr. Gallardo assumed increasing levels of responsibility within the Office of Minority Affairs and Diversity and served the office in a range of leadership roles to help chart the course for diversity at the UW.

One of Dr. Gallardo’s early and significant achievements was founding the McNair Postbaccalaureate Achievement Program. In 1999, Dr. Gallardo wrote the grant for federal funding to establish the McNair Scholars Program at the UW, a program that recruits and supports underrepresented students to engage in undergraduate research and then matriculate into graduate programs and complete their doctoral degree. He was the program director and principal investigator from its inception. Because of this program, hundreds of students have been introduced to the possibility of a career in research and scholarship, and more than 175 of them are teaching, conducting research, and generating new knowledge at colleges and universities around the world. Dr. Gallardo’s reach was global.

As OMA&D’s assistant vice president for new initiatives, he provided administrative oversight for seven federally funded programs and coordinated various scholarship programs in OMA&D. His work managing the GEAR UP program continued his work of outreach to pre-college low-income, first-generation and underrepresented students. 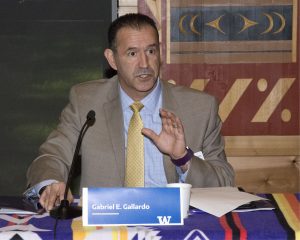 With his 2007 promotion to OMA&D’s associate vice president for student services and academic support programs (now student success), Dr. Gallardo continued to focus on the UW experience of undergraduate students and putting them on the path to graduate and professional school. He advocated for low-income, first-generation and underrepresented students at the institutional, state and federal level. He oversaw all of OMA&D’s retention and academic support programs, which serve more than 6,000 students annually. And he was an integral part in making sure the spaces those students use were inclusive and beautiful: He was deeply involved in the building of the Samuel E. Kelly Ethnic Cultural Center, one of the best cultural centers in the country, and the wǝɫǝbʔaltxʷ – Intellectual House. And he was integral in the process of OMA&D and UAA co-locating advising and experiential learning offices in Mary Gates Hall. In 2015, Dr. Gallardo stepped up to lead the Office of Minority Affairs and Diversity as the interim vice-president during a time of transition for the organization and as racial tension on and off campuses led to a historically difficult moment for the University and our nation.

Dr. Gallardo was a sage adviser on OMA&D’s Executive Leadership Team, providing strategic counsel and guidance to the vice president on programmatic priorities and implementation of policies related to diversity, student services and academic support programs.

The legacy of Dr. Gallardo’s poignant career of service to the Office of Minority Affairs and Diversity and beyond cannot be overstated. A quote from a recent award for Dr. Gallardo stated, “The award recognizes not just the excellence in mentoring students, but the impact your mentoring has had on staff and faculty across the UW, and at other institutions as well. We therefore present this award as a tribute to you as a mentor of mentors, whose impact is multiplied by the hundreds of mentees of your mentees, and more, on into the future.”

In addition to his reputation as an intelligent, values driven colleague, Dr. Gallardo’s compassionate leadership shined through in his everyday interactions. Known for his wonderful sense of humor, positive outlook and strong family values, Dr. Gallardo considered OMA&D his family, and made sure that everyone he encountered felt they belonged. Dr. Gallardo, affectionately known by some as Dr. Gabe, shared his family with OMA&D, sometimes bringing his beloved children and granddaughter in for visits. Many know the love of his life, his wife Veronica, who he met as an undergraduate at UW. For many in OMA&D and throughout the University, Dr. Gallardo was more than a colleague, he was a true friend, family member and treasured mentor. Our hearts are with his family at this time as we mourn this tremendous loss.

If you would like to share words of respect or donate to the Dr. Gabriel Gallardo EOP Fund, you may do so at https://bit.ly/3bkvGJ3