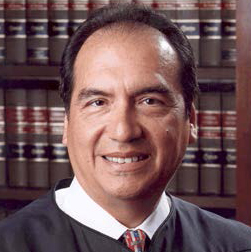 The Honorable Ricardo S. Martinez, Chief United States District Judge for the Western District of Washington, is the 2018 recipient of the University of Washington Charles E. Odegaard Award.

The award will be presented at the 48th annual Celebration event hosted by the UW Office of Minority Affairs & Diversity (OMA&D) and Friends of the Educational Opportunity Program (FEOP), Wed., May 16, at the Husky Union Building on the UW Seattle campus. This year’s event is featured among OMA&D’s 50th anniversary activities that are recognizing its legacy of excellence, diversity and inclusion.

Established in 1973, the Odegaard award honors individuals whose leadership in the community exemplifies the former UW president’s work on behalf of diversity. It was President Odegaard’s response to student-led calls for equity in 1968 that led to a university-wide commitment to diversity and the establishment of what is now known as OMA&D. The Odegaard award is regarded as the highest achievement in diversity at the UW.

A student activist at the UW during the movement for civil rights on campus in the late 1960’s and early 1970’s, Judge Martinez turned his desire to create change into a distinguished judicial career that has spanned almost three decades. He is the first Latino judge to serve on the U.S. District Court for the Western District of Washington.

“Judge Martinez embodies the spirit of student activism that inspired change both on our campus and in the community 50 years ago,” said Rickey Hall, vice president for Minority Affairs & Diversity and chief diversity officer. “And the work he has done in the judicial field is paving the way for countless others. We are incredibly proud to honor Judge Martinez and his commitment to equity and educational opportunity.”

Originally from the border town of Mercedes, Texas, at the age of six Judge Martinez moved with his family to the small farming town of Lynden, Wash., literally moving from one border to another. He was the first in his family to graduate from high school and go on to college when he enrolled at the UW.

As an undergraduate, Judge Martinez was part of the local and campus-wide Chicano/a Movement as a member of the Movimiento Estudiantil Chicana/o de Aztlán (MEChA). He participated in the first Freeway March in 1970, where students marched from the UW campus to the federal courthouse in downtown Seattle to protest the Kent State Massacre and the Vietnam War.

He also participated in the 1972 take-over of Beacon Hill Elementary School that led to the establishment of El Centro de la Raza and helped to informally recruit prospective Latino/a students to the UW.

After receiving a bachelor of science degree from the UW in 1975, Judge Martinez decided to pursue law school. He received his juris doctorate from the UW School of Law in 1980 and worked as a trial lawyer in the King County Prosecutor’s Office before beginning his career as a judge in 1990.

He went on to serve on the King County Superior Court and as U.S. Magistrate Judge for the Western District of Washington before being nominated to his current appointment by President George W. Bush in 2003, and confirmed by the Senate in 2004.

Judge Martinez has also made a priority to give back to the community that supported him. He is a founding member of the Latina/o Bar Association and the Washington Leadership Institute whose mission is to recruit, train and develop minority and traditionally underrepresented attorneys for future leadership positions in the Washington State Bar Association and legal community. He has also mentored numerous law students and lawyers of color.