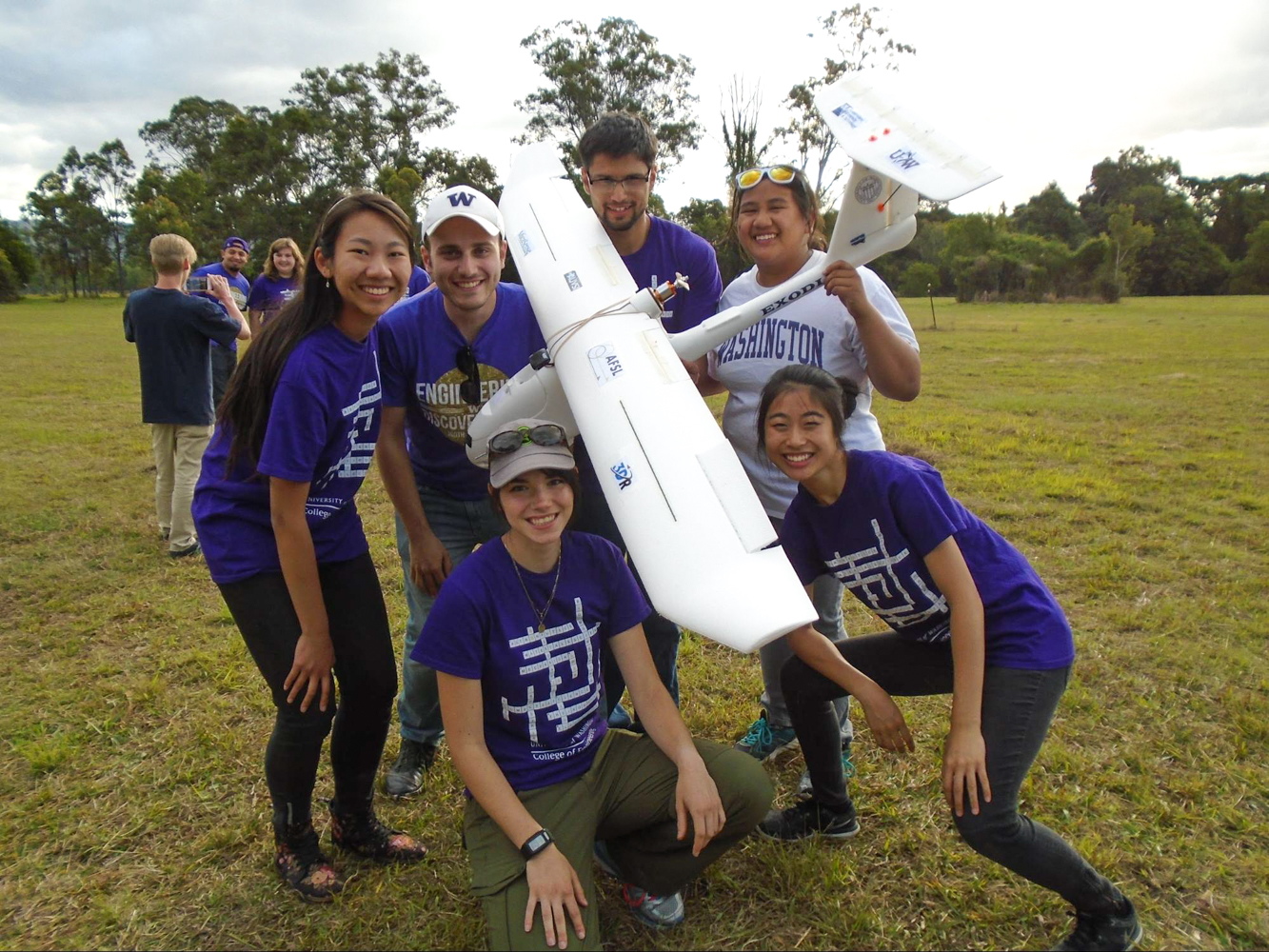 UW junior Lara Millman is currently documenting her experience with the OMA&D-affiliated study abroad program in Brisbane, Australia for the OMA&D student blog.

As the title implies, this post is primarily about the work we’re doing down here! For all those unaware of the actual point of this little excursion of ours down under, we’ve come to Australia in order to study the use of UAS (Unmanned Aerial Systems…popularly referred to as drones) in improving precision agriculture techniques. That is, using drones to fly above large tracks of land and gather data about the condition of crops on said land; an application that could do a lot of good for farmers both at home and abroad. And so for the last two weeks we’ve been hard at work trying to make that happen.

When we got here last week the 12 of us split into two groups of six and began construction on two UAS of the same fixed-wing model but with slightly varying payloads. One plane carried a point-and-shoot type camera and was named by the group that created it “Little Wing.” The UAS I worked on carried a camera that could shoot in five different spectrums of light (for those curious, it was a Micasense Rededge, capable of shooting in the green, blue, red, infrared, and “red-edge”) and was given the name “Exodia” after the Yu-Gi-Oh! Card of the same name (yes, we’re nerds; we rock it.).

This complexity of payload called for an opening in the bottom of both planes, out of which the camera would shoot pictures. But the plane itself landed on its “belly” (underside) and thus out of concern for the MicaSense a “door” of sorts had to be fashioned to protect and prevent scratching of the lenses.

Have you ever heard of Murphy’s Law? If not, the gist of it is “anything that can go wrong will go wrong” and that was DEFINITELY an aspect of building Exodia. The misfortune began on Tuesday, September 1, while we were working late to finish construction on the plane. At this point, we were trying to tighten bolts on the plane’s wings, rudder and elevator which, you know, are sort of important for controlling a plane in flight or whatever. Anyways, in order to do this you must connect the various moving pieces (flaps, ailerons, rudder and elevator) to servos that will then rotate on command up to a total of 90 degrees. But to make sure that you’ve connected your servos in the right orientation, you must first neutralize their position by applying power. As we were in the process of doing this, one of our lovely servos began to smoke, utterly and completely fried, which, when you want to put an expensive piece of machinery in very close proximity with it, will tend to cause anxiety. In short order we replaced the defunct servo but the next day, as we were getting ready to go out and do a flight test, our transmitter (the thing that actually controls the plane for more complex things such as takeoff and landing) was knocked from a table and two switches were snapped off. Yet still we hobbled on and managed to work around the broken switches (Thank you Dr. Lum and your awesome technical skills). Finally, we get to Friday, September 4, day of test at the Queensland University of Technology SERF site. No smoke, working controller, and a safe first flight (used to trim the aircraft). We replace the dummy load, which was weighted similarly to the real thing with the actual camera, and guess what happens? Just guess. (Remember that I opened this paragraph with a quip about Murphy’s Law.) Ding ding ding! You got it! Crash! (Or should I say “rough landing.”) In spite of even this though, we managed to repair all apparent damage to the plane and send it up on two data collection flights before the end of the day.

So what did I learn this week? And what is something that I hope you will take away from this story? Research is hard and things go wrong, a lot, but that doesn’t mean that it’s not worth doing. Because no matter the troubles we came across, nothing compared to looking up at that plane and seeing it fly itself around, collecting data in a process that could someday genuinely be of use to someone somewhere. For all you Galexy Quest fans out there: “Never Give up, Never Surrender”.