The Seattle Fandango Project, a local organization that promotes community through music, verse and dance, has been named the recipient of the 2012 University of Washington Vice President for Minority Affairs and Vice Provost for Diversity Community Building Award.

The award will be presented at the Multicultural Alumni Partnership (MAP) Bridging the Gap Breakfast, on Sat., Oct. 27, at the Husky Union Building ballroom from 8-10 a.m. The award recognizes a University of Washington student, staff member, faculty member, or community organization whose efforts toward positive change on campus have resulted in multicultural community building.

The Seattle Fandango Project (SFP) builds relationships with diverse groups in Seattle and fandango practitioners from other parts of the United States and Mexico, promoting joy, healing and social activism, while providing a welcoming space for families to make music together. Its practice is rooted in the fandango traditions of Veracruz, Mexico, and the broader community arts movement Fandango Sin Fronteras (Fandango Without Borders), built over the last decade by musicians and community organizers in Veracruz and California.

SFP first took shape in 2009 when Seattle area fandango practitioners, educators, artists and activists coalesced around workshops on the UW campus and in the community. The workshops were facilitated by Martha Gonzales, Quetzal Flores, Son de Madera (a band from Veracruz) and UW School of Music visiting artist Laura Rebolloso. 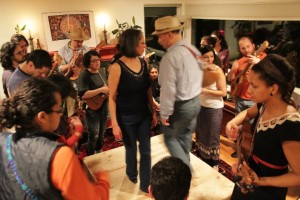 SFP facilitates exchanges with fandango practitioners from Mexico and other regions of the U.S., and strives to form relationships with diverse groups in Seattle and across the state. It looks for ways to support partners through the participatory practice of fandango to call attention to important social issues and help with fundraising and building community.

Learn more about the Seattle Fandango Project on its web site.