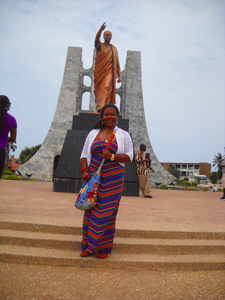 Yesterday we went on an all day field trip to the city of Accra. We got to go to the Kwame Nkruma Mausoleum, the Art Market, the W.E.B. Du Bois Center, and then we had dinner at a restaurant called Asanka Local.

The Kwame Nkruma Mausoleum was a very interesting place, and we had a tour guide who explained all about his life, reign as President and death. We learned that Kwame Nkruma was the first President of Ghana, he fought for and won Ghana’s independence, he named Ghana, Ghana, and he was a socialist and believed in Pan-Africanism. All over the walls were pictures of him with prestigious people such as John F. Kennedy, Martin Luther King Jr., the prime Minister of China, and lots of other leaders. Even Fidel Castro was at his funeral. We learned that he was a member of Phi Beta Sigma Fraternity, Inc. and that was really cool to me because that means he is my brother, since I am a member of Zeta Phi Beta Sorority, Inc. We learned that he had an arranged marriage and his wife was a beautiful woman from Egypt. They had three kids together, two boys and one girl and today his daughter is leading the political party that he started, while one of his sons is in a whole different political party. We learned that he was overthrown, unfortunately by a coup that got its support from the American CIA. The tour guide explained that America was seeing Ghana prospering and still wanted to be able to use all of its resources, so they decided to overthrow him. He was exiled from Ghana and moved to Guinea where he served as a leader there until he died. Today he is still a figure of importance and independence all over Ghana.

The Art Market was….very exhausting. Imagine going through the vendors at a State fair, add about 200 more vendors with much less space in between them and even more products. Now imagine everyone calling you over or coming and actually grabbing your hand and pulling you over to their shop. Being at the Art Market was difficult for me because I don’t ignore people and I want to try and help every person that I come into contact with, plus it is hard for me to say no and I feel bad about negotiating prices….even though you kind of have to do that here. It was pretty stressful, and I spent a lot, but all my purchases I really treasure and everything is beautifully handmade, so it wasn’t a waste by any means.

However there were some really great parts to it. I made a lot of friends and learned a lot from the people. For example, I didn’t bring a ton of money with me so of course, I can’t buy everything. Sometimes I would tell the person, “I’m sorry, I’m too poor.” And they would say, “You are not poor! You are living aren’t you? The poor are the people in the hospital who can’t eat, talk, or walk.” This was a good lesson to me, because I have been financially stressed a lot since I’ve started college and I sometimes complain about how poor I am, but they showed to me that as long as you are living, you are rich with life, which is the most important thing. Another lesson I learned there was about the importance of family. At many of the shops I went to, the people working there said that they were brothers and so many actually said that that I was confused. I actually asked Yusef, (my friend in the picture) what he meant, because he was at another shop separate from his and encouraging me to buy something from this man who he said was his brother. When I asked he explained that they were first cousins, but in Africa they consider first cousins as brothers and sisters and they make sure that they are taken care of. He even said, “If I run out of money, this guy will take care of me. Or if he runs out of money, I will take care of him. If I owe him money I will pay him, and if he owes me money, he will definitely pay me.” He went on further explaining that in this culture, it is all about taking care of one another. I told them how great I thought that was and how in our society competition is within everything. I even told them about how in Selah there are two separate car lots competing against each other and the owners are brothers, and they strongly disagreed with that. I agree with them. I think if families and people in general took care of each other more, the morale of people would be better and they would be taken care of for sure.

All the pictures we saw of him in school were when he was in his later years in life. There was a picture of him when he was four and he was very dark! I was surprised. The tour guide told us that he had a skin disease (probably vitiligo) that changed his skin from dark to almost all white. He then showed us an older picture of him and you can see the skin color variety in his hands and the lower part of his face. We learned about how because he was dark and people everywhere really did know that he was African American that growing up he and his family were made fun of and discriminated against which propelled his efforts in helping the Black Society throughout his long life.

Read more from Courtney on her personal blog.