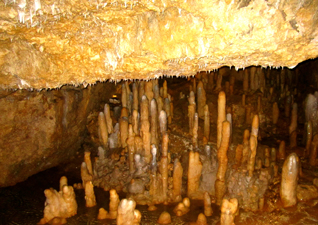 It’s been 10 days since I arrived on the beautiful island of Barbados. I must say it is everything I anticipated it would be and so much more. The island itself is amazingly gorgeous. The beaches are some of the most breathtaking in the world. When I arrived the first thing I wanted to do was go to the beach and run into the crystal clear water. Unfortunately I had to wait two whole days to do that, but the wait was definitely worth it.

Some other exciting things I have done so far are experience Bajan (Barbadian) nightlife, explore a cave, and interact with locals and people from other countries. The nightlife scene here in Barbados is very different from nightlife in the U.S., especially that of Seattle. Bars and clubs don’t close until 4 a.m., rather than the 2 a.m. curfew that we have at most bars in Seattle. The dancing is different as well. Many people like to “wuk up” which is how Bajan people dance to Caribbean genres of music. It’s difficult and a little shocking at first, but once you get the hang of it and get used to this style of dancing, it’s really fun and exhilarating.

On Friday we went to Harrison’s Cave, a crystallized limestone cavern, which is considered to be one of the wonders of the world.  It was beautiful. The tour felt like a rollercoaster ride because we had to drive in several tour cars that were connected to one another. I felt like I was in an Indiana Jones movie.

The most pivotal part of our trip has been the opportunities we’ve had to interact with and get to know local Bajan people as well as people from Trinidad and England. When we arrived to the dorms we were not alone. There also happened to be a group of national Trinidadian cricket players who were staying there as well for an international cricket tournament. The team ranged from 14-19 years old and they were the best of the best within their league. We talked with them about their own Trinidadian culture and how it differs from that of the Bajan culture. It was fun talking with them and getting to know them. We enjoyed their company and having them around the week that we spent with them. Unfortunately we had to say our goodbyes when they left for Trinidad on Friday. We’ve also run into many people from England while going out at night. The Bajans that we’ve met are all really nice people. They’re fun to be around and seem like they enjoy living here in Barbados. I can only hope to meet more local people during our stay here.