This article covers the following:

You can use the Sponsor Budget Map page to understand how your SAGE Budget personnel data will initially flow to the RR Detailed Budget form.

In the (01) Salary and Wages section on the Sponsor Budget Map page, you will see one row for each person on your parent budget and any internal sub budgets.

Based on the Project Role you selected for each person in SAGE Budget, each person will map to either the RR Detailed Budget Section A. Senior/Key Person or Section B. Other Personnel.

The columns in this section of the Sponsor Budget Map are:

Initially, you will see the personnel listed in the same Project Role order as on your SAGE Budget. Any personnel from internal sub budgets will display just after those on the parent budget, within each role.

Optionally, you can change the Personnel Order for those mapped to the RR Detailed Budget Section A by using the “Drag to Re-Order” feature (described below).

For personnel in Section B, in addition to the four default Project Roles, you can create customized ones.

When you first view the Sponsor Budget Map page, you will see the personnel listed in the same Project Role order as on your SAGE Budget. Any personnel from internal sub budgets will display just after those from the parent budget, within each role. 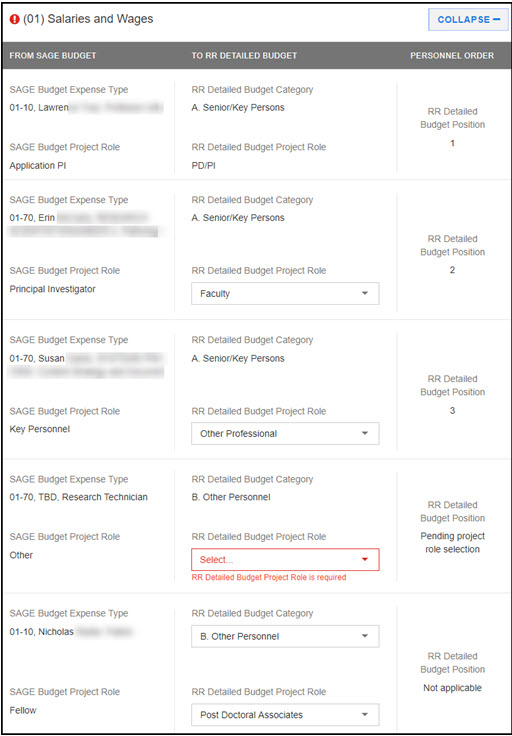 The following table defines the initial mapping rules and indicates whether the default value can be edited (changed).

If you selected Key Personnel for someone’s project role on your SAGE Budget, their sub-object code will determine the default role on the RR Detailed Budget.

As needed, you can change the role. Project Role choices for the RR Detailed Budget form are:

You can use this feature to adjust the order of the personnel mapped to Section A of the RR Detailed Budget. The Personnel Order column displays the text “RR Detailed Budget Position” followed by a number, indicating that person’s place in the order.

The Application PI (if present) will display on the first row.  If your budget does not include an Application PI, then the Principal Investigator will be listed first.

After the PD/PI or Application PI (if present), the default order of the personnel entries is by Category (Section A or B) and, within each category, by Project Role with Parent Budget and Sub-Budget personnel grouped together. For example:

You can use your mouse, or the keyboard, to choose a person’s row to re-order. Move the row up or down to update the position number for that person. Note that the form can list up to eight individuals. Any additional personnel are included in the Additional Senior Key Persons attachment, described below. The PD/PI must be one of the initial eight people listed.

Section A can display up to eight individuals on the RR Detailed Budget form. You must list any additional personnel in an attachment to the form. When you initially connect your SAGE Budget and Grant Runner application, SAGE will automatically generate and attach the PDF file listing any additional personnel. The file will be named to reflect the budget period. For example, the attachment for Period 3 of your budget will be named “Period_3_Personnel.pdf”. In addition, the system will calculate the Total Funds for Attached Persons value and display it.

Any time you add or remove Section A personnel from your SAGE Budget, or change their order on the Sponsor Budget Map page, the PDF attachment will automatically be recreated to reflect those changes, if necessary. 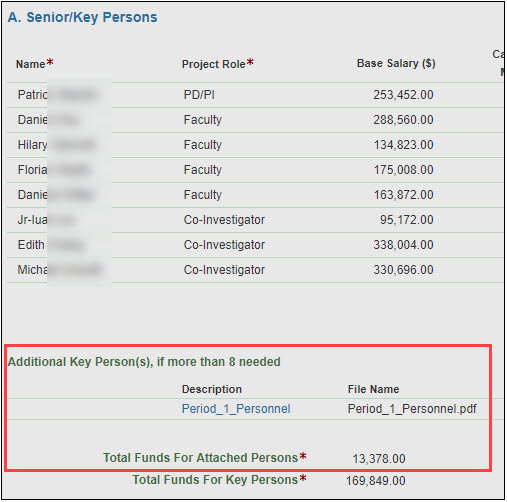 Personnel that map to Section B are combined into the appropriate rows, with their data values totaled.

If you select one of these SAGE Budget Project Roles, the individual will be added to the corresponding role in Section B:

If you select Other for someone’s project role on your SAGE Budget, that person’s sub-object code will determine the default role on the RR Detailed Budget.

When “Select…” displays, you can choose one of the four existing Section B roles listed above, or you create up to six different, customized roles.

Click on “Select…” in the drop-down menu and choose “Other…” 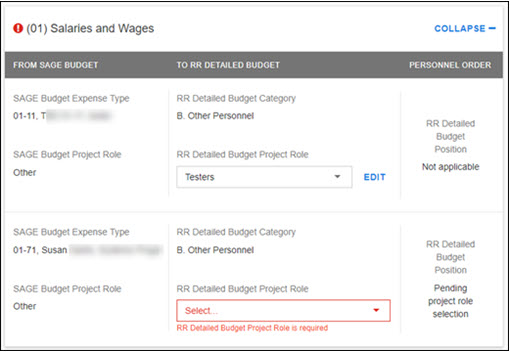 A dialog will display where you can enter the customized name of your project role for Section B. Click Save to return to the Sponsor Budget Map page. The new project role will appear, followed by an Edit link. 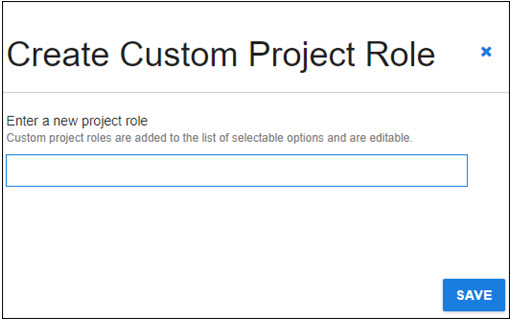 The following table describes the source data for each RR Detailed Budget field in Section A.

The source data for each RR Detailed Budget field in Section B is the same as that for Section A. In this section, the values for a given row are a sum of the values for all personnel with that specific Project Role: