This SAGE release provides the updated FORMS-G form set for NIH applications with due dates on or after January 25, 2022 that are eligible for submission through Grant Runner, UW’s solution for direct application submission within SAGE.

The following fields have been added to the SAGE API, allowing GCA significant time saving in their budget setup automation work.

The following issues with budgets that are connected to eGC1s have been resolved:

A minor issue with personnel ordering on the Sponsor Budget Map has been fixed.

An Export Control “Watcher” node will automatically be added to the eGC1 approval graph when one or both of the following data-related Non-Fiscal Compliance questions are marked “Yes”:

The following image shows an approval graph with the both the Export Control watcher and the EH&S Select Agents watcher. 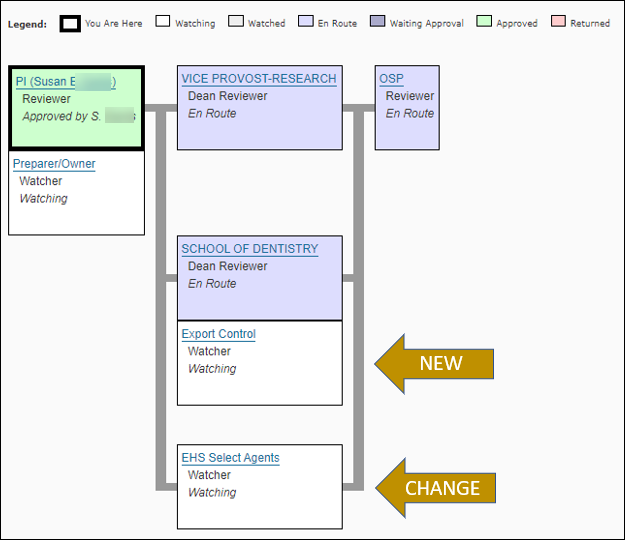 A help link has been added to the RR Subaward Budget and the PHS Human Subjects & Clinical Trials Study forms. Detailed instructions will guide Chrome users through the steps of downloading and opening the editable forms. The following image shows part of the form and the help instructions.

When RRF is listed as the sponsor, the Award Signature field now defaults to “Not Required.” The field will still be editable when the FA is “In OSP” status.

A new column can be optionally displayed on the SPAERC task lists for Funding Actions and Admin Actions The column will display the value selected in the WIAP field (Yes, No, blank). Users can sort the task list by that column. The following image shows the Funding Actions task list with the WIAP column highlighted. 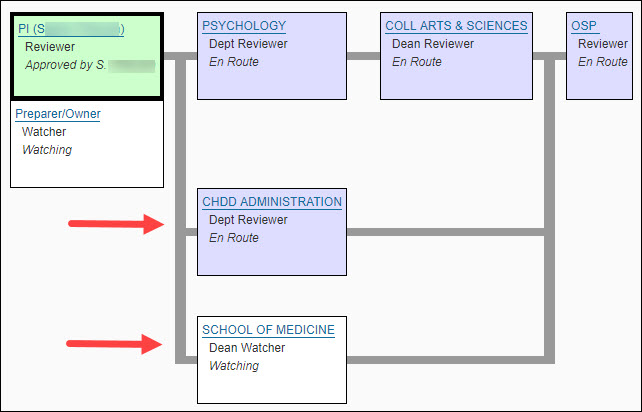 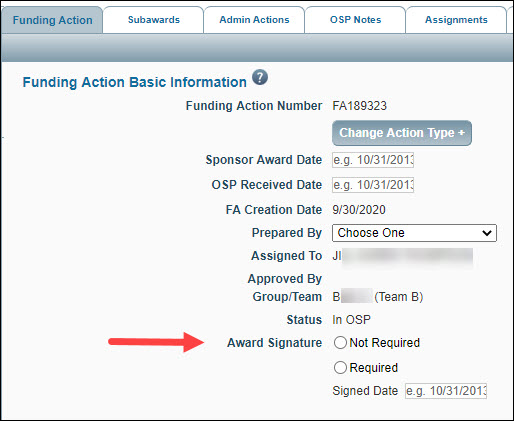 Updated list of Countries and States on Grant Runner Forms

Some minor updates to Forms F were made including improving some validations and updating the expiration dates on the following forms:

“ Review Required” has been bolded on the PI, Personnel, & Organizations page in SPAERC to make it easier for OSP reviewers to see.

These are the Grant Runner updates for Forms F:

The Sponsor Budget Map page will initially show where the SAGE Budget expenses will appear, by default, on the RR Detailed Budget.

The following table is a quick reference of which codes map to which sections of the GR Detailed Budget form. For full details view the Grant Runner Sponsor Budget Map article.

In order to give reviewers/approvers better visibility to the application’s sponsor deadline, the deadline now appears on the Approval Graph in the Application Details section.

The Assurance Statement for Principal Investigators on eGC1s has been updated to include a statement guiding them on their responsibilities for ensuring Multiple PIs from external organizations provide proper assurance, in compliance with federal regulations. The newly included verbiage reads as follows, and is visible on the Certify and Route page when the PI is logged in, and on their approval page when they have not yet noted their assurance:

If this is a multiple PI application, I understand that if I am the eGC1 PI, my approval of the eGC1 indicates I have obtained written assurances from external PIs named in this application that include this Non-UW Multiple PI Assurance Statement.

Non-UW SAGE users, such as partners as SCCA or Fred Hutch, were receiving errors when attempting to initiate new eGC1s. The system restriction has been updated, so that all persons with a valid UW NetID and an appropriate SAGE Astra Role can perform their SAGE duties as expected.

An issue was resolved where eGC1 preparers who had previously checked one of the Interdisciplinary Organizational Unit Reviewers to add to the approval graph, and then later wanted to uncheck the unit, were unable to do so. Users can now check and uncheck as necessary before completing the eGC1.

In the case where a location sourced from the GeoSims database does not have an address, the summary table on the Activity Locations page will now show the test “Not Provided” for consistency and clarity.

An issue with Firefox and locking/freezing of the Activity Locations page on edit has been resolved.

In order to clean up and clarify the salary distribution data presented to SAGE Budget users, the following updates were made:

The SF424 Grant Runner sponsor form will now default in the Federal Agency from the opportunity information retrieved from Grants.Gov, instead of the sponsor listed on the eGC1. This will improve accuracy on the Grant Runner form and reduce the risk of issues at the time of submission.

An issue has been resolved that was causing an error for users when they would navigate to the History and Comments section of the Approvals tab for an eGC1.

The SAGE team is focusing in 2019 on expanding and improving SAGE Budget capabilities, and streamlining proposal budgeting processes. This release includes several high-value features that were identified by budget preparers across campus who responded to a budget-focused survey and subsequent focus groups.

In SAGE Budget you can now indicate when the sponsor has a salary cap, allowing you to set a custom salary cap value from the newly-renamed Targets & Caps tab.

From the worksheet, you’ll be able to see what the cap is, and which personnel exceed it.

When you open the details for individual personnel, you’ll see their total uncapped salary in addition to their capped total for improved transparency. 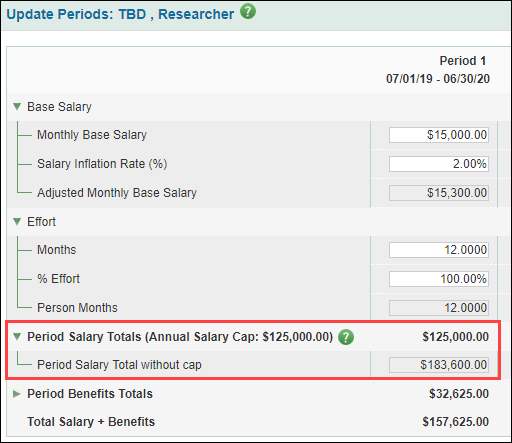 When updating the period details for personnel, you’ll now have better visibility to Period Salary Totals, Period Benefits Totals, and for the first time, visibility to the combined Salary & Benefit Total. This will make it easier to copy this total into sponsor budget forms, while also improving the layout to reduce scrolling. (See “Total Salary + Benefits” in image above)

Copying SAGE budgets and sub-budgets will now prompt you to update the Title of the new budget, and after confirmation will open the new budget in a new browser tab. This will make it more intuitive for you to identify the new budget from the original when copying.

Keyboard and mouse navigation in the expense entry screens has been improved to make the experience more intuitive and accessible. This will reduce the amount of time to enter expenses for users who navigate using keyboard or mouse.

The eGC1 Activity Locations page has been updated to make the entry of locations mirror the experience found on the Non-Fiscal Compliance page when entering Human and Animal protocols. This will make the entry experience more intuitive and the system more maintainable.

Testing of SAGE response time revealed that the Details and PI, Personnel & Organizations pages were slower than other parts of the eGC1. Those pages have been updated to drastically improve performance, allowing you to navigate with less waiting.

Compliance Question E-2 Has Been Updated

Non-Fiscal Compliance question E-2, concerning export of hardware, equipment, specimens, etc. has been updated to clarify that you do not need to report personal use laptops.

An issue causing the Country field to not display for manually entered Animal Use Institutions and Activity Locations has been resolved.

When using Grant Runner, you’ll now see a warning at the top of the Check for Errors pop-up if you choose an NIH funding opportunity that closes prior to the Sponsor Deadline on the eGC1 Details page. This will provide you with transparency to the conflict, but will not prevent you from routing the eGC1.

The Key Persons Expanded and Performance Sites forms on Grant Runner eGC1s have been updated to provide a more intuitive experience when entering Country and State. This also resolves an issue that could result in the State not saving.

Principal Investigators and Preparers of eGC1s to the Royalty Research Fund (RRF) will no longer receive the automated email sent from SAGE 3-6 days prior to the Sponsor Deadline when the proposal is marked as not ready for submission. This notification was not applicable to RRF proposals and caused confusion.

When an eGC1 is connected to a SAGE Budget, links between the two will now display on the My eGC1s and My Budgets task lists, making it quicker and easier to navigate between the two.

Prefix and/or Suffix fields added for personnel in SAGE Budget

Users can now enter a Prefix and/or Suffix for personnel in SAGE Budget. These will display on the Budget worksheet, and when using the Grant Runner Budget Sync feature will flow directly to the NIH RR Detailed Budget form on the connected eGC1. This ensures personnel will display on the sponsor form with their preferred titles/credentials.

The Certify & Route page of the eGC1 has been updated to make routing choices more clear and intuitive.

Additionally, when using a Grant Runner eGC1, as long as the eGC1 is marked “Ready to Submit” = No, users will now be allowed to route their eGC1s for review while there are still outstanding NIH and Grants.gov errors.

A new warning displays on Certify & Route page when there are grants.gov and/or NIH errors:

Defaulting logic for the Disposition and Carryover fields on Funding Actions has been revised to improve data accuracy.

The rules that govern who the default OSP reviewer will be for eGC1s that have been routed for review have been updated to facilitate the appropriate eGC1s being assigned to OSP’s new Contracts Team. eGC1s will be assigned to the Team C Administrator under the following conditions:

The Short Title on Funding Actions is now required in SERA prior to save in order to resolve an error that occurred when the Short Title was saved blank.