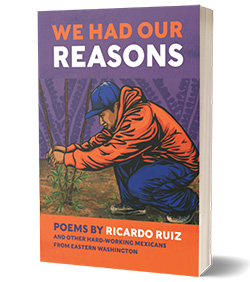 UW alum and former OMA&D student and now author, Ricardo Ruiz (’21), has published a book of poetry titled We Had Our Reasons. As described by Ruiz, it is a collection of poems he created in collaboration with other members of the Mexican farm community in Eastern Washington. “The poems, vivid and pointed, guide the reader through the thoughts and struggles that come with the decision to leave one’s home in Mexico, and travel to this remote, rural community of the United States.” Ruiz will be reading from his book and signing copies at the University Bookstore, November 15, 2022 at 6:00 PM. The reading is free, but registration is required.

Path to the UW

Ricardo Ruiz is a first-generation Mexican American, first generation-college student, UW alum, US Army veteran, small business owner, and now is a published author. He served in the US Army in an infantry unit for seven and a half years, and upon returning home attended Big Bend Community College in Moses Lake. He explains why he chose a community college first and how it just felt easier than jumping straight into an institution like the UW. “[At Big Bend] I had an amazing mentor who gave me brilliant wisdom. And transitioning from the military, as a former serviceman isn’t easy. So instead of going straight to the UW where you can get swallowed up by a campus, I went to the community college where it’s small classrooms, a lot of teacher interaction, and tuition was only five grand a year. I worked full time, paid for that out of pocket and saved my GI Bill for my undergraduate studies,” said Ruiz.

After studying at the community college, he was ready to transfer to the UW. However, he still needed just one class for his prerequisites to be met for admissions. “It was 2019. I came in as a transfer student and I wanted to attend Foster School of Business. I needed one statistics class to complete the requirements to apply,” said Ruiz. While filling out classes for the Fall 2019 term, he ended up enrolling in additional classes that would change the course of his education and his career path. “I also took Intro to Theater and the Holocaust in Film to fill the diversity credits that I needed.” It was the Holocaust in Film class that opened his eyes the storytelling and made him change his major to English and creative writing. “I thought I wanted to study finance. But while I really was transformed by the Holocaust in Film. Professor Richard Block was incredible.” Ruiz continued, “I sat there, and I was just like, I don’t want to do statistics works and the monotony of business anymore.” 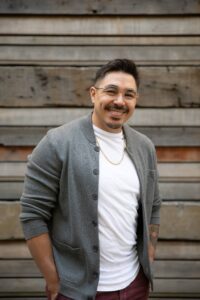 Like so many combat veterans, post-military Ruiz had been struggling with his own mental health, and by chance, a professor at the Big Bend Community College had given him a book of poetry to help him. Through poetry he found some peace, and while struggling with the intersectionality in his own identities, writing and poetry came as a form of self-discovery and a way for him to connect to different parts of his own past as well as the collective experiences of his community. It all came to head while taking a Spanish for Heritage Speakers class by Professor Maria Gillman. Ruiz recalls, “The class had me thinking about my parents, their own stories, their struggles to provide for me the opportunities to be at the UW, and what it means to be an American – as I was studying and struggling with my identity as a Mexican American student, a Latinx student, but also with what was going on politically. There were a lot of clashes in my identities.”

Close to completing his degree, he had a few 400 level courses left to cover. There were two courses he wanted to take, but the weren’t offered the same quarter so he came up with the idea to create an independent study on the exact topics he wanted to take in both courses – identity work through poetry.

Birth of We Had Our Reasons

Now under the supervision of Professor Francis McHugh for his independent study, Ruiz was on a path to complete his degree, and to publish his first book of poems. McHugh provided the guidance and instruction on different types of interviews and forms of poems, while Ruiz dug in to collect the stories of the people in his hometown migrant community of Moses Lake.

Ruiz was making good progress on the interviews and both he and McHugh saw the potential for these poems to be more than just an independent study assignment. Ruiz says, “at the end of the quarter, we had probably like five or six poems developed. Quite a few of the interviews were completed, and I had learned so much.” He continues, “ [McHugh] talked to the owner of Clyde Hill publishing, and she taught me how to write a book proposal.” Ruiz wrote his book proposal and before he even graduated, he  had a book deal set up for what would later become We Had Our Reasons. 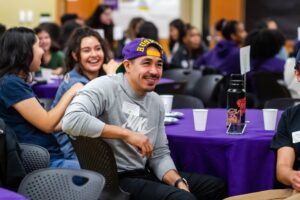 As a transfer student to the UW, Ruiz participated in the Mentor Power for Success program to help him adjust to life on a big university campus. As an older incoming student, it was a unique opportunity for him to also share some of his life experience with his assigned mentor. “I was paired up with a young man who was 22, and I was 35 at the time. So his experience at the UW was really helpful to just understanding the resources available and where they were at,” said Ruiz. The mentorship was not one sided however, Ruiz continues, “as for myself, being a former Staff Sergeant in the military, I was able to provide him just some of that adult understanding in planning. Just having this collaborative effort, where we were both mentoring each other in different ways, and it really gave me a friend on campus when I first walked in.”

As a TRIO student at Big Bend, Ruiz continued his participation in TRIO at the UW. He explains why he appreciated the TRIO program, and why even today he is encouraging his niece to participate in TRIO, “having counselors who understand the difficulties that come with being a first-gen student, with establishing yourself in a place where we are a minority, where it’s different and having a [TRIO] counselor so they can look a little deeper at your academic plans.” Ruiz found community at the Samuel E. Kelly Ethnic Cultural Center, and even found support at the OMA&D Instructional Center. In fact, he explains how the instructional Center played into the writing of his book. “I wrote poems from the book in there. I would go for just having a resource of a writing tutor at your disposal as I sat there just typed away. When I had a thought, there was another writer to bounce ideas off of. It was free flowing and creative.” Ruiz recalls that outside of the UW Vet Center, the Kelly ECC, and the Instructional Center were his two homes while on campus.

With an advanced degree on his mind, Ruiz is looking for programs where he can complete his MFA. As far as writing his next book, he already has ideas about how what he may want to tackle. While speaking about his military service, “I plan on doing the similar method that I used on this book. But instead, interviewing servicemembers about their reasons why they enlist. Why we make that choice in a complete volunteer force, especially at a time of war. It’s a very unique experience, and there is value in the stories that come with service.”