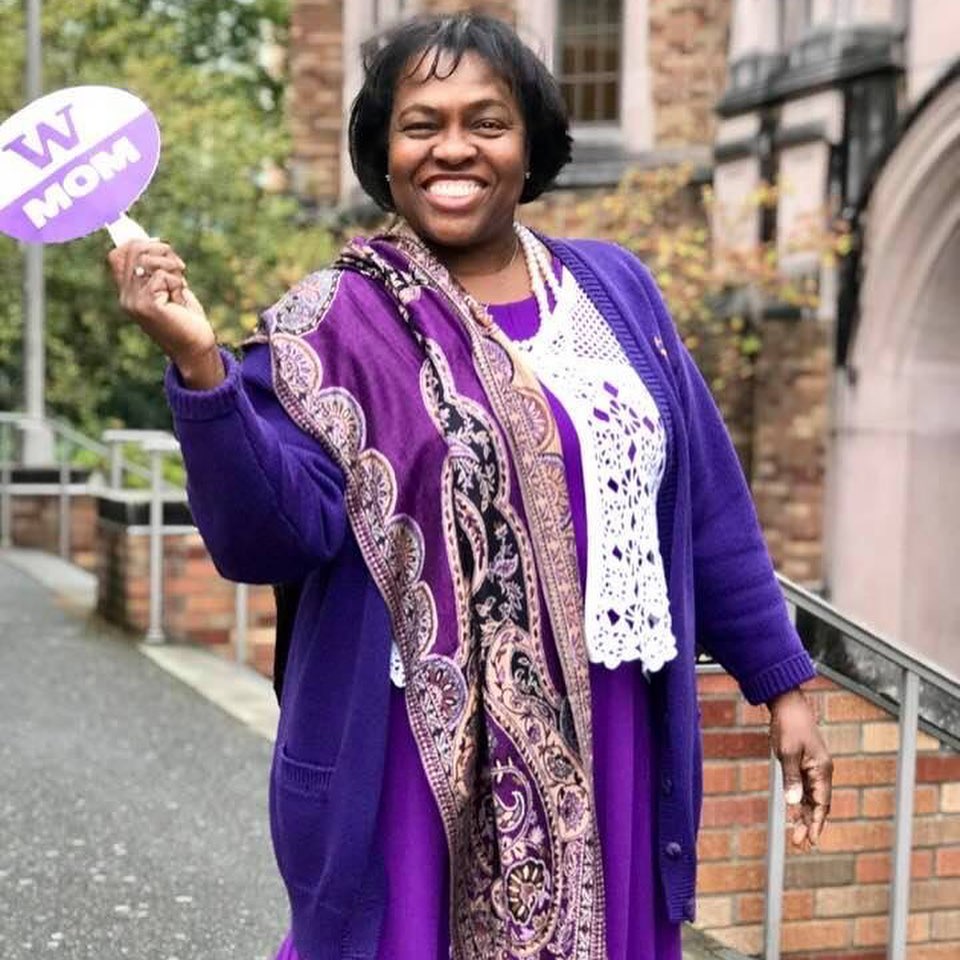 Dr. June Summers Hairston, commonly referred to by students and colleagues as Dr. June, has worked for the University of Washington for almost 38 years. She began as a Student Activities Adviser in 1979 and worked with ASUW Commission Directors and registered student organizations for six years. Dr. June’s education journey spans four decades, three colleges and universities, and culminated in earning her doctorate in education in 2015. On her path to achieving her top degree, as a first-generation college student life met her along the way with challenges, illness, and various roadblocks – all of which she overcame.

About to graduate high school in Saint Louis, Missouri, June Summers, one of thirteen children, had set herself a goal – to attend community college. Dr. June remembers her ambition early on, “I wanted to go to community college. I knew a four-year college was out of the picture.” Her parents encouraged her to pursue her dream but did not have the money to send her. “I broke down and started crying and thought there was no hope for me.” Her mother was able to pay for her first quarter of community college, but then it was up to June to find a way to pay for the rest. She did not know it then, but this initial support and encouragement from her family set her on a path that would change her life and the lives of generations to come. June worked during the day to pay for her night classes. It wasn’t easy, but she made it work. “That’s how my community college experience started, with tears, disappointment, and hard work.”

June was attending community college when she met Roland, her future husband, while he was in the military and just returning from the Vietnam conflict. She married Roland at age twenty and moved with him to Seattle, Washington. While waiting for her in-state residency to apply for college, she worked at a daycare center in administration, where she studied Music and Early Childhood Education at Seattle University. Leaving the daycare, June also lost her ability to continue her studies which placed her education on hold, but after some time away she reflected on her path in life and decided it was time to make a change. “I saw my life going before me without completing my degree. I just got so upset one day that I left my job and started driving around the city. I just happened to pass Seattle University.” She pulled into the parking lot in front of the psychology building and by chance was greeted at the door by the dean. “He showed me that with my previous credits, I could graduate in one year with the BA degree in psychology, which gave me the motivation to finish my degree.” With a growing family of two children ages 6 and 4, she graduated with her first degree from Seattle University in 1975. He sister Shirley Houston graduated with a BS in Nursing a year prior in 1974.

Dr. June’s graduate degrees were not any easier to achieve. Common to many first-generation college students, she had never learned about graduate school until a friend visiting the UW for a summer study encouraged her to apply to study for an advanced degree. “She said, ‘June, you ought to go into graduate school. Promise me you will apply.’” Not only did Dr. June apply to the UW and get admitted into her program, but she also finished a two-year program six months early, earning her master’s in Educational Psychology, with a concentration in College Counseling in 1978. Taking time off from studying to focus on family and work, she began the path to her doctorate in 2006.

Later, Dr. June would find out that she was one of five students out of the more than three hundred applicants selected for the doctoral program and that her strong personal statement (based somewhat on her work with students in OMA&D) was what set her apart. “I felt so humbly honored to have been admitted.” However, between admission to her program in 2006 and completion of her Ed.D. in 2015, she was diagnosed with breast cancer in 2012 which slowed her progress. June said, “I did not have time for breast cancer. You know, I was really focused, and I did not want to get distracted.” She took time away from her studies to focus on her health and well-being but jumped right back into completing her doctorate as soon as she was able.

Dr. June has spent her career encouraging and supporting UW students to reach for the stars and achieve their dreams. She has led by example to both the university and students she serves, but also in her own family. Being the first in her family to earn her college degree put future generations of Summerses and Hairstons on a different path. She passed on the lessons she learned attempting college as a first-generation student on her own to her children and grandchildren. “It was easier for them because they had somebody who had already blazed the trail. We have had benchmarks along the way – signs along the way so I could tell them, ‘Now when you get in this situation, this is what you do.’ Or if they feel like they are the only one in the classroom and nobody connects with them, they must create their support network.”

Education is a crucial element of the Hairston household. Dr. June has five children and two unofficially adopted children. “Four of my five children have graduated from college. They went to college with us. Back in those days, you could go to the library and bring your kids and leave them down in the children’s section, which is what we did, and we would be upstairs in our section just studying.” Attending a university was not an exception – it was the expectation. “Our kids knew they were going to college because their mom and dad both had degrees.” Of her thirteen grandchildren and two great-grandchildren, five are college-age. Of those five, one graduated with a STEM degree and is pursuing Medical School, two are pursuing their bachelor’s degrees, one at UW, and the other is a transfer student planning to attend UW winter quarter in 2023. Another grandson is a US Army veteran with college credits, and one is pursuing a career in the arts.

A great point of pride for Dr. June is the Husky legacy in her family. Her son Roland Jr. studied Sociology, and her son Russell, also majoring in Sociology was recruited to play Husky football as a first-year student. She recalls, “It was an exciting time on campus when the Huskies won two consecutive Rose Bowl games, lost one, and then won the National Championship game, known as the ‘Whammy in Miami’ [in 1994]. During this game, Russell intercepted the ball and took it to the ‘HOUSE’ for a touchdown, turning the tide for winning the game!”

June Summers of Saint Louis, Missouri, with some tears and disappointments along the way, her faith, and a lot of grit and perseverance is now Dr. June Summers Hairston, director of the Pacific Northwest Louis Stokes Alliance for Minority Participation (LSAMP) in STEM. As a first-generation college graduate, wife, mother, grandmother, and great-grandmother – not only has she changed the course of her family’s lives for generations to come, but Dr. June has also spent more than 38 years of dedicated service to the University of Washington, 32 of those serving OMA&D students and their families. One of Dr. June’s most well-known quotes which she came up with when applying to the Leadership and Policy Studies Program in Education highlights her impact on both her family and the generations of UW students she has served. “Few are called to impact the masses, but many are called to impact a few.”