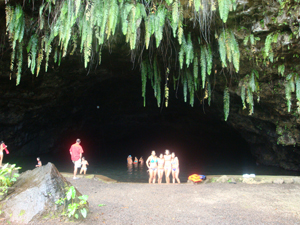 by Veronica Sedano (written on August 12)

Week three was a bit more relaxed. We spent the majority of our time out in the water. We started off at a cave by the name of Grotte De Maraa. The cave’s arched ceiling creates and optical illusion that makes the cave look smaller than what it really is. It is a major attraction here in Tahiti.

That week we were also able to visit the Gauguin Museum. The Gauguin Museum is very well known because of his artwork during his stay in Tahiti. Paul Gauguin first came to Tahiti in 1891. He saw in Tahiti a chance to develop his art as well as developing an affinity with the indigenous people of Tahiti for whom he had a great admiration. It was nice to see the museum they have here in Tahiti because it was where we were able to compare and contrast his artwork with the ones we were able to see at the Seattle Art Museum prior to our departure to Tahiti.