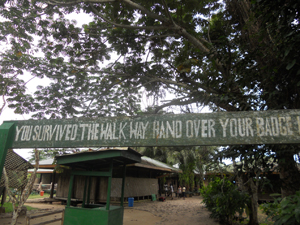 We took a tour of the castle, which was still preserved pretty well. The conditions that the Europeans kept the Africans in were horrific. The male dungeons occupied as many as 1,000 people at one time in a combined area that was no bigger than about half of a football field. In these small, dark chambers people ate, slept, sweat and defecated in close proximity for weeks, sometimes months. At least 1/3 of the Africans died before the ships even arrived and while the death tolls range from 2 million to 100 million, the deaths of enslaved Africans within the 400 years of the slave trade outnumbered the amount that survived the trip itself.

Being a descendent of Africans in the slave trade who endured being torn from their communities and families, the torture, the long and grueling middle passage and countless other monstrosities really made me grateful of what my ancestors had to go through for their survival which ensured my existence today. It was really hard to imagine what enslaved Africans went through, but being in the castle really resonated with everyone, regardless of their race.

After a really emotional tour of the castle, we traveled to Kakum National Park—an undisturbed evergreen rainforest that has 40 meter high canopy walkways that are suspended between trees.

Crossing the seven high bridges tested our trust in each other. But we all finally made it to the end as a group.

Then we drove to our hotel for the next few nights. It is right off of the coast and the scenery is beautiful!