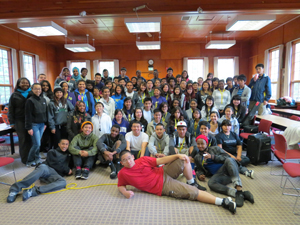 The desire to attend college isn’t necessarily a reality for all high school students, especially those from low-income backgrounds who may also be the first in their families to pursue higher education. Thanks to the Office of Minority Affairs and Diversity’s Upward Bound program, that mindset is changing for nearly 80 students from Seattle’s Franklin and Cleveland High Schools.

Federally-funded by the U.S. Department of Education, Upward Bound is a three-to-four year program that provides college entrance support to low-income and/or first-generation students from both schools. Students enter the program as 10th graders and remain until graduation.

During the summer, Upward Bound hosts a six-week academy on the UW campus during which students attend academic, college prep, and elective classes Monday through Thursday, and participate in a field-trip excursion on Fridays. This year’s Summer Academy began on June 25 and will wrap up on Aug. 2.

Most courses are taught by UW instructors and are considered to be an elevated step from the students’ current academic level. The lecture topic this year was taught by Dr. Oliver Fraser who presented the same Astronomy 101 class he delivers to UW freshmen and sophomores. In addition to math, technology and language arts courses, students also have the option of taking electives like ballroom dancing, American Sign Language, art, calligraphy and the appreciation of opera.

“We try to create a curriculum every summer that they will not see in a high school setting, but will address the need for college information,” Upward Bound director Leny Valerio-Buford said.

One of the most critical courses is the college prep class, taught by Valerio-Buford, which also doubles as language arts. Because most Upward Bound students do not have parents who can tell them what college is like, class discussions can get very personal.

“I’m always amazed at how open they are with each other,” Valerio-Buford said. “Sometimes we talk about the dysfunction at home, and you get a real sense that if it were not for this program, there is no way that child would be able to overcome the difficulty of thinking about college, let alone figuring out how to pay for it when their family can’t even afford to pay for electricity.”

College wasn’t on Jasmine Brown’s mind when she entered the Upward Bound program. But her opinion has changed now that she is finishing her last Summer Academy.

“It makes me want to go to college so much more,” the Franklin High School senior said. “I remember as an incoming freshman, I was kind of antsy about the whole thing. I wasn’t really a big fan of school. It really wasn’t my first thought and now it’s all I can think about. I’m so ready and excited to go to college.”

According to Valerio-Buford, the students reap several benefits from spending the summer on a college campus.

She says the Upward Bound students not only benefit from seeing first-hand how college students and professionals interact with each other, they are exposed to a form of positive peer pressure from their Summer Academy classmates. Older students are modeling positive behavior and an interest in pursuing college.

“So instead of belonging to a gang, which could happen in their schools, this is ‘what do you want to do after high school, what career do you want to pursue?’ over and over again,” Valerio-Buford said. “Everywhere they turn it’s always college prep, college prep.”

“This whole experience being on the campus and being treated as a college student helps getting prepared,” Franklin student Laraysha Tramble said. “They help us with financial aid and all that stuff that we need to get ready for college. It really helps. It makes you feel more independent and you don’t feel as stressed or worried about the pressure college is going to put on you.”

Summer Academy instructors are enthused by how seriously the students take the classes. “They’re coming in to be students,” American Sign Language instructor and Woodinville High School teacher DJ Jacobsen said. “They’re here to learn and they’re here to study. They’re not taking it for granted, like a lot of kids in high school.”

Brown and Tramble are not taking Upward Bound for granted. Tramble hopes to attend the UW-Seattle, and if not, either the Tacoma or Bothell campus. Brown regards the UW as a top choice, however she also has her sights set on going to an out-of-state school like Howard University in Washington, D.C. or Spelman College in Atlanta.

The Franklin classmates can agree they are sad to see their participation in the Upward Bound Summer Academy come to a close.  The final awards ceremony will be held on Aug. 2 at Kane Hall (5-7:30 p.m.)

Learn more about Upward Bound on the program’s web site.