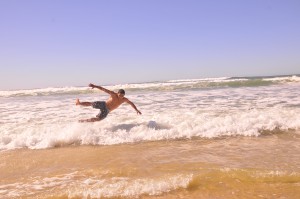 Two weeks down already? This is insane. Hey blog readers, hope your summer is going well. The third week is just starting up so I thought I’d give you a review of the second week of our excursion! I don’t even know where to begin. This has been an amazing trip so far and everyday (and night) has had its own share of amazing experiences. The week started off busily as we cranked through some coding and began to really learn how we were going to apply our gained skills when we go out to the Moreton Bay Research Facility. The week was full of farmer’s markets, long days of coding, and beautiful walks over the bridge to and from class.

The latter half of the week was definitely the highlight. On Thursday, the group took a trip to Springbrook National Park at night. Before catching a Greyhound into the park itself we stopped and had T-bone steak dinners at a golf course and a few of went to the driving range while waiting for the bus. From there we took the bus up into the mountains.

It had been raining lightly all day, but the tour guide informed us that the rain would make the glowworms (native only to the park) more active. By the time we reached our destination the rain outside the bus had become palpable.  Decked out in my Northface shoes, rain jacket, waterproofed jeans, and Tilley hats I was ready to go. The group split in two and we were led quietly into the rainforest amidst the downpour. The guide pointed out all sorts of plants, some poisonous and some not. As we descended deeper into the wild growth, the rain seemed to press down harder. Some were soaked before we even reached our destination. As we walked the rainforest around us began to light up with blue-green specks against all the walls and rocks. The deeper we went, the more vibrant the luminescent creatures. If you’ve seen the movie Avatar – it resembled that in some ways. After about half an hour we arrived at the mouth of a cave and the guide had us kill our torches (flashlights). As if by some sort of magic, the cave began to light up with a hundred thousand blue-green lights. It was breathtaking to say the least (and nice to get out of the rain for a time). After getting back to the bus, everyone was soaked to the skin and a low rumble from the storm was easily heard outside the bus ride home.

The next day, we all went to an Australian rugby game and watched the Brisbane Broncos take on the Sharks. The game was good and it was fun drawing parallels between American Football and Rugby. The next morning, the students woke up early and caught a train down to a place called Surfer’s Paradise on the Gold Coast. I’ve been fortunate enough to travel around the world and I can easily say that this was the most beautiful beach I had ever set foot on. The water was perfect, the sand soft, the sun shining, and everyone was smiling. The lot of us stayed in a hostel called Surf n Sun less than a hundred feet from the beach and the entire day was spent bathing in the sun and playing in the surf.

If you want to see more photos, you can check out my facebook linked at the bottom of this post. The Australia albums are all public! Anyway, the evening was fun as we explored the nightlife with fellow backpackers and saw everything that the Gold Coast had to offer. Early the next morning, Elliot and I woke up to watch the sunrise over the beach. A long and sleepy bus ride later, we were back in Brisbane ready to start the next week. I can’t believe we’re already halfway through!