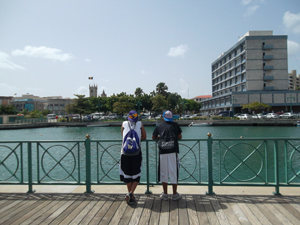 Twenty-one University of Washington students left Seattle and made it to Barbados in one piece. On the way we laughed together, ate together, and survived the 10-hour flight together. As a group we expected sunlight, not for it to be raining like Seattle weather. One thing we did agree on was that a little rain wasn’t going to stop us from swimming in the Caribbean. That was just day one…

In our first week here in Barbados, we also had the opportunity to explore Bridgetown, the capital city of Barbados, during the day. We took a cab from campus to Bridgetown. The cab system here is really similar to the experience I had in Mexico. The cab driver stuffs his cab, takes the fare of two Barbadian dollars during the ride, and gets you to your destination in the blink of an eye. Walking through the city I caught myself saying, “I am in Europe.” The architecture of the buildings here in Barbados is influenced by British architecture which makes sense because Barbados was ruled by Britain until 1966.