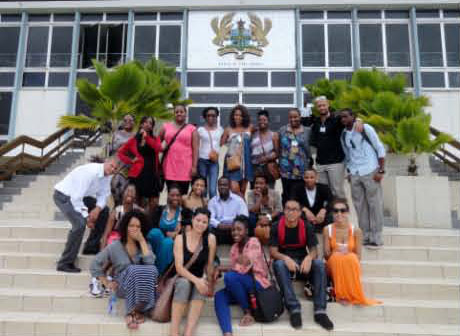 by Crystal Florez (written on July 28)

Touring parliament and the Commission of Human Rights and Administrative Justice (CHRAJ) in the Ghanaian capitol, Accra, was one of the greatest days on this trip thus far.  We learned a ton about Ghana’s history and it’s progression as a nation since independence in 1957.  Most of us found the present day complexity of the Ghanaian government structures supporting both roles of tribal leaders, as well as parliamentary leaders, to be very intriguing.  I found it encouraging seeing the Ghanaian government display such accommodating and progressive policies regarding tribalism.  Although the Ghanaian government has quite the history, including colonialism, it has been able to make remarkable changes in support of its Indigenous population, traditions, and culture.

Kwame Nkrumah, the first prime minister of Ghana, was the leading man of Ghana’s independence and was greatly influenced by a familiar name to us in the United States, W.E.B Du Bois.  Later on in the afternoon, we got the incredible experience of going to the mausoleum of the influential Kwame Nkrumah.  I encourage everyone if they haven’t already learned of Nkrumah to go out and read about him, his philosophies, and Ghana’s history.  The history is fascinating and can serve as a precursor to any study of various minority empowerment seen come to fruition in the 50’s, 60’s, and 70’s.  I don’t think anyone expected to learn so much in one day.  In between our assorted destinations, we managed to eat lunch in a picnic area in the mausoleum.  We noticed some primary school students eating lunch as well and began to engage with them.  These students we met were amazing!  They weren’t very old (a range of elementary student age), however, they were exceedingly intelligent.  We began a trivia battle and were amazed to find out how much more they knew than us!  Ghana had already enthralled the hearts and minds of many of us just from learning the rich history, its peoples and traditions…and now it had done it again!