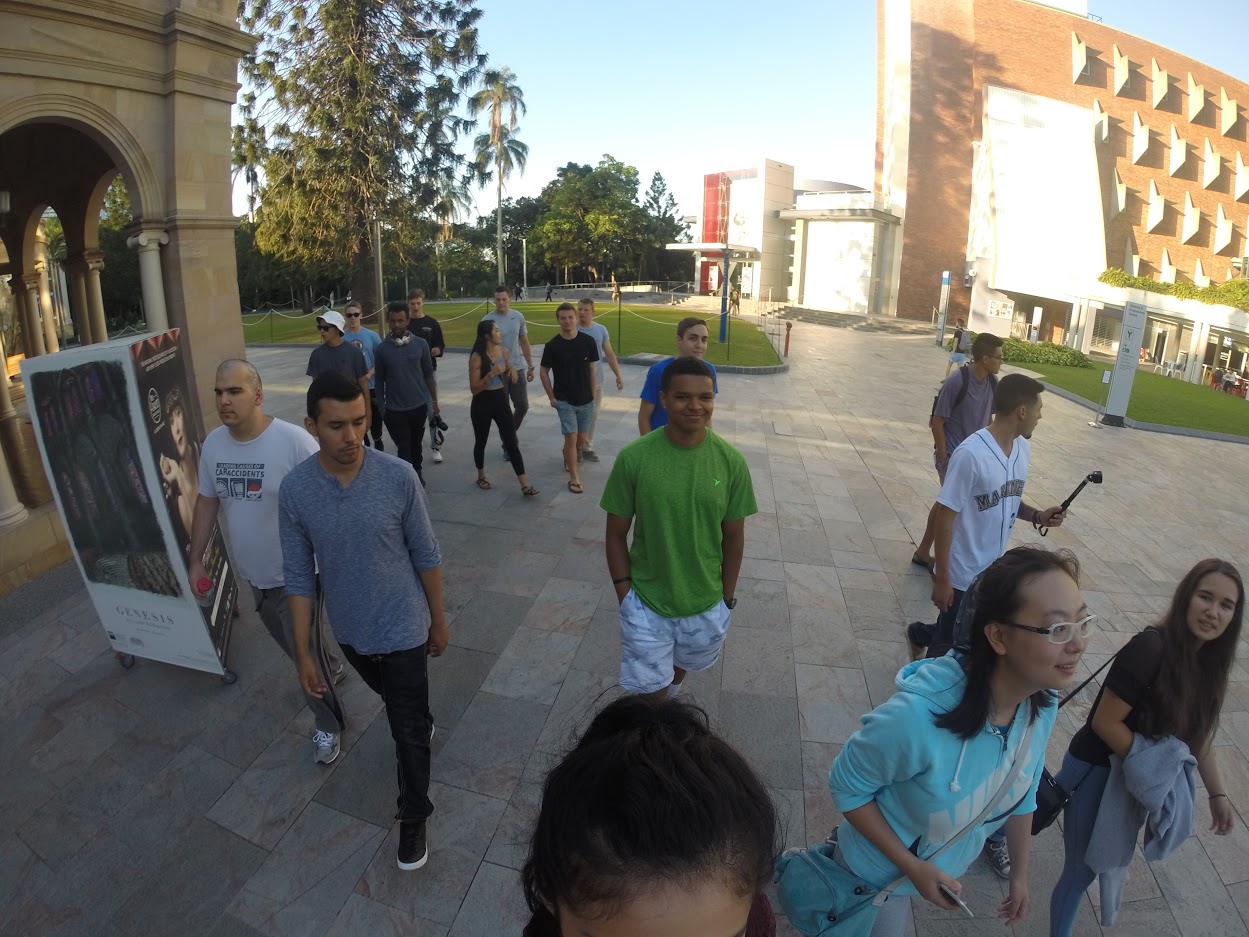 UW student Natasha Aurora Van Damme is currently in Brisbane, Australia with the OMA&D-affiliated exploration seminar studying how autonomous robotic systems can be used for biological monitoring purposes. During the group’s time “down under,” Natasha will be sharing regular blog updates started with her first entry below.

My name is Natasha Van Damme, or just Nate, and I was one of the students granted the incredible opportunity to travel abroad to Australia to study Oceanography and Engineering. I am a sophomore Pre-Engineering student and was originally largely motivated to come to Australia with the knowledge that I could learn more about Engineering.I would be lying if I said another large part of me didn’t just come to Australia for the cultural exchange and the exciting wildlife.

It has been four days since the 14-hour plane ride to Brisbane and I can say with confidence that that trip has exceeded my expectations. I have been swept away by the fast pace of our course which is why I have neglected my blog until today. We have done so much and the first days are always significant so I want to have an entry dedicated entirely to day one. And here it is!

On the very first day, after we unpacked and ate of course, we were given a brief tour of the school I would be studying for the next four weeks, Queensland University of Technology (or QUT).

Originally I was not too excited to see the campus if I am being honest. I was beat from the plane ride where I didn’t sleep a wink because of the uncomfortable seats (nothing is worse than a middle-seat when you are still unfamiliar with the people you are wedged in between) and I really just wanted to sprawl out on our comfy beds to finish my book. I got on the shuttle anyway since a part of me knew if I didn’t go I would probably end up getting horribly lost on the first day.

The shuttle ride from our living accommodations to the campus was under half-an-hour and was easy enough for me to feel comfortable that I could get to school without ending up lost. When I got off that bus though…I couldn’t believe I ever wanted to skip out on the tour. I stepped right off the bus and felt like I was about to stumble headfirst into a park. I probably could have stumbled right into the park if there weren’t the tall fence guarding the grounds.

The City Botanic Gardens is right next to the university–students can walk right out of class and into the park to eat their lunch!  I think it is significant to add that the garden was drop-dead beautiful too. There were lush, green lawns right off the stone path that weaved throughout the garden. Fronds of bamboo shot out of the ground and creaked high in the sky. There was a pond hidden in a grove of trees with a fountain in the middle. I think I was most impressed by the incredible trees they had throughout the park. Growing up surrounded by mostly pine trees I had no idea how wide and intricate a tree could get. I remember thinking as I looked up at one of the trees that it looked like it belonged in a fairytale or a Tolkien film.

QUT’s campus definitely rose up to meet the park in the beauty competition. Whether the building was very old or brand-new it was built to impress. The campus had an astounding mix of the new and old that felt completely natural and right. Even though it was just a brief tour I could pick out a couple of places I already loved. There is an outdoor lounging area next to a blackboard-wall that has a more modern look. It has a lot of seating options but my favorite part has to be the squishy, colorful seats that are dotted throughout the area–I could already picture myself snuggling up with my laptop for a good study session (or more likely watching a bit of Netflix).

Another feature that I got strangely attached to immediately was something right out of the building I would be studying in, the S building. Right outside of the S-block is a series of bridges/walkways that that extend from the doors to the rest of campus. To other people it probably didn’t seem that significant but something about using a bridge to get to your class just appeals to me on some weird level–maybe it stems from my childish attachment to fairytales where they have to lower the drawbridge to get into the castle. S-building was my brand new castle.

It was a wonderful, if short, tour but it had to be brief since we would be getting a more extensive tour on our first day of class.
I ended the day feeling one thing: ready.