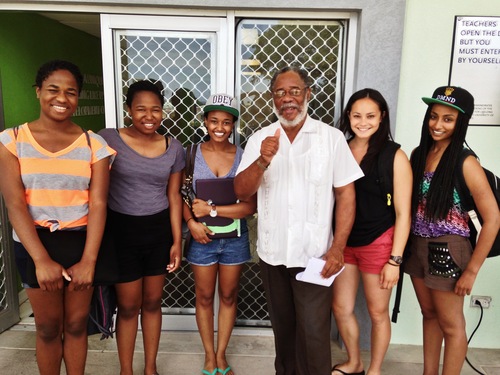 It’s hard to believe that two weeks of the program have already gone by! We are getting familiar with the island-luckily for my poor sense of direction, it is only 20 miles long by 14 miles wide. As one saying goes, “Barbados is 20 miles long and a smile wide.” We have continued our study of the island’s rich history, rooted in Amerindian civilization and eventually colonization and enslavement. Trips to museums and historical sites have complemented our time in the classroom with some of Barbados’ esteemed professors, researchers, and students.

At the Barbados Museum and Historical Society we saw the Conch Man, an Amerindian figurine carved to depict a bound prisoner. Findings like this uncover the indigenous heritage present in prehistoric Barbados. The item at the top right corner of the photo is a “sailor’s valentine.” In the 19th-century, locals would collect shells and make beautiful arrangements for the sailors to gift to their sweethearts back home. Beneath that photo is a painting by Agostino Brunias. The museum featured several of his pieces, all of which he depicts Blacks in positions of subservience, with less detail that whites, and in the background behind white subjects.

Our group excursions have also landed us at some of the most beautiful natural landmarks I have experienced. We made it to the Animal Flower Cave in northern Barbados (named for the sea anemones you can find in the pools).

We have seen the crashing waters of Bathsheba, and the stunning views from Cherry Tree Hill.

I am feeling more connected to the island, the locals, and my peers with each day. While certain traits of the island stand in stark contrast from my own lifestyle and environment back home, certain qualities feel familiar. At home, the hustle and bustle of the city keeps me on the run. I find myself prioritizing time and punctuality to a strenuous extent at times. The pace of life on the island takes on a fluidity that was an adjustment at first. In two weeks I find the island-style of time has given me some perspective about my prompt-planner ways and helped me relax in that sense. The local sense of unconditional hospitality and family value mirrors that of my own family. It’s common to greet unfamiliar faces as friends and that has given me that home away from home comfort.

As the second half of the program begins, we will be focusing on our final projects. We have become familiar with the island’s history, and seen how tourism shapes the tourism-dependent island. The social, environmental, and economic influences are embedded all around us. After speaking with locals about their varied opinions on the effects of tourism, it is clear that the positives of this industry come with certain downsides. Installments of posh shops clash with Barbados’ natural beauty.

Local businesses compete with foreign-owned all-inclusives to retain the gains on the island. Americanized styles of music and dress are popular among certain groups, placing a value on associating with American culture over Barbadian nationalism. As the final weeks of the program unfold, we will all be engaging in ethnographic work, research, and collaboration to deconstruct our observations of the island. Ralina and Reece have led us in challenging our thinking, and “rupturing the narratives” with which we are socialized to understand.

1. The island’s biggest celebration of the year, Cropover is approaching. It began during enslavement as a celebration at the end of sugar-cane harvest.

3. Barbados bases its education system mainly off Britain’s and is free of charge- UWI students’ tuition is free

4. One type of local dance is called “wukking up”

5. A saying from the island: “Water does run, but blood does clot.” (friends come and go but family is forever)