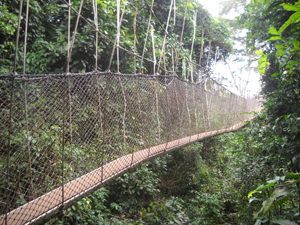 Today we got back from our field trip to Cape Coast. We got to go to two Slave Castles, the Kakum Rainforest and a small village for some community service. We also got to stay at Coconut Grove, a very fancy place that was right on the ocean! I felt like I was a rich woman staying there, it was fun staying at a ritzy place like that. 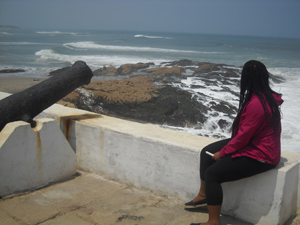 The first stop that we made was at the Cape Coast Slave Castle. I personally didn’t know what to expect. But it ended up being a very powerful experience. Our tour guide gave us a lot of information regarding the castle and the time, who owned it, and what exactly went on there. The little that I learned about slavery in school, I heard all about the Middle Passage, but nothing about how the Africans were held in the slave castles before they were able to be placed onto a boat. The castle was big and beautifully constructed; it was interesting to imagine having that kind of structure back in the 1400’s. We learned about how it was used as a trading post for the Triangular Trading system between the U.S., Europe and Africa and how in exchange for goods-Africans were traded. They were captured and brought to the slave castles. Their ankles, necks and wrists were shackled and immediately upon arrival they were branded with the initials of the company that had traded them. The conditions they faced were horrible. There were up to 200 men in a small room in the dungeon that our group of 20 barely fit comfortably in. They had to eat, drink, puke and go to the bathroom all in the same place. The floor was made of bricks but you could not see them because it was covered with all of those things. Many men died in the Slave castle and even more died during the Middle Passage. Many people have questioned why the Africans were kept in such poor conditions-wouldn’t all the deaths equal a loss of equity within the trading system? The answer is that it didn’t really matter because when the slaves got to America they were auctioned off at a very high price and it made up for the money loss in the trade. To go with that, the men were very strong when they were captured so they treated them that way so they would become very week and suppressed and would not be able to fight back. Our tour guide explained to us that the women had it even worse. Not only did they eat, sleep, drink, puke, urinate, and defecate in the crowded area they were forced to stay in, but they also had their monthly period there and were not able to wash up. So many, many women died. 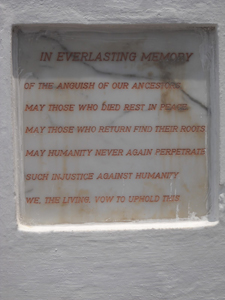 It was a very sad place to be, but as we discussed more about the story of the African-it became clear to us that this story is not one of sadness-but of triumph. What other people were captured from their beautiful homeland, placed in shackles and sent to a slave castle for months where many of them died, survived the 6-8 weeks of the Middle Passage surrounded by death, germs and sorrow, auctioned off like animals and separated from their families, survived 400 years of slavery, rapes, beatings, deaths, suppression, humiliation, Black Codes, Jim Crow, segregation, lynchings, debt peonage, convict leasing, and racism? And through all that we were able to succeed, stand tall and conquer. To think that it was our ancestors who did all of this makes me even more proud. African Americans should be very proud of who we are and what we come from; we really are some of the most triumphant people in this world.

The Kakum Rainforest was amazing! We had to walk over seven big swinging bridges and it was very scary, especially for me because I am afraid of heights! It was good for our group because we really got to encourage each other and help each other out in hard times. It was a challenging but fun opportunity. I know that I was hanging on for dear life to the ropes, because the drop down to the ground was faaaaar away and I kept imagining what you always always see in movies whenever there is a swinging bridge-for a wooden plank to break and you to fall through-but luckily that never happened and we all made it across just fine to the end of the adventure.

The last thing that we did was travel to a small village near Cape Coast to read to the children at their local school. In order to get into the many villages around here you have to go to the Village’s Chief and Elders to meet them and let them know of your intentions for your visit. I was kind of scared because I didn’t know what to expect, but it was very nice. We got to go to the palace and shake hands with the Chief and all the elders. They were so sweet and very happy that we were there to help the children of their community. One of the elder’s names was Rose, and when I told her that was my middle name, she fell in love with me and even gave me her address so I could mail her a letter. It was very nice. After we met with them, they walked us to the school and we got to meet some children and read to them. We also got to have a tour of the school, which was very small but very nice compared to many of the other schools that I have seen so far over here. This school even had a small library, and all the children said they loved to read. Before we left the Chief told us to make sure we spread the word about “the Chief who loved to read and help out his community.” They gave us drinks and a bag of coconuts as a gift for coming to their village.

Read more from Courtney on her personal blog.