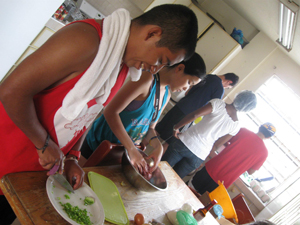 At the beginning of the third week, we had the privilege to cook with Mrs. Reid. From her cooking lesson, I learned different ways spices are used here in Barbados and among my peers. We used mild peppers to add flavor to the ground beef. Then there were spicier peppers that we added to make the lasagna spicy. I felt the amount of spicy peppers we chopped would not make the lasagna spicy at all. My cooking partners dared me to take a bite of the spicier pepper, so I did to prove them it wasn’t spicy. Everybody including Mrs. Reid thought I would rush over to get a class of water. I held my own and continued to prepare lunch for the group.

In the middle of week three we got private tout of the Nidhe Israel Museum and then of Bridgetown by Dr. Watson. Dr. Watson is truly the most interesting man in the world. From being a white Bajan, being able to speak Spanish, and being an honoree Jew. He is a prime example that you shouldn’t judge a book by its cover. He took us on a quick tour of Bridgetown and pointed out something that most people wouldn’t catch about the architecture. 1700 Amsterdam architecture is across the street from 1900 New Orleans architecture.

At the end of week four we went on a hike. Our guide, Aries had a lot of information about nutrition. He doesn’t eat potatoes, carrots, or big tomatoes because man has manipulated these vegetables. After trying everything he gave us I asked him about education. He said, “They teach you what they want you to know, not what you want you to know.” Overall the hike was amazing knowing that not many people get to see this part of Barbados.

During the fourth week, we got to tour the Mount Gay Rum factory and got to taste the finest, oldest brand of rum in the world. Our tour guide made us stir the rum in our glass and smell the rum before we tasted it. Few brands are inherently linked to their native land as Mount Gay is to Barbados.