The System to Administer Grants Electronically (SAGE) is the tool that researchers and grant administrators use to prepare proposals for approval and submission to the funding agency. At the UW, the appropriate campus units, compliance offices, and the Office of Sponsored Programs must review and approve all grant and contract proposals.

The Approvals component of SAGE manages the electronic routing of the proposal for approval. It is also used to manage the approvals for Advance Budget Requests for funded proposals.

This guide describes the functionality of the Approvals component for both eGC1 applications and advance budget requests.

Occasionally, there could be a difference in the eGC1 PI and the PI on the sponsor’s application, for example, in the case of career development applications.

To designate an Application PI, select that role for the person after adding them to the PI, Personnel, & Organizations page. For additional information on research team roles, review the UW Research Personnel page.

If the Application PI is a UW person, SAGE will add the Application PI to the Approval Flow and send an approval required email notification at the appropriate time. If the person selected does not already have an ASTRA role for SAGE,  a warning message of “no access: ASTRA permissions required” will display in red once you select the Application PI role. You will need to give them access, so that they can approve the application.  There are two non-PI researcher ASTRA roles that could be used.

As part of the approval process, the UW Application PIs are required to certify the PI Assurance Statement which appears in the approval dialog.

Principal Investigator/Program Director Assurance: I certify that the statements in this eGC1 and the related sponsor application are true, complete and accurate to the best of my knowledge. I am aware that any false, fictitious, or fraudulent statements or claims may subject me to criminal, civil, or administrative penalties. I agree to accept responsibility for the scientific conduct of the project and to provide the required progress reports if a grant is awarded as a result of this application.

I am the PI and I have read and agree with the PI Assurance Statement. I understand that approving this eGC1 electronically is equivalent to my signature.

The following image shows the assurance statement in the approval dialog. 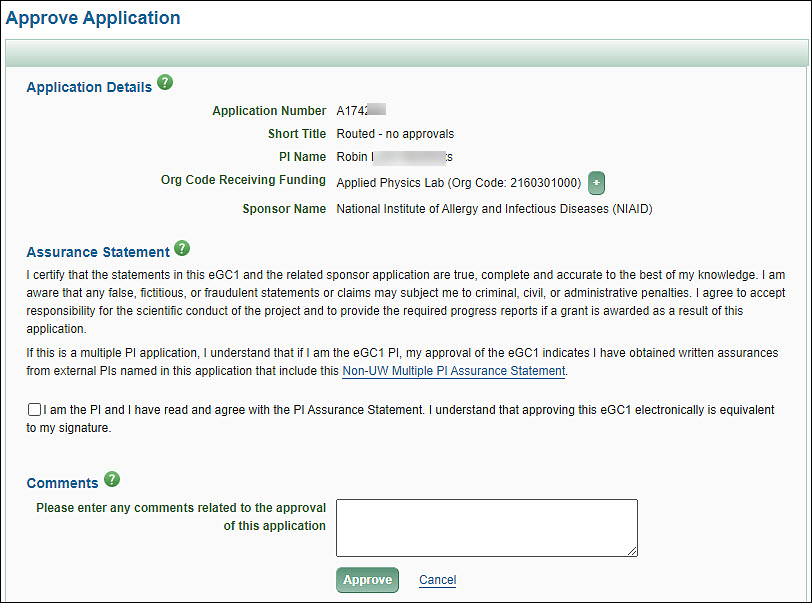 For Grant Runner applications, the person designated as the Application PI will appear as the PD/PI on the SF 424 and Key Person Expanded forms.

If the Application PI is a non-UW person (an affiliate), SAGE will not add them to the approval graph. Since they have a NetID, they could be given access to SAGE and added as an ad hoc approver to the graph. The eGC1 PI is responsible for securing assurance statements for those non-UW Application PIs. The following steps describe the paper process.

One exception exists for those mentored opportunities in which the PI listed in the SF 424 application form is not the same as the UW PI on the eGC1. This situation occurs when the PI on the application form does not meet UW PI eligibility requirements and the mentor is listed as the eGC1 PI. For these K Award activity codes that draw applications from individuals ineligible to be a UW PI, another method should be used for sponsor form completion, or wait to complete the eGC1 until the mid-September SAGE release when that capability will be delivered.

While checking for errors on individual forms in Grant Runner, you see more of the NIH validation errors display. This expansion focuses on identifying those fields required by NIH but not by Grants.gov. For Example: the Research Plan – Specific Aims attachment, which is required by NIH for opportunities other than DP1 and DP2.

You can now view or print a single Grant Runner form and its related attachments in the PDF format used by NIH reviewers. This feature offers an easy side-by-side comparison of the form with the eGC1.

NIH requires the use of application packages with a Competition ID of ‘FORMS-E’ for due dates on or after January 25, 2018.

Opportunities using FORMS-E will begin to post on October 25, 2017. In preparation, we have completed development on  FORMS-E for all existing Grant Runner forms, plus the new Career Development form. These changes will not be visible to users until the FORMS-E opportunities begin to post in October 2017.

The following FORMS-E Grant Runner forms are ready to go, when the opportunities that utilize them post in October:

The new Human Subjects and Clinical Trials form will be released in October, 2017, and more information on that form will be shared out closer to that time.

When you click the “View Grant Runner Forms (PDF)” link, you no longer see the word “submitting” while the system is generating the PDF. This change prevents unnecessary confusion.

Large file sizes on Grant Runner attachments were preventing the full application PDF from rendering, due to size limitations enforced by the server. The size threshold has been increased to the level recommended by Grants.Gov.

The Office of Animal Welfare changed their business processes and will no longer review the following eGC1 application types:

eGC1 users no longer see the “Animal Subjects” reviewer on the approval graph, for the above application types.

Fix:  Broken links in the footer of the eGC1 task list

At the bottom of the task list, the “About SAGE” and “Learning” links are fixed and you are directed to the appropriate support documentation for those topics.

An issue arose following the Workday implementation whereby manual updates that investigators made to their title were not saving properly, and instead were being overwritten by the Workday titles. This issue has been resolved.

An issue has been fixed for SAGE Budgets that utilize Sea Pay where previously opened/expanded sections of the budget worksheet were closing on SAVE.  These sections will now remain open on SAVE.

The Update Periods page for SAGE Budgets that utilize Sea Pay has been updated to move the SAVE button from the bottom to the top of the page, for a more consistent user experience.

This page is where you indicate

SAGE will pull in Financial Interest Disclosure System (FIDS) data to provide the disclosure and PHS training status for all personnel who are investigators.

The Additional Organizational Unit Reviewers section allows you to add reviewers for joint academic appointments, TBA personnel units, space and/or resources, and any other reason.

The Common Interdisciplinary Organizational Unit Reviewers section allows you to quickly select a unit and add their reviewers.

Note: You should keep the PI and Personnel list up-to-date throughout the life of the research project.

The Approval Flow doesn’t include an expected department. How do I add that department?

If the approval flow is not displaying a department or unit that you expect, review the values on your eGC1 in these areas:

If the unit still does not appear, use the Additional Organization Unit Reviewers section of the PI, Personnel, & Organizations page to add the unit.

How do I add additional reviewers to an eGC1’s Approval Graph, such as IACUC?

For IACUC, once your sponsor has indicated that you are likely to be funded for your grant application (you have a fundable score) you will need to have the Institutional Animal Care and Use Committee (IACUC) review your eGC1. Your application will be in Approved status at this time, so you will add them as a Watcher. This will send an email to the committee alerting them that their review is needed.

If you modify your eGC1 after the PI or other reviewers have approved it, when you re-route it, the system will continue with the next approver. SAGE does not automatically start the approval process over from the beginning.

If significant changes are made that would modify the commitment of a unit, then the unit should be added to the approval flow using the Add Approver process.

If you change the PI, the organization receiving funding, or the answer to some compliance questions, the approval flow may change.

How do I manage eGC1 changes during the approval process?

You can Withdraw an eGC1 that is routing for approval, which makes it editable. Once you have made your changes, click the Route to Reviewers button on the Certify & Route page to re-complete the eGC1 and move it back into the routing process. This will display a pop-up window for you to enter notes about the changes. Make sure your browser is not blocking pop-ups.

There are eGC1 approval rules for each unit on campus, based on organization code. The schools and departments determine what rules they need which are then coded into SAGE.

There is a rule for each of the following.

For each of these rules there may be 1) no action, 2) approval required, or 3) watcher access. If rules are not defined for a specific organization code, then it inherits the rules from its parent organization.

Each unit on the Seattle campus has three possible levels of review – Division, Department and Dean. These levels correspond to the SAGE ASTRA roles of Division Reviewer, Department Reviewer and Dean Reviewer.

For example, the routing rules for Approvers (A) and Watchers (W) for the Applied Physics Lab (a department) and Health Metrics (a division) are:

For example, Bothell-Business Total defines its rules at the Dean’s level, so any departments within that organization code would follow the same rules.

SAGE creates the approval flow (graphical and text) based on data in the eGC1 and the routing rules for each school/college. The flow displays which personnel and unit or compliance reviewers should review the eGC1 and its attachments.

Once you enter an organization code receiving funding and a PI for your eGC1, the system can generate a draft version of the approval flow. This can be viewed from either the PI, Personnel, & Organizations page or the Certify & Route page of the eGC1. As you add other research personnel, other data such as cost sharing, or responses to compliance questions to your eGC1, this draft version of the graph will reflect those changes.

When you route the eGC1 for approval, SAGE creates a final flow and sends out the initial approval notifications. If you withdraw the application, or a reviewer returns it, when you re-completed it, the system re-generates the approval flow to adjust for any changes you make to the eGC1. Any approvals that had already occurred will not change after the eGC1 is re-routed, unless affected by the data changes made to the eGC1.

The approval graph appears the same for all reviewers, with the exception of the bold border that indicates your approval node on the graph and the Reason for your review information in the Approval Status Data section. Most people only have one role, so the border will always appear around the same approval node.

If you have more than one approval role, you may see an application listed more than once on your My Approvals page. You will need to approve for each role separately.

For more information, see the sections on Reviewers and Compliance Reviewers.