This chart describes when and to whom the SPAERC system sends email notifications. The content of the auto-generated emails varies depending on the choices the sender makes. Select a link in the Email Type column to display an example of the email contents.

You can add holds to Applications, Funding Actions, or any type of Admin Action. You can also modify or remove existing holds whether added manually or automatically by the system.

There are two categories of hold reasons: Non-Compliance and Compliance. 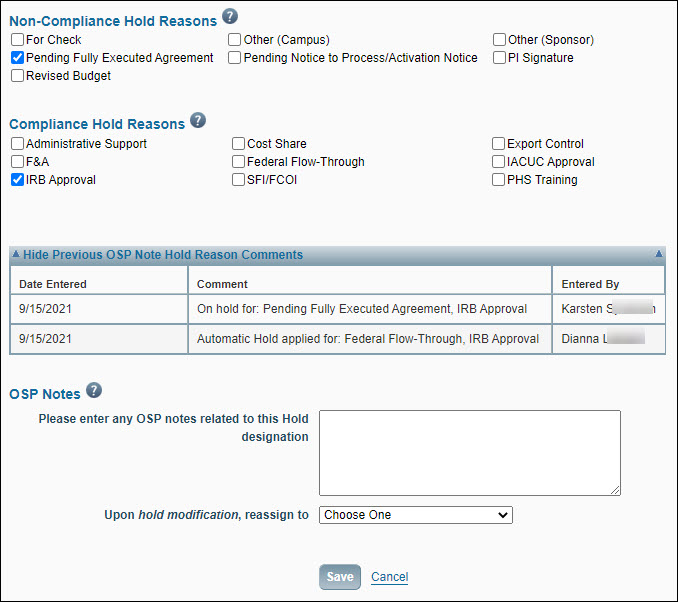 Note: When you open the Add/Modify Hold dialog window after the first time, you will see an expandable bar below the list of holds titled “Previous OSP Note Hold Reason Comments.” Click on the bar to expand the section.  A table displays that shows the date entered, the comment, and who the comment was entered by. The same information also displays under the OSP Notes tab. Clicking the bar again will hide the table. This section is shown expanded in the above image.

A yellow “On Hold” banner will display at the top of the item’s details page. The following image shows the banner on a Funding Action.

Modify or Remove a Hold

When a SAGE user completes an eGC1 for the first time and moves it into Routing status, the system assigns the eGC1 to a group/team and to a person who is the Administrator or GCC. There are a number of factors that contribute to the assignment.

Re-Completed eGC1s: When a campus user re-completes a withdrawn or returned eGC1, the system may change the group/team assignment in response to changes made in the eGC1. However, the system does not update the original person assigned (with the one exception being if the sponsor changes from, or to, RRF). This ensures that the recompleted eGC1 returns to the same OSP staff person for follow-up, rather than disappearing from that person’s tasklist due to an automatic reassignment. If the changes warrant assigning the eGC1 to another OSP person, you can manually reassign it (see Reassign an Item). Note: Manual reassignments only change the person, not the group. The only time a group changes is in response to changed data on a withdrawn or returned eGC1, upon re-completion.

The following set of rules determine the eGC1’s initial assignment to the group/team and person.