Retirement and Benefits link directly to personnel setup in the (01) Salaries and Wages section of the budget.

This page presents the rate information for all of the periods for the chosen person.

This rate is not directly editable. To change it, you would need to open this person’s entry in the Salaries and Wages section.

The retirement and benefit rates are adjusted annually. See Payroll Load Rates for a list of rates for the various salaries and wages classifications.

The new PHS Assignment Request Form, introduced with the Forms-D changes, is now available in Grant Runner. This new form will be available to all applications in progress as well as new Grant Runner applications where applicable.

The default tuition inflation rate in SAGE Budget has been changed from 10% to 3%, to provide a more realistic figure and reduce the need for manual overwrites.

At the request of the Office of Research, the third and final reminder email sent to investigators that have not submitted an SFI disclosures for 365 days will no longer be sent. This final email cc’ed all related principal investigators which caused confusion/frustration.

Error with Attaching Budgets to an eGC1

An issue was resolved which was causing an error when users were attempting to connect SAGE Budgets to an eGC1 under a certain set of circumstances.

Investigator status reverting to Yes on Connect of Budget

An issue was resolved which was causing the investigator flag on the eGC1 personnel list to revert to YES when a user connected a SAGE Budget to an eGC1.

An issue is resolved which was occurring when a user changed the role type on personnel from one where Investigator status was automatically defaulted to YES (such as PI or Co-PI), to a role where they should be able to designate YES or NO (such as Mentor). The system was not displaying the YES/NO option in these cases until the screen was refreshed. It will now display the correct investigator options in real time.

An issue has been resolved so that costs in object code 38 (Unallocated) will now be itemized under Other Direct Costs in the SAGE Budget Excel export that matches the NIH Detailed Budget form format.

A new compliance question, AC-1-D, has been added to identify grants that will require a Significant Change at the time of submission. An answer is required if the Animal Use question AC-1 is answered “Yes”.

A few textual enhancements (for existing compliance questions) were made to allow OAW to process the grants more efficiently, and they include:

Effective July 1, 2016, UW’s equipment capitalization threshold will increase from $2,000 to $5,000. This change applies to all competing proposals submitted to sponsors on or after May 1, 2016. The following changes were made in Sage Budget to accommodate this threshold change:

Personnel with an Invalid NetID will not be selectable

With this change, all active staff in the Person Web Service will continue to show in the results on staff search, but those without NETIDs will not be selectable, and users will see a note indicating that the NETID must be established before the person can be selected.  Allowing personnel without NETIDs to be selected as personnel caused errors on the personnel list afterward.

Grants.Gov will be updating its systems to FORMS-D, for all applications submitted for due dates on or after May 25, 2016. The Grant Runner forms that will be updated to comply with FORMS-D requirements are identified below. There may be some application packages which include both a FORMS-C and a FORMS-D as options, and in this case users will be prompted in SAGE to select the appropriate one based on the due date. Per NIH, FORMS-C application packages will be set to expire after the May 7, 2016 AIDS due date.

Creation of a New PHS Inclusion Enrollment Form for Forms-D

For Grants.Gov FORMS-D, users will notice a new form called “PHS Inclusion Enrollment Report” in Grant Runner. This single form will replace the 2 separate forms in FORMS-C applications (Cumulative Inclusion and Planned Enrollment Report). With the Forms D changes, users will notice some additional fields to identify the type of reporting being done (“Delayed Onset Study?”, “Enrollment Type?”, “Existing Data Set or Resources?”) When “Delayed Onset Study” is marked YES, the remainder of the form will be disabled, per form rules.

In order to aid in the analytics of Grant Runner usage, the SAGE system will begin to retrieve and store the Activity Type code from Grants.Gov, as we are retrieving submission status information.

An issue that was causing users to receive an error when trying to discard advances has been fixed.

This section is for the Facilities and Administrative costs (also known as “indirect costs”) associated with this budget.

Amount subject to F&A costs (base)
Calculate and enter the amount of Direct Costs to which the F&A cost rates will be applied. This may be Modified Total Direct Costs (MTDC), Total Direct Costs, or zero (no F&A costs charged). Use the sponsor guidelines and GIM 13 to determine which method of calculation you should use. For Industry Sponsored Clinical Trials, apply the 25% indirect cost rate to the TOTAL direct costs. This includes items often listed in subcategories (for example: IRB review fees, IRB processing, pharmacy set-up, study start-up fees).

F&A cost rate
Enter the F&A cost rate that applies to your proposal (for example, 54.5%).  Enter Multiple in this field when:

Do not enter Multiple in cases where the F&A rate changes over the life of the project, but remains stable for the period in question.

Total F&A costs
Calculate and enter the F&A costs for the first budget period and the total for all budget periods.Hint: SAGE Budget calculates F&A costs automatically for you.

You can enter your budget figures on the eGC1 Budget page or connect a budget created in SAGE Budget. The advantages of building a budget in SAGE Budget and then connecting it to your eGC1 are that you can easily access current salary information and F&A rates, track different versions of your budget, and reduce duplicate data entry from SAGE Budget. See Connect Budget for more details.

If you choose to enter your budget information manually into the eGC1 Budget page, be sure to do the following:

END_OF_DOCUMENT_TOKEN_TO_BE_REPLACED

This feature is available for Modular, Detailed, and Subaward budgets on a Grant Runner eGC1.

Once you have entered one new period on your budget, the next time you click the Add New Budget Period button, you will have to option to copy the prior existing period. 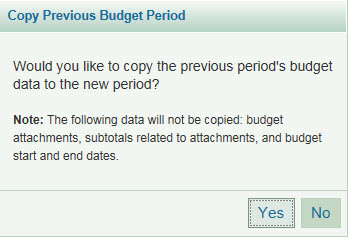 The reference in the dialog Note to “subtotals related to attachments” applies to just the Detailed and Subaward budgets.

The information on this page covers an application without a connected SAGE Budget.

In this section, you need to include all of the senior or key research personnel.

Select Add New Key Person to add a row to the section. Complete the following fields.

SAGE will calculate the value for the “Total Funds for Key Persons” field.

Section B: Other Personnel

This example shows an added row for a Data Analyst.

You can add up to 6 additional rows for other personnel types. Once you have added 6 rows, the Add New Other Personnel button will be disabled with the explanation “Maximum allowable by the Sponsor has been reached” displayed.

SAGE will calculate the values for the Total Number of Personnel and the Total Other Personnel Costs ($) fields.

This section of the budget form initially displays as a collapsed accordion section. 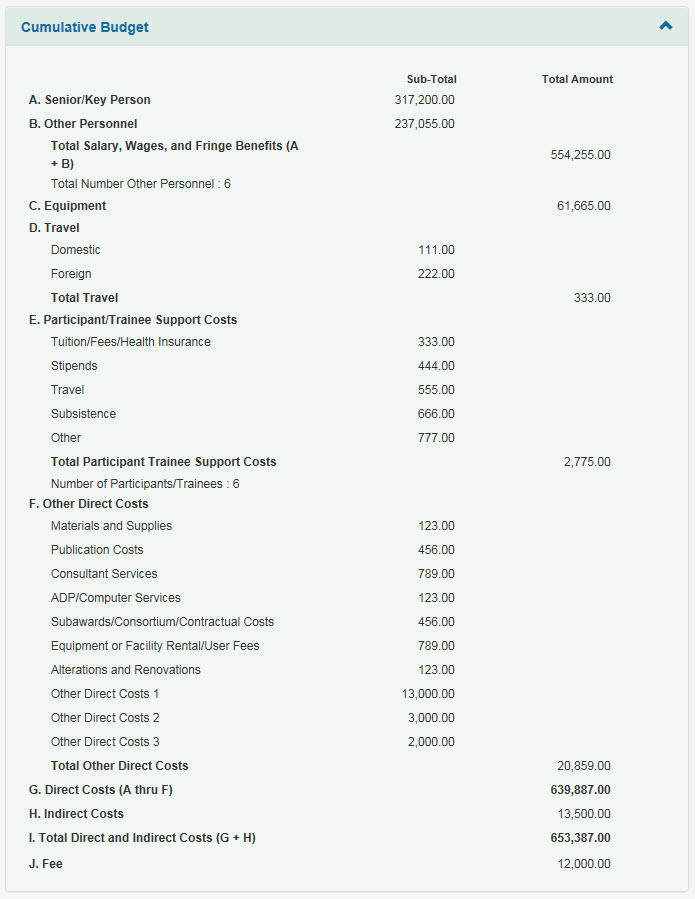 This is a required attachment. The link to add the attachment appears below the budget periods, and just before the Cumulative Budget section.

For information on file naming and uploading attachments, see the eGC1 and Grant Runner Attachments article.