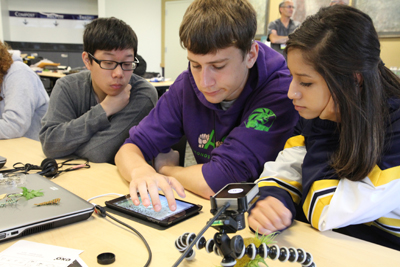 The Empowering Blind Students in Science and Engineering (EBSSE) workshop was held June 1-3, 2014 at a conference center near the UW. The workshop brought together three different groups of people to foster mentoring and networking among blind students studying science, technology, engineering, and mathematics (STEM). The first group consisted of eighteen blind students in STEM fields who came from seventeen universities and one high school in twelve different states. The second group consisted of sixteen blind mentors, some with PhDs, who are successful blind professionals working in STEM fields. The third group consisted of eight local leaders in industry, education, and government who attended for various lengths of time. The leaders participated in mentoring and listened to the successes and challenges of the blind students and mentors. A total of forty-four people, thirty-five of whom were blind, participated in the workshop.

The workshop consisted of structured plenary sessions, contemplative sessions directed by a professional in contemplative practices, and semi-structured breakout sessions based on academic and professional interests. One of the plenary sessions featured Dr. Nicholas Giudice, Associate Professor at the University of Maine, who presented his work on how blind people perceive various stimuli and his contributions to tactile graphics research. Sina Bahram, graduate student in computer science at North Carolina State, presented ways to grow one’s personal brand through the use of social media and the internet, important for networking and professional development. Dr. Daehee Lee gave a talk about his career as a Natural Language Processing Research Engineer for Nuance Communications, Inc. Shiri Azenkot, now an Assistant Professor at Cornell Tech in New York City, presented strategies for giving an effective presentation.

The breakout sessions in computer science were very popular among students learning about both accessible programming environments and about ways to generate accessible PDF files. An example of a contemplative activity was a “Just Like Me” session. This session allowed attendees to empathize with a partner silently to recognize everyone’s similarities in having positive and negative feelings, emotions, and experiences. This activity was particularly salient to educating the sighted leaders that blindness is not a defining characteristic.