The goal of this site

This site is designed to provide an overview of recent evidence on human factors evidence in programming language design. In some cases, our intent is to dispel myths. In others, it is to provide the result of research lines.

The community of scholars advocating for and participating in evidence-based programming language design is growing. This sheet is not comprehensive, but covers several of the broad trends and highlights a number of empirical studies that have been performed.

Computer science for all

In the United States, one broad trend is toward computer science education for all. As such, students in K-12 or beyond are learning to program. Despite this trend, the programming language community is highly fractured, with thousands of products used for a variety of purposes.

Teachers and students participating in CS for all may not have the training to evaluate the feature sets of various language products or their impact on people (e.g., students, professionals, those with disabilities). Modern computer science should significantly re-examine issues involved in the programming language wars.

Programming languages make up the foundation of software technology. As we push toward computer science for all, the design of our languages should be based increasingly on evidence.

The Language Wars are Insufficiently Studied

Experiments have shown a positive impact of statically typed languages 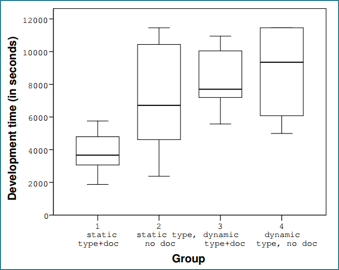 A number of experiments have been performed that show a positive impact of static type systems over dynamic type systems. This benefit was found in situations where developers had to use an API that was new to them. In two studies, the positive type system effect was compared with the documentation effect (also, the effect achieved by code completion). In both experiments, the positive impact of type systems was significant and much larger than the documentation or code completion effect. Static typing also showed a positive impact on debugging time for type errors comparing Java and Groovy (where Groovy was used as a dynamically typed Java). The results showed that the Java group was significantly faster fixing the type error [3, 4]. 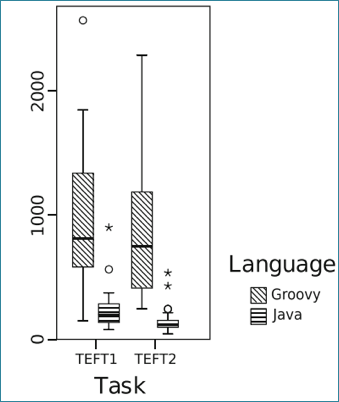 In a study by Pankratius and Adl-Tabatabai, student teams developed a desktop search engine with either locks or STM. The STM teams were among the first to have an operational implementation and spent less than half the time debugging segmentation faults, but had more problems tuning performance and implementing queries. Code inspections were suggestive that STM code was easier to understand than locks code, because the locks teams used many locks (up to thousands) to improve performance [5].

In a study of six programming languages using novices, one randomized controlled trial found that accuracy rates for certain C-style languages (Perl, Java) were not significantly higher than a language with randomly generated keywords and symbols, while languages that deviated from this style did (Quorum, Ruby, Python). Statistical procedures called Token Accuracy Mapping now exist that can predict which tokens contribute, positively or negatively, to the overall effect [6].

Inheritance depth is not a significant driver of software maintenance effort

Code maintenance effort is not strongly correlated with inheritance depth. Instead, factors such as the number of methods to change and the experience of the maintainer appear more related.  In one controlled experiment, Prechelt et al. studied the impacts on maintenance with five levels of inheritance depth compared to “flattened” versions of the same program with three and zero levels. The effort level was most highly correlated with the number of methods that needed to be understood for the change, followed by the maintainer’s experience and then inheritance depth, which made little difference. Reducing or eliminating this depth does not seem to have much effect on the effort required for understanding software [7].

When analyzing a curriculum, look at what earlier skills lead to success in the large and teach those in isolation before introducing more complex programming tasks.  While most first grade students cannot program "real" programs, students can still learn to think in ways that lead to strong computational thinking skills. They already do activities that have some relationship to computing - color-by-number pictures, following algorithms, classifying objects by type. The key is to identify how to frame those activities to make connections with computational thinking, as well as identify what bridge activities could come between existing activities and more mature activities [9].