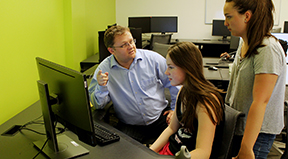 Save the date for a webinar to learn more about Quorum Studio, Tuesday, January 14 at 2pm Pacific/5pm Eastern. Please share this announcement with others who may be interested.
The Quorum Programming Language is the first evidenced-oriented programming language that was “born accessible” more than ten years ago. To be evidence-oriented, the syntactic and semantic features of the language are tested using randomized controlled trials with users at various experience levels (e.g., novice, experienced) in different contexts (e.g., games, network programming, and data science). To be born accessible, the language is simple and elegant with no arcane symbols such as curly and square braces, semi-colons, or syntactically meaningful spaces making the language more understandable and welcoming to young people, including those who use screen readers. Further, Quorum connects to accessibility hardware and software, allowing interfaces, graphics, and even animations to be accessible even to blind users who use screen readers.
New is Quorum Studio, an accessible integrated development environment (IDE) to support programmers in Quorum. Quorum Studio is built on the same design principles as the language itself, making it accessible to users, including blind users who employ screen readers. In the first version, we have created a full development environment for editing, navigating, compiling, debugging, and executing applications, in addition to typical help features (e.g., highlighting, code completion, projects, updates) and accessibility features (e.g., smart zoom, smart navigation, a highly customized screen reading experience). Quorum Studio is also a platform for future accessible growth, with 3D visual level editing, still fully accessible even if the user is blind, coming in the summer of 2020 in Quorum Studio 2.
The development of Quorum Studio 1.0 was partially funded by the National Science Foundation under grant number #CNS-1738252 and #CNS-1738259 and will be available at no cost on the Quorum download page.