Which e-mail alerts are automatically generated and to whom are they sent?

Also review the following sections in the Communications chapter:

SPAERC automatically generates documents which SPAERC users may customize and send. These documents are covered in Communications: Auto Generated Documents and Ready for Pickup.

When is the Office of Animal Welfare added to the approval graph of an eGC1?

The application would be one that involves the use of vertebrate animals (non-fiscal compliance question AU-1 = Yes). The Animal Subjects node appears as an approver if the application is After-the-Fact (ATF).  If not ATF, then if the Application Type is Transfer from Another Institution or Supplement and Extension.

Otherwise, the node is added “just-in-time” when the sponsor notifies the PI that the proposal has received a fundable score. The PI or other application owner adds Animal Subjects to the Approval Graph as an ad hoc Watcher. This sends an email notification to the Animal Subjects reviewers and gives them access to the application.

The system adds reviewers to the Approval Flow based on a combination of the selected or primary position units specified in the eGC1 and the individual routing rules of those units.

Note: The eGC1 preparer or any reviewer can add an additional node (called an ad hoc reviewer) for an individual or role (for example, Dean’s Reviewer) to the approval flow once the eGC1 is routing.

The History & Comments page provides an overview of all actions related to approvals, from when the application is first completed to when it is approved by OSP, including withdrawals, returns and re-completions. For Grant Runner and Adobe package applications, submission status information is also displayed here.

This page also displays any comments previously entered by campus reviewers or OSP when processing the application. Comments are:

*OSP’s business rule is to always give reviewer comments even when the system does not require them.

The system adds a standard comment when the preparer created the current eGC1 by copying another.

The following image shows an example of this page. 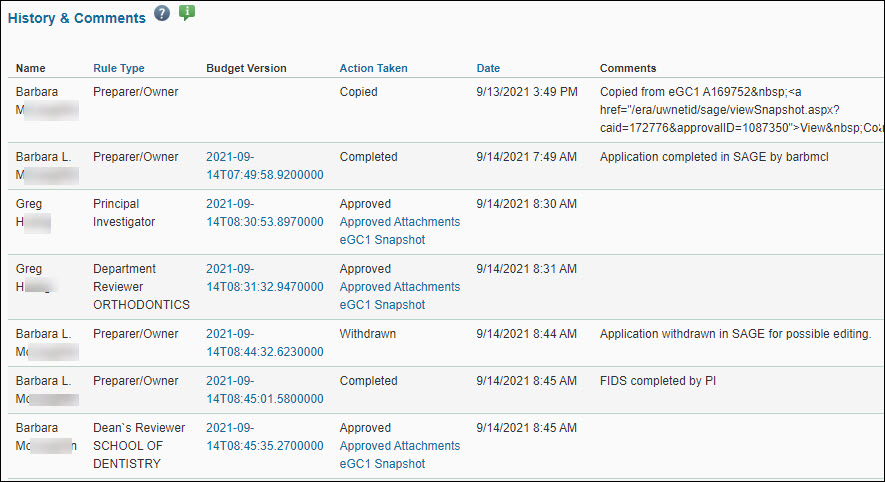 For Grant Runner applications, there is also a link to Approved Sponsor Forms.

Upcoming Approvals lists the units or reviewers who have not yet approved (or watched), their approval status, and a link to view the list of authorized reviewers for that unit.