Carving out a brave space: Courage in art

UW Drama Professor and Head of Directing & Playwriting Valerie Curtis-Newton presented the 45th annual University Faculty Lecture on May 3, 2022. View the recording below.

Watch a recording of the lecture below and read more about her work. 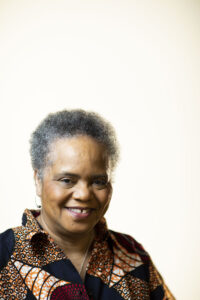 “Have something to say. Be brave enough to say it. Use your art to change the world.” UW Drama Professor and Head of Directing & Playwriting Valerie Curtis-Newton lives by these words in her directing and teaching career. She urges artists to take risks and inspires audiences to see the world differently and embrace difficult conversations. Her lecture will explore the importance of courage in art and reflect on how her work has shaped theater in Seattle and beyond.

Curtis-Newton, ’96, is head of directing and playwriting for the UW School of Drama and artistic director of the Hansberry Project, a professional Black theater company. She has directed performances across the country at Seattle Repertory Theatre, L.A.’s Mark Taper Forum, the Guthrie Theater in Minneapolis, Actors Theatre of Louisville, Alabama Shakespeare Festival and New York Theatre Workshop.

For her work and her leadership, Curtis-Newton has received numerous awards from the National Endowment for the Arts, the Stage Directors and Choreographers Foundation and Theatre Puget Sound. In 2020, the Seattle Times named her one of the most influential citizens of the last decade.

About the University Faculty Lecture

Since 1976, this annual award has honored current or emeritus faculty whose research, scholarship or art has been widely recognized by their peers and whose achievements have had a substantial impact on their profession, the research or performance of others, and society as a whole.