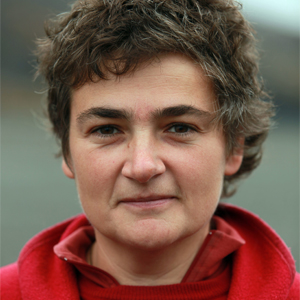 Collapsing ice shelves and increased calving of large icebergs in Greenland and Antarctica are symptoms of rapidly changing ice sheets and rising seas. The rapidity of these changes has come as a surprise, revealing our limited understanding of how ice sheets respond to a warming climate. One major obstacle to understand these changes, and project future ones, is the lack of measurements from the Achilles’ heel of glaciers: the marine edge. A second, related one is the need to account for the complexity of interactions between the glaciers and the ocean in models used for projections. In this lecture, I show how both can be overcome through a collaborative, team science effort which spans across the natural sciences and engineering and includes local, indigenous knowledge. This team science has allowed us to probe the edge of massive calving glaciers in iceberg-choked fjords in Greenland using instruments deployed from helicopters, icebreakers, fishing vessels, snow mobiles and autonomous vehicles. We have documented the intrusions of warm, Gulf Stream water into the fjords and found that the ensuing melting of the glaciers is enhanced by muddy plumes of surface melt, released thousands of feet below the sea surface. These limited measurements, complemented by theoretical, laboratory and numerical modeling, have then been used to improve the climate models used for sea level rise predictions in a large, international collaborative effort. The lecture will focus on this journey – from the edge of glaciers to global predictive models.

Due to COVID-19, there will be no wait list or walk up admission the night of the event.

This lecture will be recorded and made available 24 hours after the lecture date. Recordings will be available on our YouTube page for two weeks following the event.

Fiamma Straneo is a Professor in Polar Climate and Oceans and the co-Director of the Polar Center at the Scripps Institution of Oceanography of the University of California San Diego. Prior to joining Scripps in 2017, she was a Senior Scientist at the Woods Hole Oceanographic Institution. Her research focus is the high latitude North Atlantic and Arctic Oceans and their interaction with the atmosphere, sea-ice and the Greenland Ice Sheet.

Straneo has led 18 field expeditions to the Arctic and Greenland and collaborates extensively with climate and paleoclimate scientists, glaciologists and ice sheet modelers. She has recently chaired the Ocean Forcing Working Group for the Ice Sheet Modeling Intercomparison Project for the Sixth Assessment Report of the Intergovernmental Panel for Climate Change and is contributing author for the same report. Straneo is also co-chair of the Climate and Cryosphere Program (CliC) of the World Climate Research Program (WCRP) and a co-chair and founder of the Greenland Ice Sheet/Ocean Science Network (GRISO). She was a 2013 fellow of the Leopold Leadership Program from Stanford’s Woods Institute for the environment, was awarded the Sverdrup Award by the Ocean Sciences Section of the American Geophysical Union in 2016, and was invited to give the Keeling Lecture in 2018. Straneo obtained her Ph.D. in Physical Oceanography in 1999 from the University of Washington, USA, following a Laurea cum Laude in Physics in 1993 from the University of Milan, Italy.