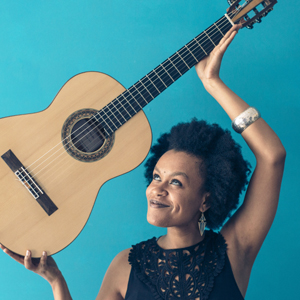 In this talk, Meklit Hadero explores how music knits people and communities together, whether or not social distance divides us. Moving between personal history, behavioral psychology/neuroscience research, and post-COVID landscapes, Hadero brings together creativity, wellness, and the power of collective community narratives.

Meklit Hadero is an Ethio-American vocalist, songwriter, composer and cultural activist, making music that sways between cultures and continents. Known for her electric stage presence and innovative take on Ethio-Jazz, Hadero is Chief of Program at Yerba Buena Center for the Arts in SF, as well as a National Geographic Explorer, a TED Senior Fellow and a Mellon Creative Fellow at the University of Washington. Hadero has received musical commissions from Lincoln Center, the Creative Work Fund, the MAP Fund and the Center for Cultural Innovation. She is a featured singer in the UN Women theme song, as well as co-founder of the Nile Project, and a former Artist-in-Residence at Harvard, NYU and Purdue. Her last album When the People Move, the Music Moves Too reached #4 on the iTunes world charts, and her music has been featured in the New York Times, NPR, CNN, the BBC and many more. She holds a BA in Political Science from Yale University.