The Update Periods page displays personnel values for a selected individual, for all budget periods.

The selected individual’s name and title display above the values.

Each section can be collapsed or expanded as desired.

The following image shows the Base Salary section of the Update Periods modal, for just one period as an example. 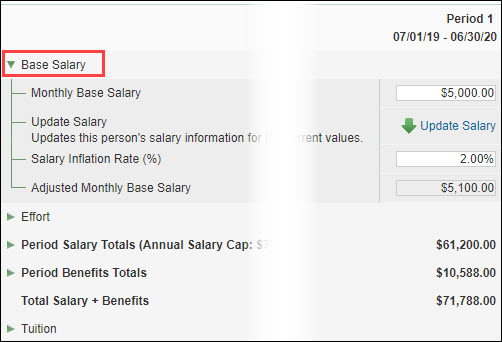 For personnel that are paid hourly, the Starting Monthly Salary value, on the Line Setup modal, will be equal to the hourly rate of pay times the number of hours in a standard month (173.3 hours).

The Salary Inflation Rate is the value specified in the Inflation & Benefit Rates section of the Properties tab page.

The following image shows the Effort section of the Update Periods modal. 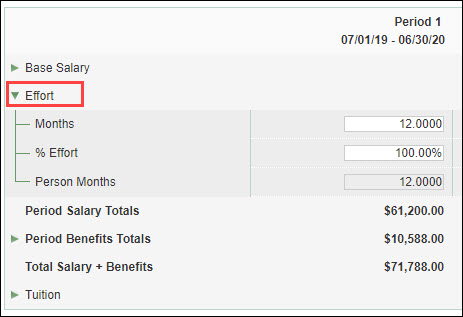 Months is auto-calculated based on two data values:

A budget period that includes a leap year will not affect the Months calculation.

% Effort is auto-calculated based on the initial % Effort entered on the Line Setup page.

Person Months is automatically calculated and is equal to: Months times Effort.

If the budget has a Salary Cap enabled, this will be expandable section. It will also display the individual’s salary without the cap imposed.

The following image shows the Period Benefits Totals section. The values are described below. 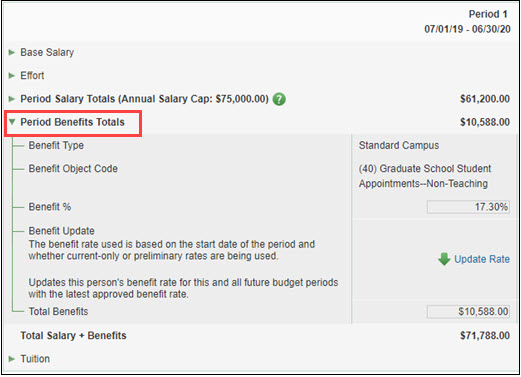 This read-only section is pre-populated based on data entered on the Line Setup page for this person (specific individual or a TBD one).

The Total Salary + Benefits row shows the total for each period and in the far right Summary column, the total for the project. The values are the sum of the Period Salary Totals and the Period Benefits Totals.

The following image show the Tuition section of the Update Periods modal with some example values. Each field is described below.

The setup page for personnel, including To Be Determined (TBD) persons, consists of four sections:

This section contains the values for the person added, as described in the following table. This following image shows the fields with example data for a budget that includes APL benefits.

This section indicates whether the person’s position is Calendar or Academic, their role in the project, and the amount of effort.

This section displays information about the person’s earnings.

Note: Salaries are adjusted to reflect any salary cap on the Targets & Caps Tab. Personnel with a capped salary are indicated.

The earnings table lists all of the earnings for the selected person.

The Starting Monthly Salary field will reflect the total of the selected (checked) earning rows.

This section displays any user-entered notes for this personnel entry.

How do I ensure the right salary and benefit rates are applied when a person changes positions during a project?

If a person will hold two different positions over the life of the project, you need to add the person twice to your budget.  Select the appropriate UW Sub-Object Code for each position. Be sure to adjust the % effort appropriately for each period. The correct benefit rate will automatically be applied according to each position’s Sub-Object Code.

You can set a salary cap in SAGE Budget. Review the Budget Settings user guide article.

Will SAGE Budget automatically add the clinical salary of personnel to my budget?

Yes. When you add a clinician to the Salaries and Benefit Costs section of your budget, both the UW Monthly Salary and Clinical Monthly Salary are included in the Monthly Base Salary.

The following two scenarios explain how to adjust for personnel promotions between and during a budget period, so that the budget properly reflects the appropriate UW Sub Object Codes for position and benefits.

Add a Salary Increase for a Promotion between Periods

When you add a person to a project, their appointment (or sub object code) is specified for the length of that project and cannot be changed.

So what do you do for a researcher who will get a promotion and a raise at the end of the first period, for example? Our researcher is currently a Senior Fellow for the first period and then an Assistant Professor for the second and subsequent periods.

Add a Salary and Benefits line item for the researcher in the first period with the current appointment, and with the appropriate amount of effort. For the second, and all future periods, change the salary to $0 and the effort or person months to 0%.

Add a second Salary and Benefits line item for the same researcher with the future appointment. Enter the salary as $0 for the first period and the new salary amount for the second period. The new salary will automatically cascade to the future periods.

Schematically, the salary changes look like this, with example salary figures.

SAGE displays the worksheet with the researcher’s salaries for the first and second periods of the project.

Add a Salary Increase for a Promotion during a Period

This time the researcher’s promotion from Senior Fellow to Assistant Professor will occur in the middle of the first period.

Add a Salary and Benefits line item for the researcher in the first period with the current appointment. Let’s assume that the promotion will take effect half-way during the period.

In SAGE Budget, we revised how calculations are made for salary distributions.

We updated our tools’ styles.

To ensure that our tools have a more consistent look and are easier to maintain, we made some changes in our code. In some newer browsers, you may notice slightly different colors, rounded corners, and other minor changes. The changes were made in the following tools:

The Sea Pay line item appears if the Budget includes Sea Pay checkbox is selected on the Properties Tab. Use it to include additional work hours above a standard 40 hour work week when personnel are at sea.

The Sea Pay Calculation accommodates up to an additional 44 hours per week for personnel at sea.