The Grants.Gov RR Subaward Budget Form will be made available in Grant Runner. This form is structured the same as the RR Detailed Project Budget form, so users will share a familiar experience between the two forms. Key Features:

Users will be able to generate a printable version of the Detailed Project and Subaward Budgets, excluding attachment content.

Three existing Grant Runner forms have been updated to allow users to edit details without being taken to a separate pop-up. Instead of a pop-up to add new persons/sites/periods, users will simply “expand” the accordion, to view and edit details.

This change provides users with a more streamlined entry experience and is consistent with the new detailed project and subaward budget entry. In addition, with this change, users will no longer be required to complete all required fields before saving. They can complete them as the information becomes available.

This update has been applied to:

New SAGE help documents will be made available for the RR Detailed Project Budget and Subaward Budget Forms to assist users in their transition and troubleshooting on the new forms.

The Grant Runner SF 424 total federal funds field will be updated to be auto-calculated based on the modular or detailed budget total costs information. This assures that the total funds being requested remains in synch as figures on the budget forms are changed. For opportunities that do not require a budget and are supported by Grant Runner, this field will be editable so that users can customize the entry needed.

Users can take advantage of a “Copy Previous Period” feature in cases where the cost entries across the periods are the same or similar, and copying them would save time and effort. This feature is applied to the following Grant Runner forms:

On each of these forms, when a user clicks the “ADD NEW PERIOD” button, they will be prompted on whether they would like to copy the previous period budget figures or not. When the user clicks YES to copy, all data will be copied, with the exception of budget attachments (e.g. additional key persons attachment on detailed budget), totals associated with those attachments, and period start and end dates. 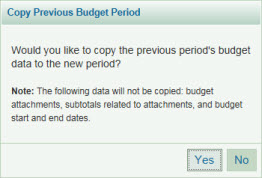 The initial Grant Runner wizard that users experience when first creating an eGC1 will be revised to allow for incorporation of the new detailed budget forms and to introduce further streamlining.

Some Grant Runner submissions were failing due to extra spaces appearing in non-required fields. The extra spaces were considered invalid content by Grants.Gov. The SAGE system will now trim away any trailing or leading spaces, to prevent this from occurring. There may still be incidents of other non-acceptable characters that cause submission problems. We are attempting to catch as many of these as we can, and continue to encourage users to limit the copy and paste done from other applications into Grant Runner forms as much as possible, to minimize the likelihood of this occurring.