A new age of fires

As wildfires grow in severity, UW researchers are helping our region create a path forward — for the health of our forests and all who live here.

The UW’s broad research on the impacts of wildfires is supported by donors to the Be Boundless — For Washington, For the World campaign.

This summer, as fires and dense smoke overwhelmed communities up and down the West Coast, it was difficult to ignore a new age of environmental change. But our modern relationship with fires has roots in practices and policies forged more than a century ago.

In 1910, a series of fires raged across eastern Washington, northern Idaho and western Montana, burning 3 million acres of forest in just two days. In the decades that followed, the U.S. Forest Service embraced a policy of preventing and suppressing fires. By the 1970s, the Forest Service began letting some fires burn, following research showing that fire was part of a healthy ecological process — but the vast majority continue to be extinguished when possible.

Today humans face a growing list of complexities in our relationship with forests. Sprawling exurbs border national forests, and human-caused climate change has led to larger and more powerful blazes. Even in western Washington, fire season may soon be an annual occurrence.

UW researchers are working throughout our region to learn more about our forests — their health and how they can be better managed — and helping inform communities and policymakers. They’re also studying the high levels of air pollution caused by seasonal fires, and examining its impact on human health. Though the hurdles ahead are daunting, UW faculty and students are working to find a healthy, sustainable way forward that is grounded in data and research.

In the summer of 2019, UW photographer Mark Stone joined researchers throughout the Northwest as they studied the many ways wildfires impact our lives. Read on to see and learn about the breadth of work the University is doing in this important area. 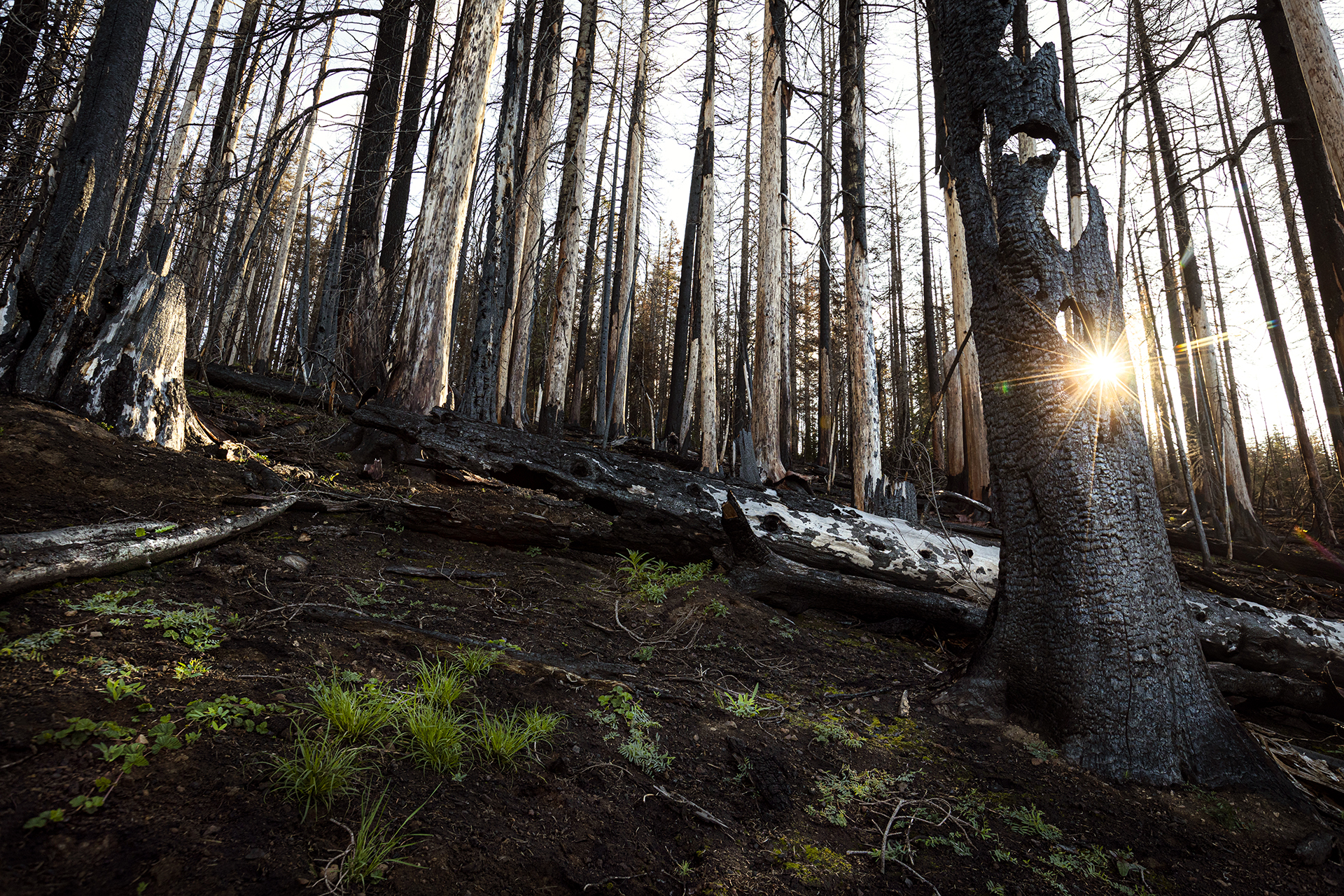 Less than 1% of Washington's wildfires over the past 40 years have burned west of the Cascade Crest. The 2017 Norse Peak fire was one of them, consuming 25,000 acres near Mount Rainier National Park. 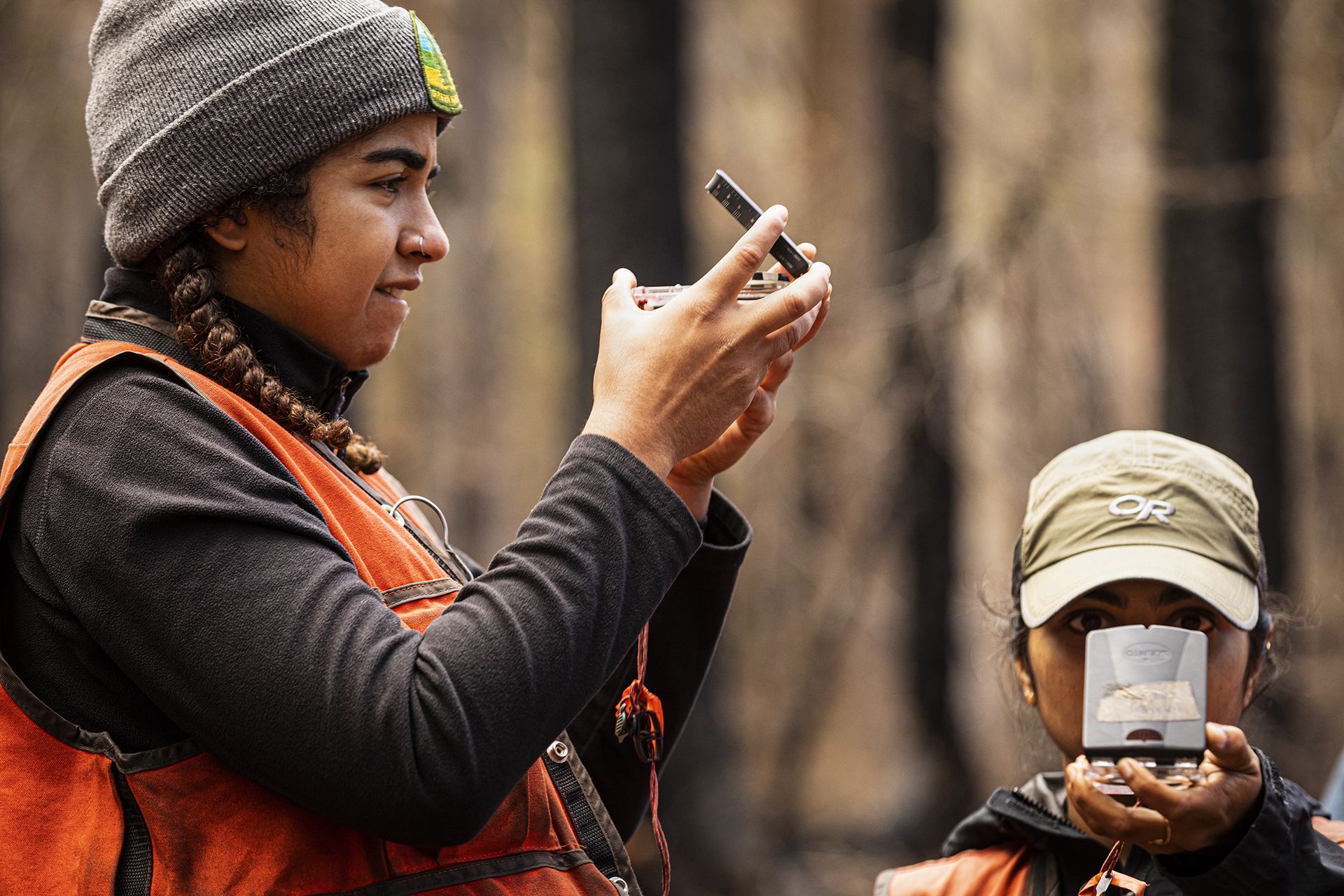 At the site of the Norse Peak fire, field technicians Hannah Wilson, ’19, and Hiruni Jayasekera, ’19, collect data for the lab of Brian Harvey, assistant professor of environmental and forest sciences. Harvey and his team are building on evidence suggesting that western Washington has a history of large wildfires. Donor support powers research, education and outreach activities in the Harvey Lab. 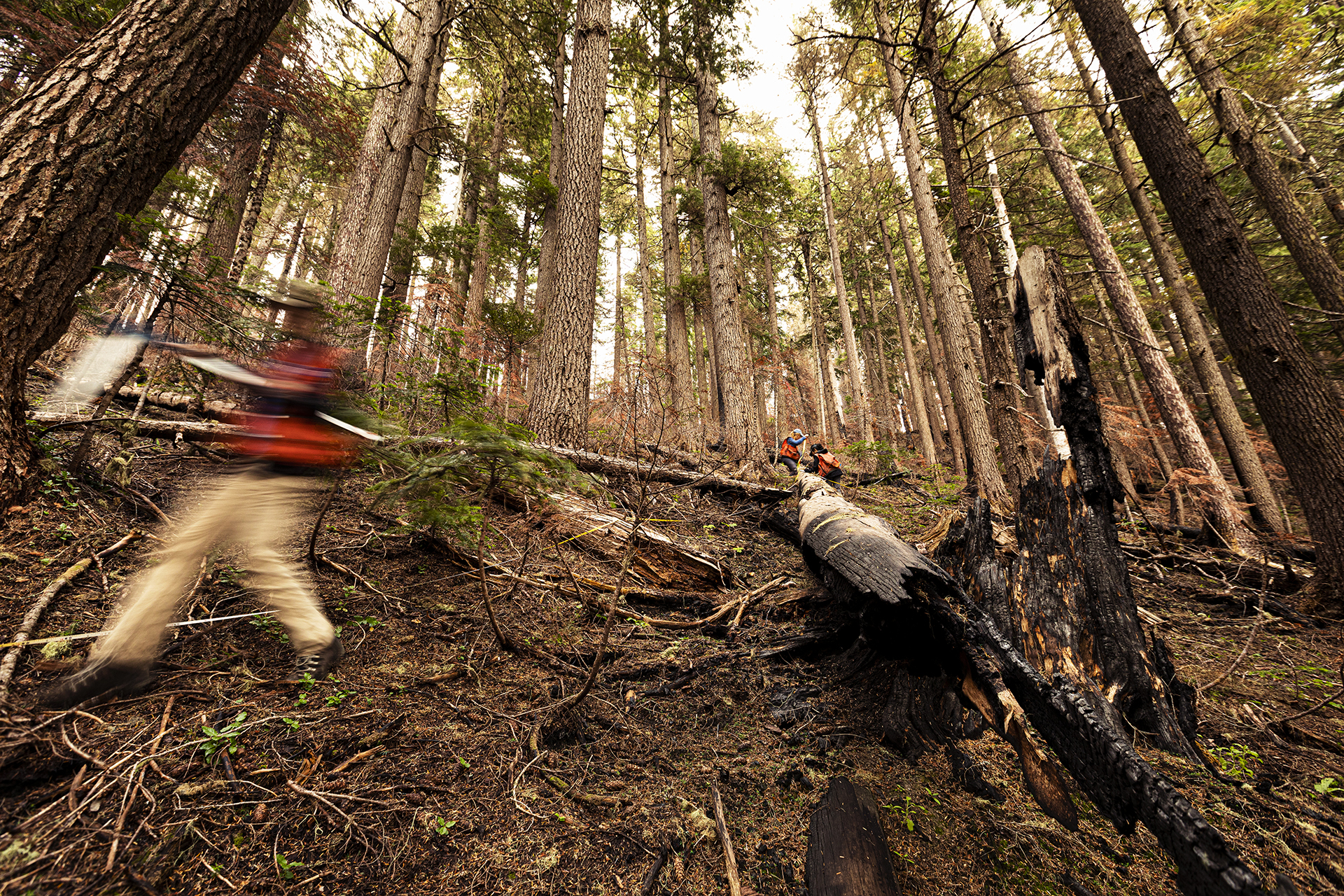 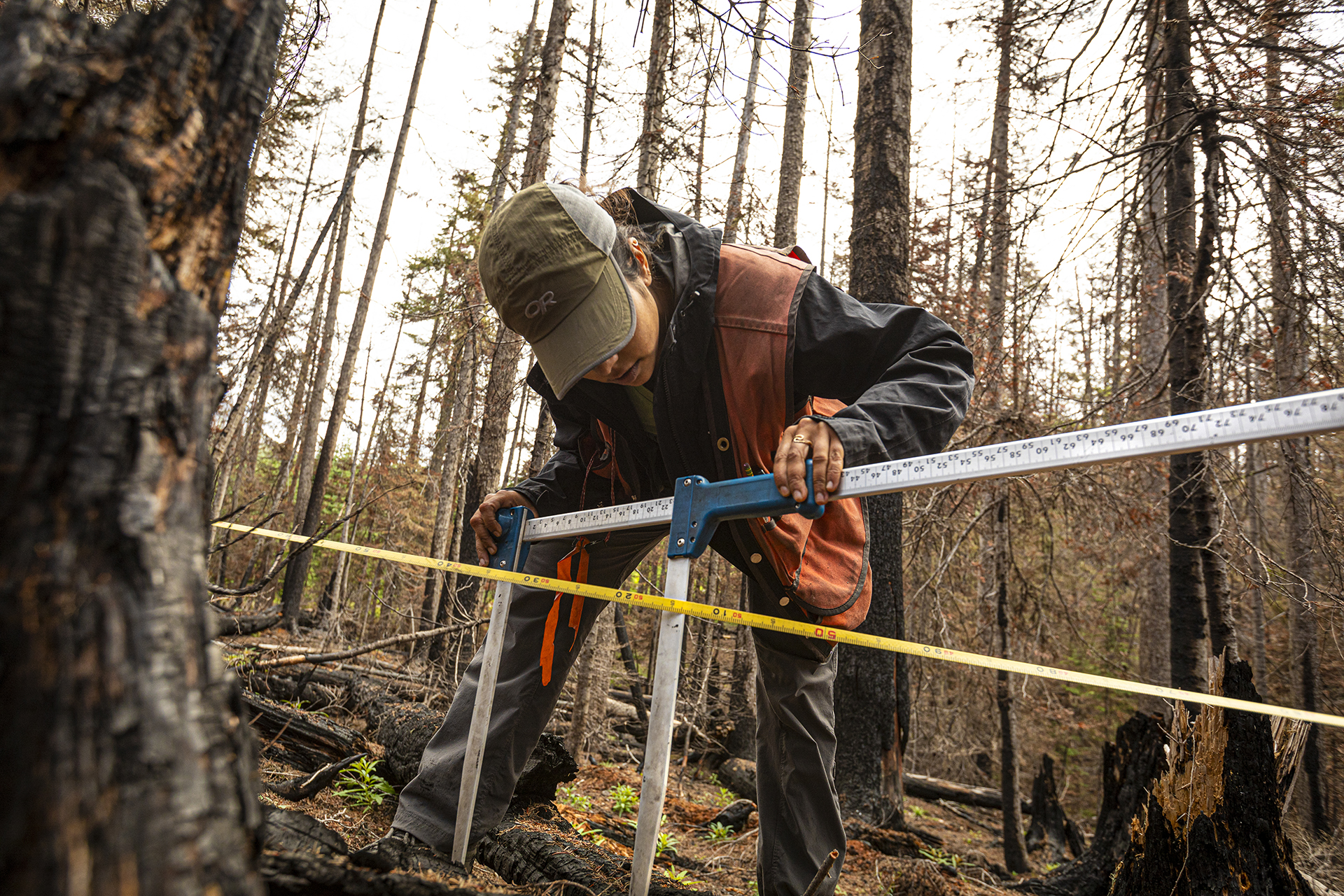 Jayasekera, whose hands-on research was supported by several donor-funded scholarships, measures a downed log as part of a survey of the forest’s recovery after the Norse Peak fire. Harvey and his collaborators are testing how fire affects the area’s biodiversity. With more light and space available after fire, plant diversity and forest regeneration can increase — a reminder of the resilience of the landscape and all that lives there. Harvey is also testing how a warming climate may affect this resilience. 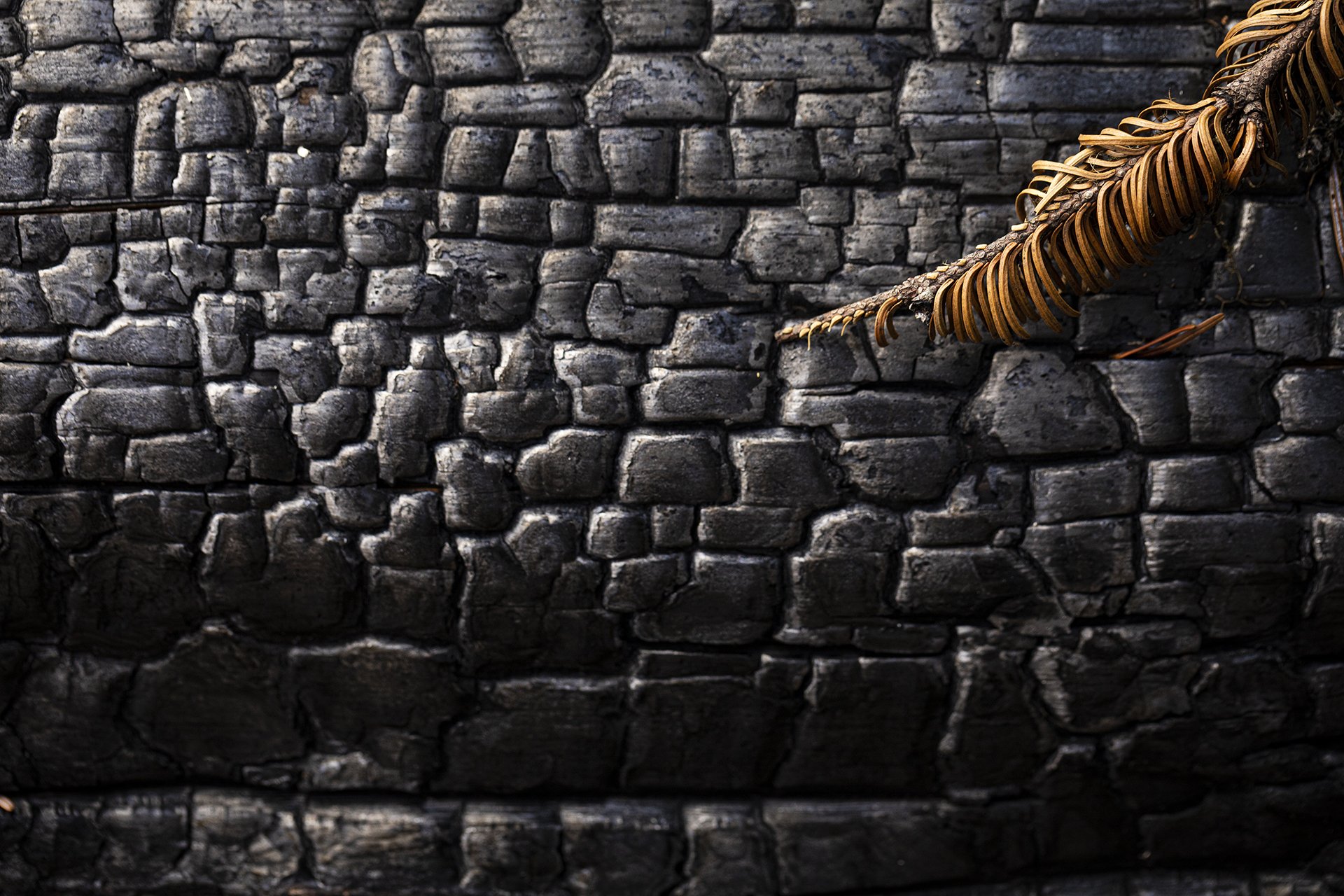 Warm, dry weather, winds from the east, and an ignition source are the driving factors in most western Washington fires. As climate change accelerates, these conditions may become more prevalent. 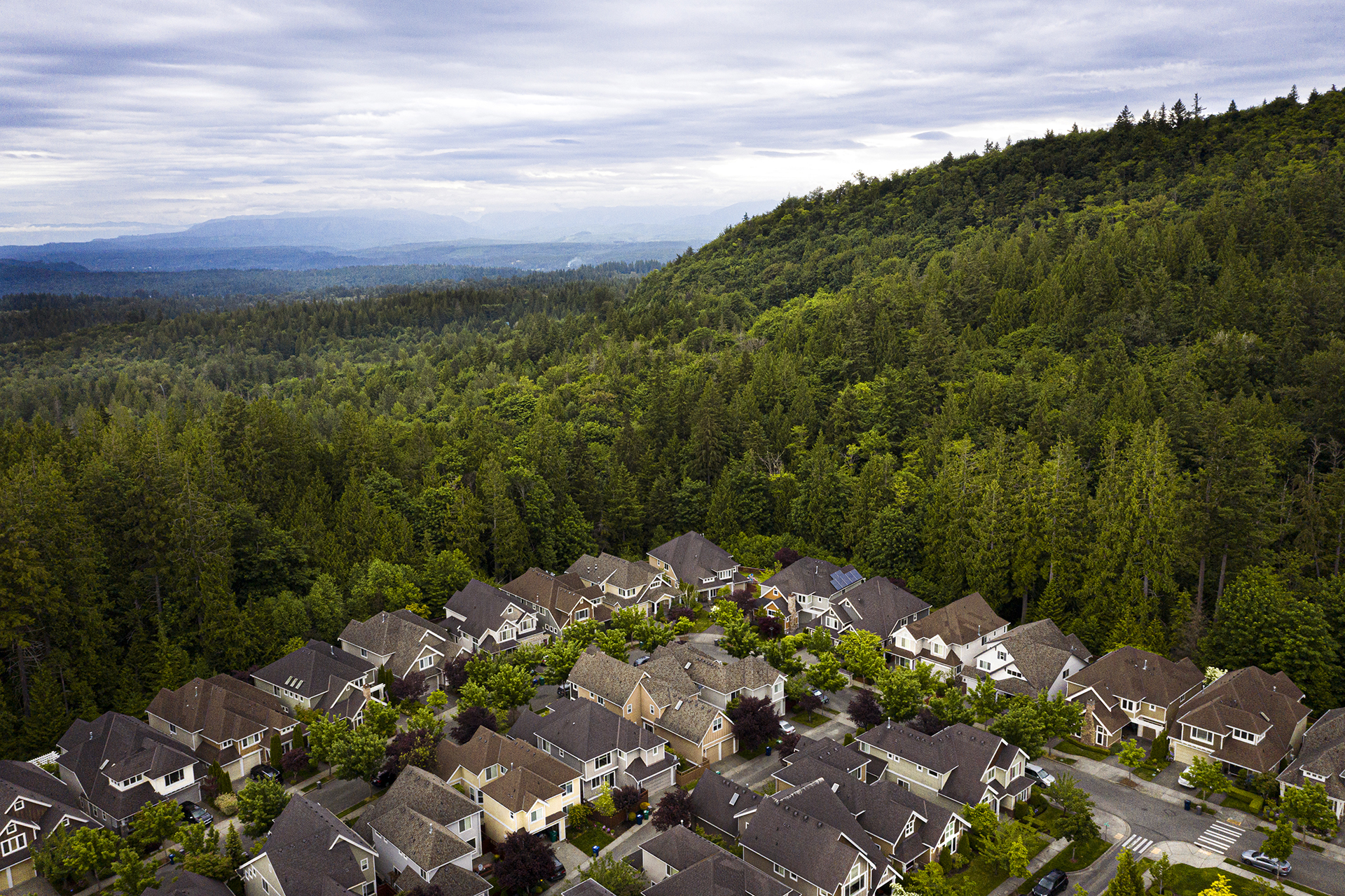 Learning more about the history of and the conditions for west-side fires is crucial. “Being able to understand these systems is really critical to our ability to manage them as a society and make smart decisions about how we’re going to manage forests,” says Harvey. “That’s particularly important as the human footprint continues to expand.” 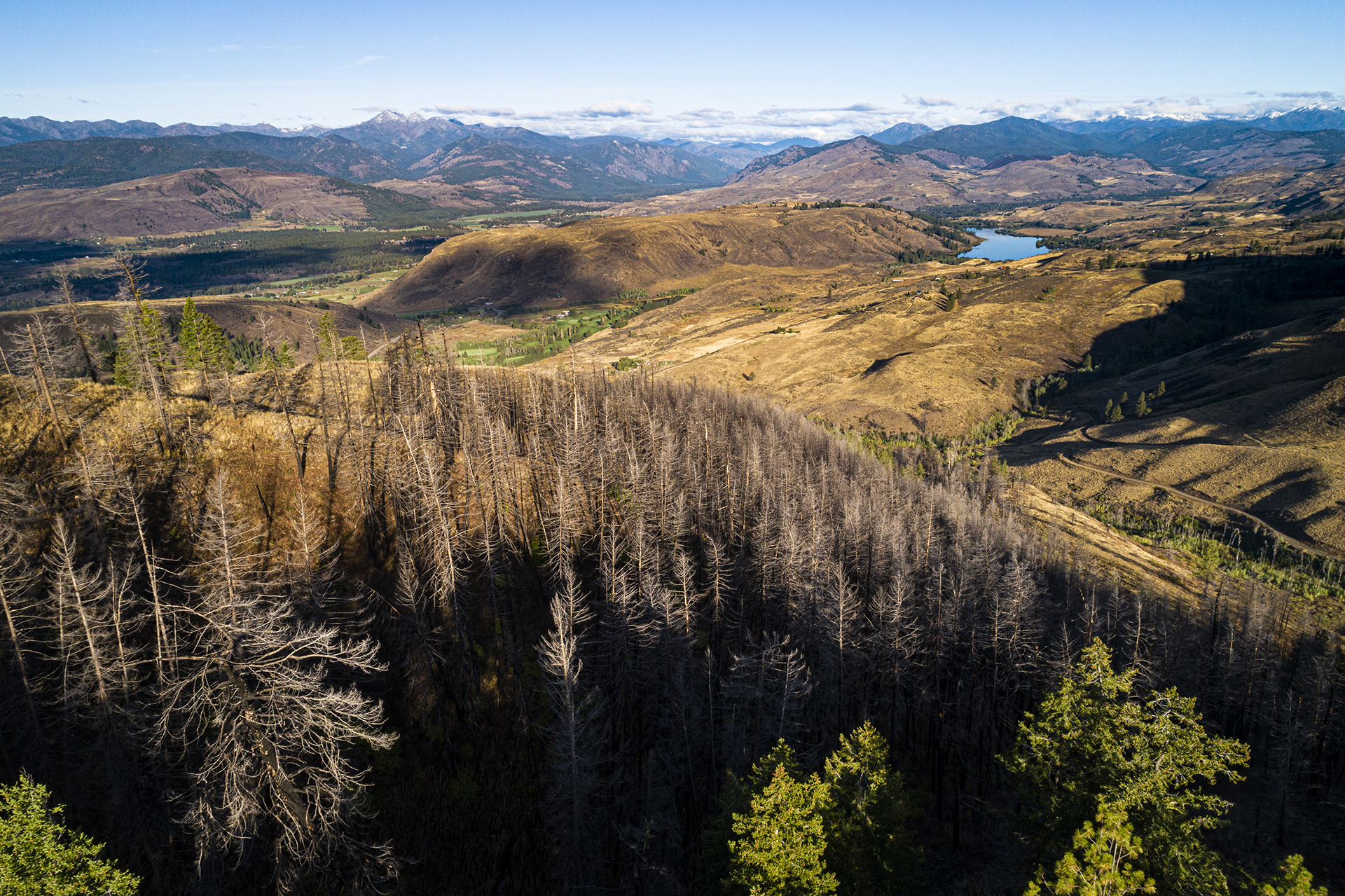 Many in central and eastern Washington live with the annual threat of wildfires. Susan Prichard, a UW fire ecologist who lives and works in the Methow Valley, advises community stakeholders on how to prepare for fires. 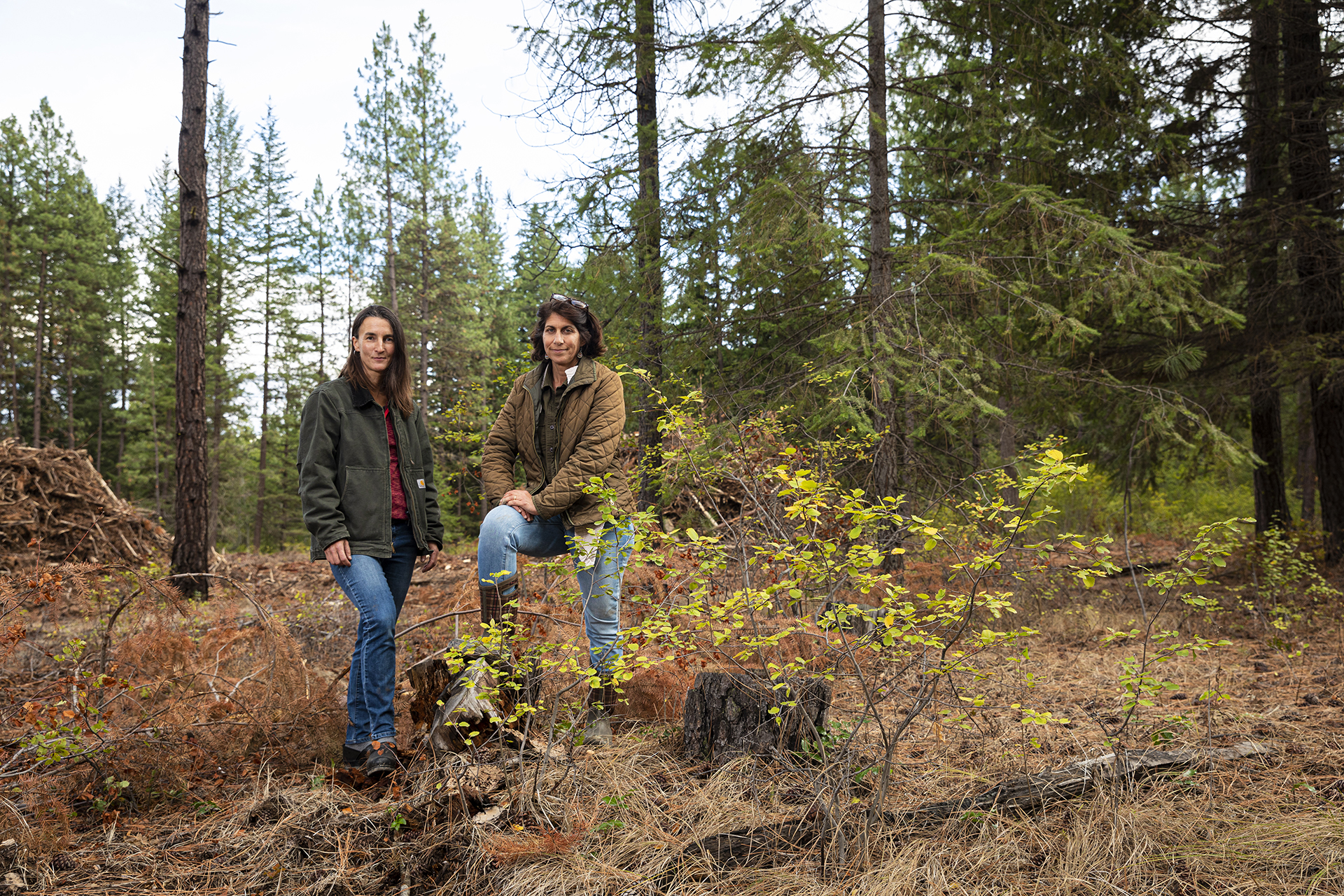 Prichard (left) — pictured here with Jasmine Minbashian, executive director of Methow Valley Citizens Council, a conservationist group — describes her approach to working with fire: “It’s not a matter of if, it’s when. So can we bring in some fire now to prevent the destructive fire later?” (Watch a video profile of Prichard at work.)

Prichard and her colleagues have evidence that dry-forest restoration, including thinning and burning, can make forests more resilient to fire. Trees can better survive a fire in forests that have been treated. Shown here: A portion of a forest that has not been thinned and burned, and one that has. 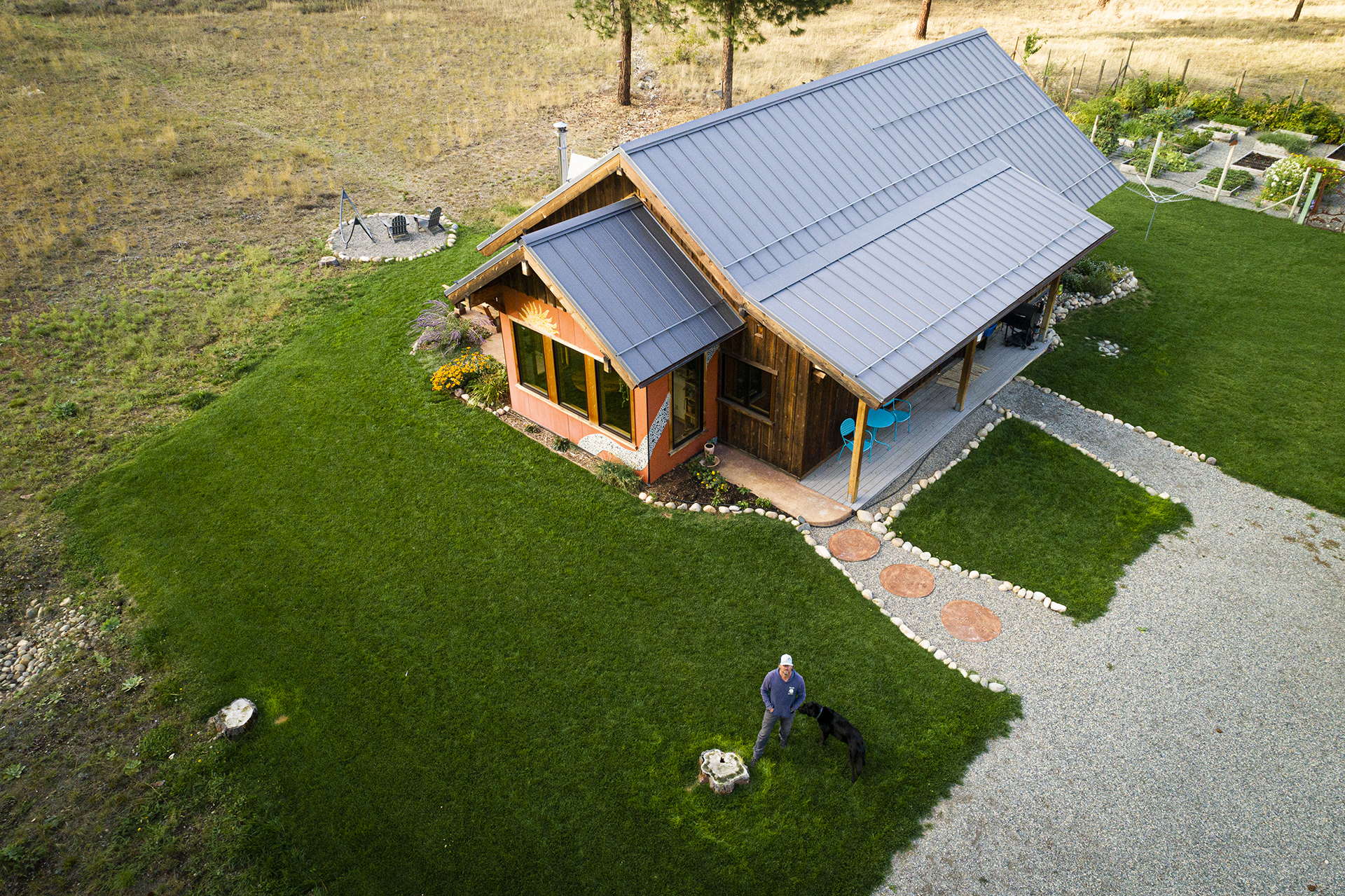 Methow Valley resident Derek Van Marter’s home was burned in the Rising Eagle Road Fire in 2014. His new home, shown here, is adapted for fire, with an irrigated lawn, tall shrubs cut back and nearby trees “limbed up” — trimmed so that only the tree’s canopy thrives, reducing fire fuels and protecting property.

Up in the air 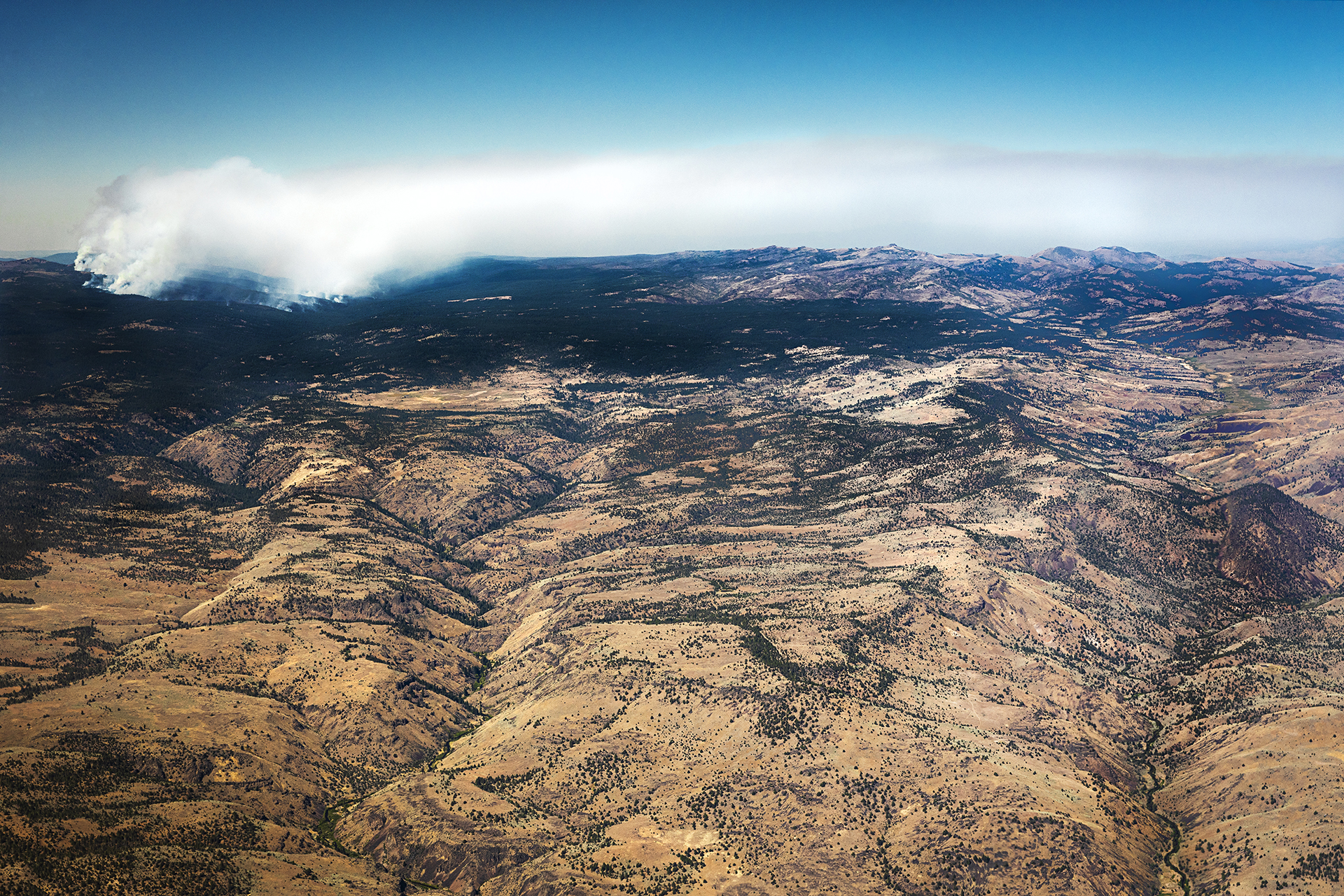 Wildfires not only have an impact on the forests they burn; they also disrupt air quality, sometimes halfway across the world. Whether the smoke is from Siberia or Salem, Oregon, UW researchers are studying how it travels and how it affects air quality in both the short and long term. 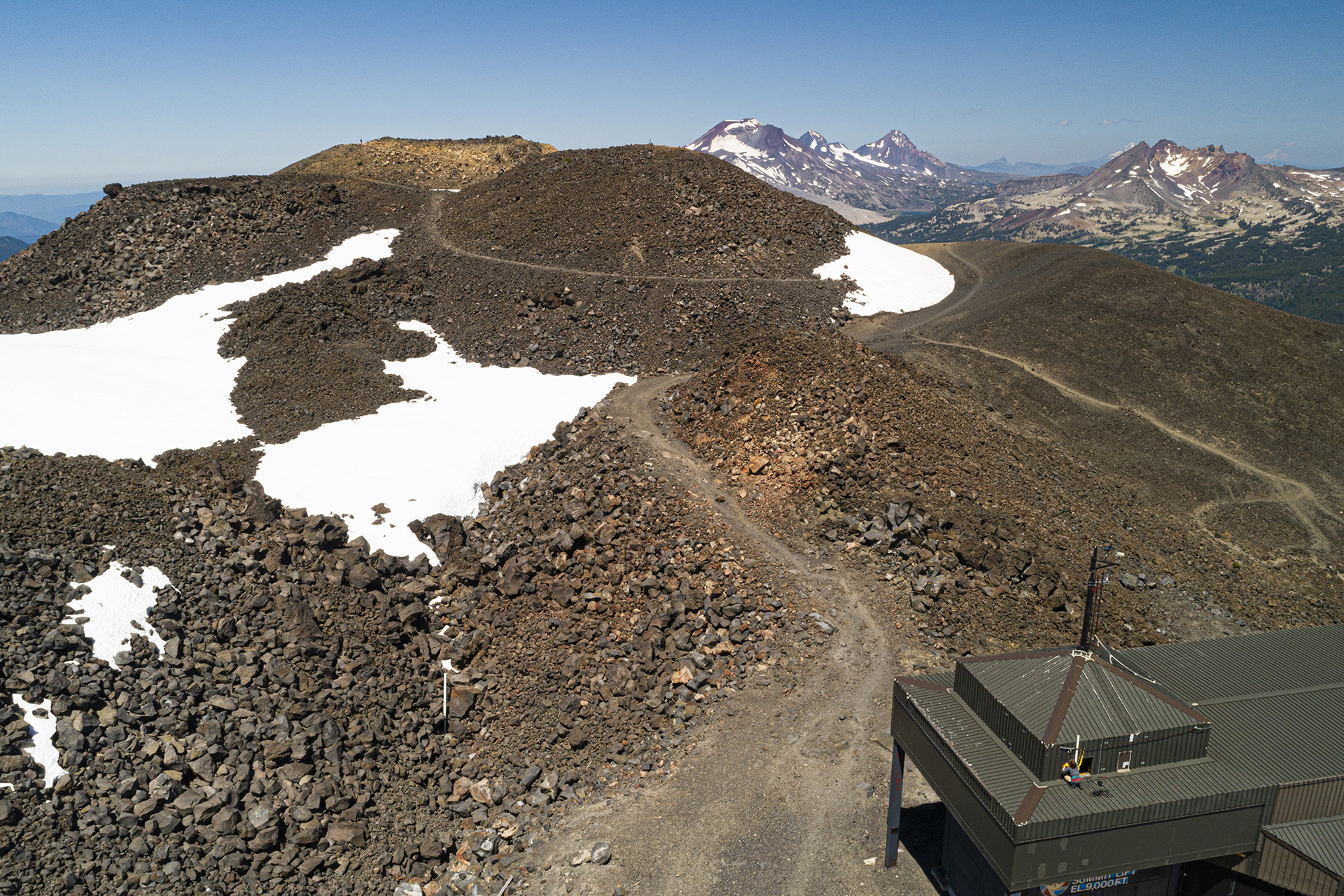 Dan Jaffe, UW Bothell professor of environmental chemistry and expert on the transport of air pollutants, has continuously conducted air-quality research on the 9,000-foot summit of Mount Bachelor since 2004. As organic compounds from fires linger in the air, they can interact with other compounds and continue to degrade air quality. 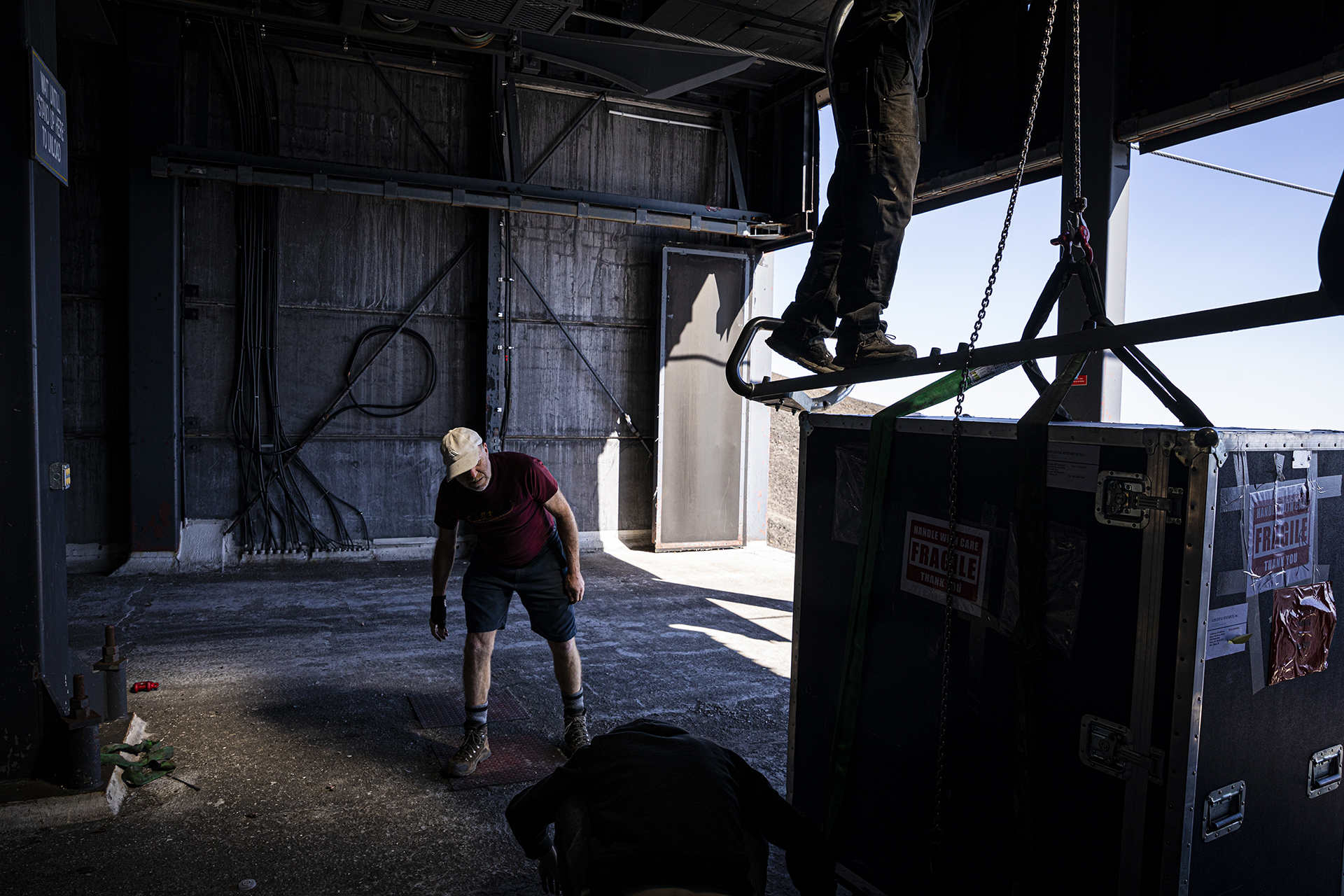 Inside the Mount Bachelor Observatory (which doubles as a ski lift hut in the winter), Jaffe studies pollution to produce “policy-relevant data” that can inform everything from local environmental-emissions policy to international treaties. Annual spikes in air pollution, be it coal pollution from China or fire smoke from northern California, may be outside local control — but they dramatically affect air-quality targets in places like Seattle and Portland. 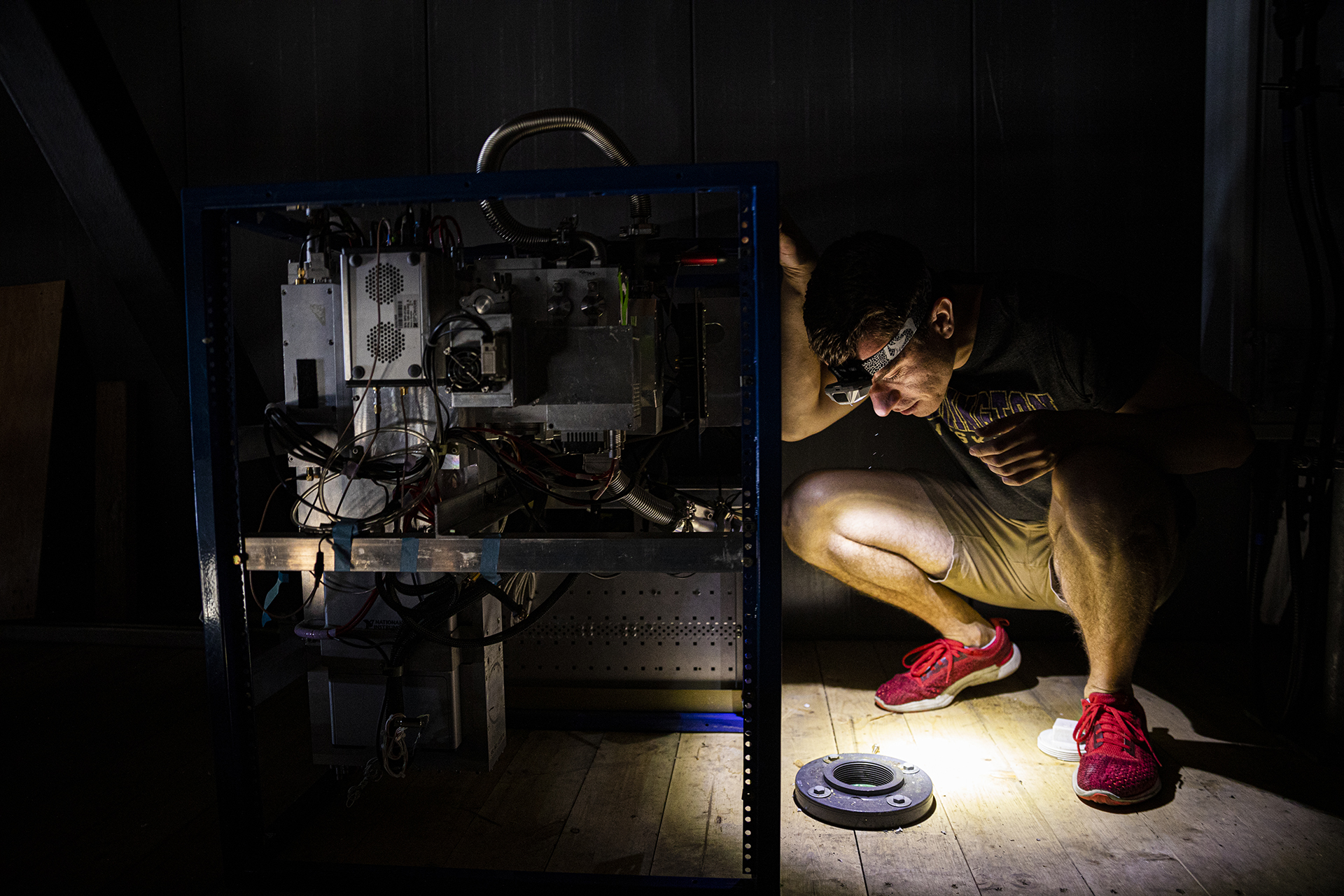 Phil Rund, a UW graduate student and research assistant in the lab of Department of Atmospheric Sciences Professor Joel Thornton, inspects a port through which air will be sampled. Jaffe worked with Thornton’s lab and researchers from other universities on a range of air-quality issues that are closely related, from increasing levels of wildfire smoke to how chemicals affect human health and the environment to how K–12 teachers educate students about climate change and air quality. 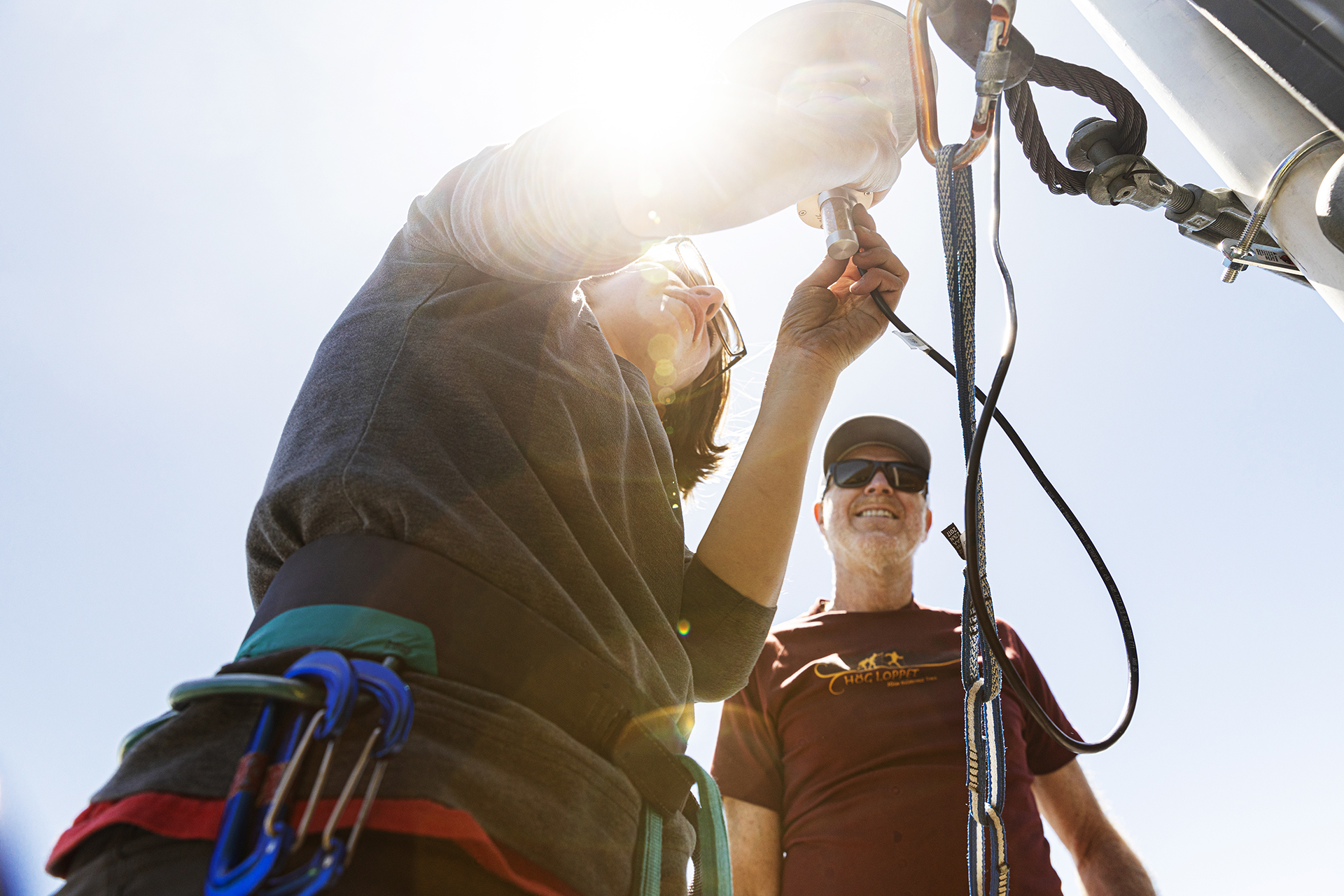 Claire Buysse, ’19, a graduate research assistant for the Jaffe Research Group, sets up radiometers to measure UV light, with Jaffe at right. Sunlight reacts with airborne nitrogen oxides (the byproduct of fossil fuels and forest fires) and volatile organic compounds in wildfire smoke — further degrading air quality and producing an excess of ozone, which is toxic. 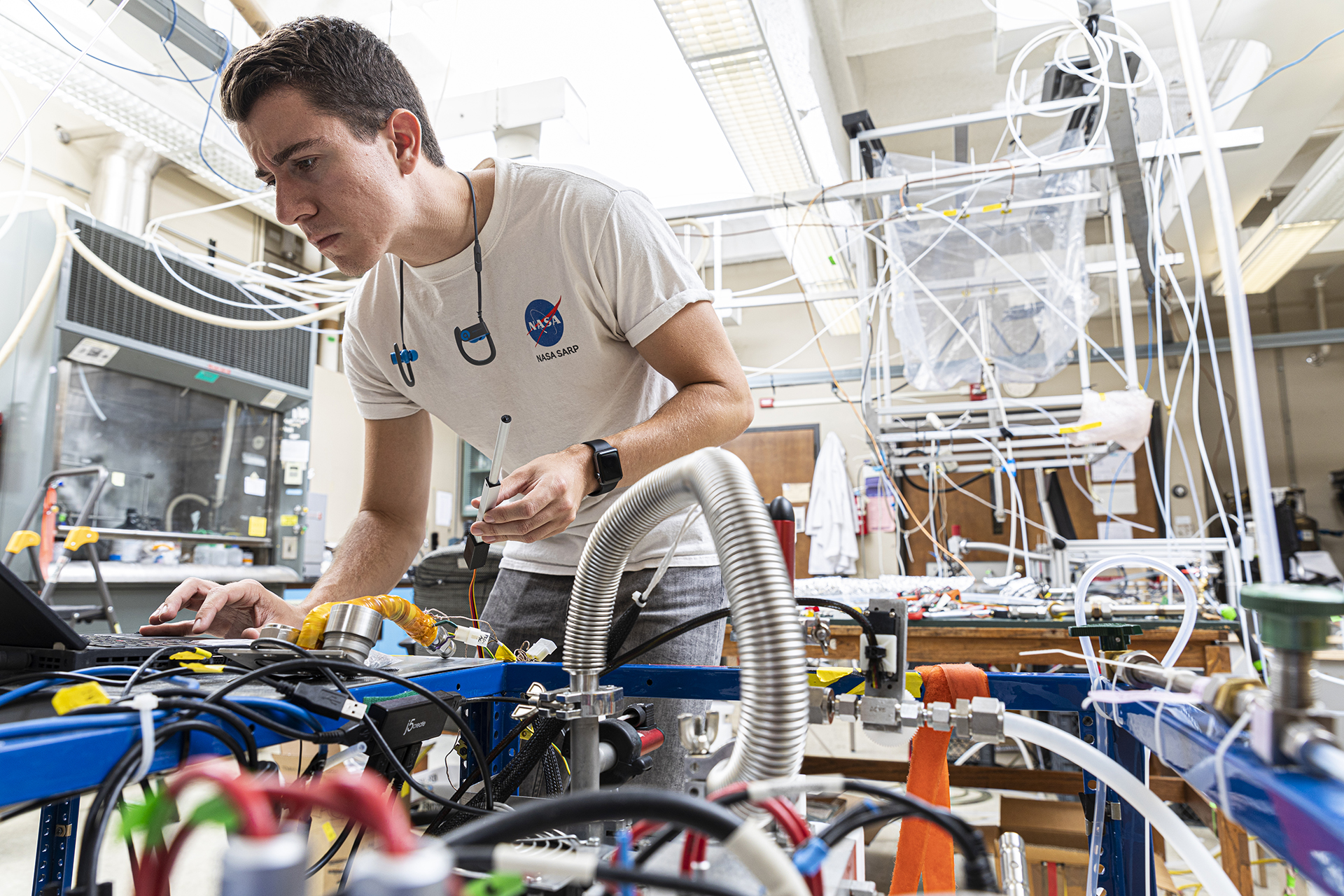 Back in Thornton’s Seattle lab, Rund calibrates an instrument that will be used to learn more about the chemistry and physics of pollutants like smoke, and not just on the summit of Mount Bachelor; similar equipment is loaded onto planes to measure the air throughout the West. 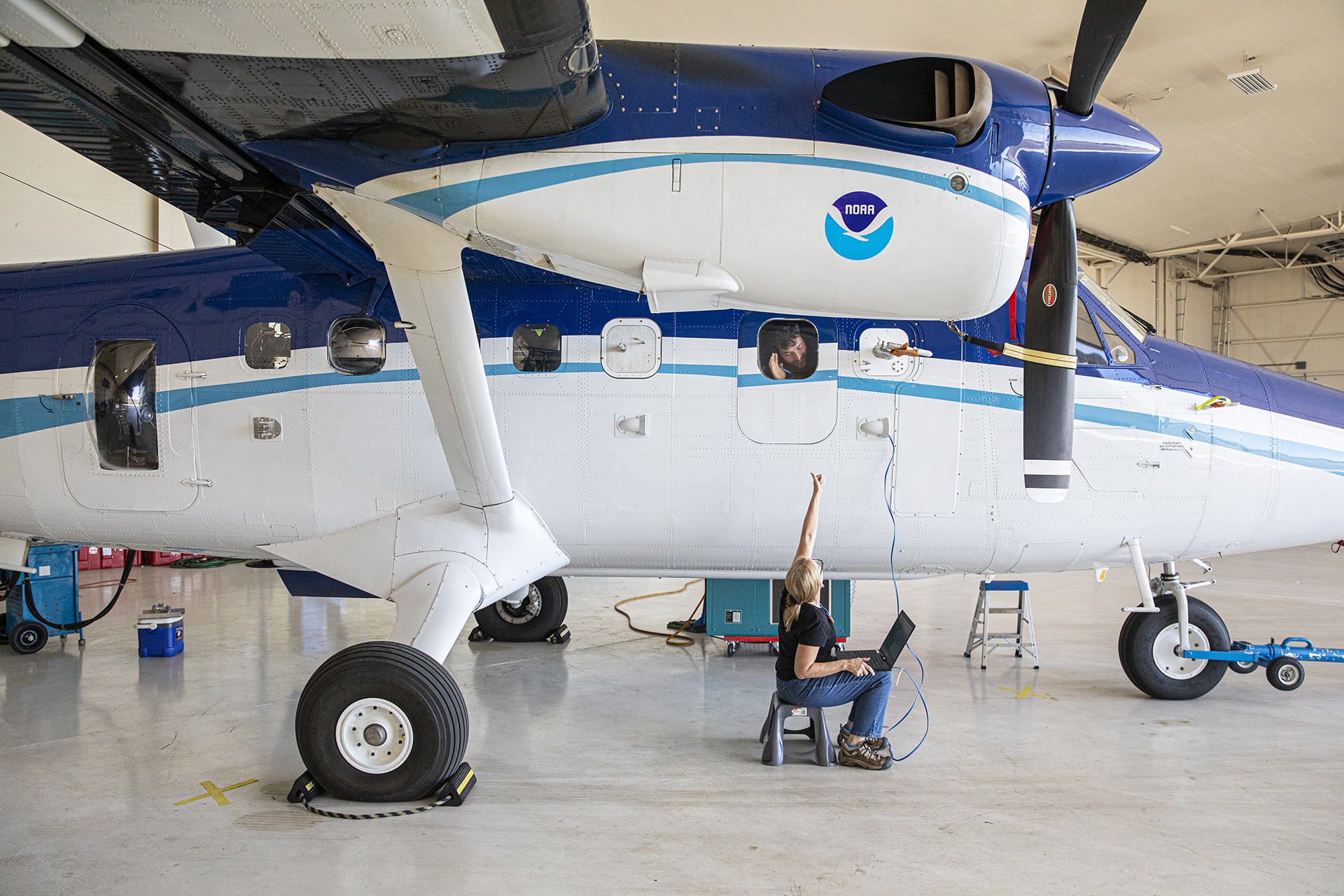 Wildfire smoke can drive chemical reactions and create byproducts like ozone that are toxic to humans. Through a partnership with NOAA, Thornton’s work takes researchers by plane all over the West to study wildfire smoke columns at the source. Shown here: NOAA researchers Anne Middlebrook (seated) and Alessandro Franchin (plane window). 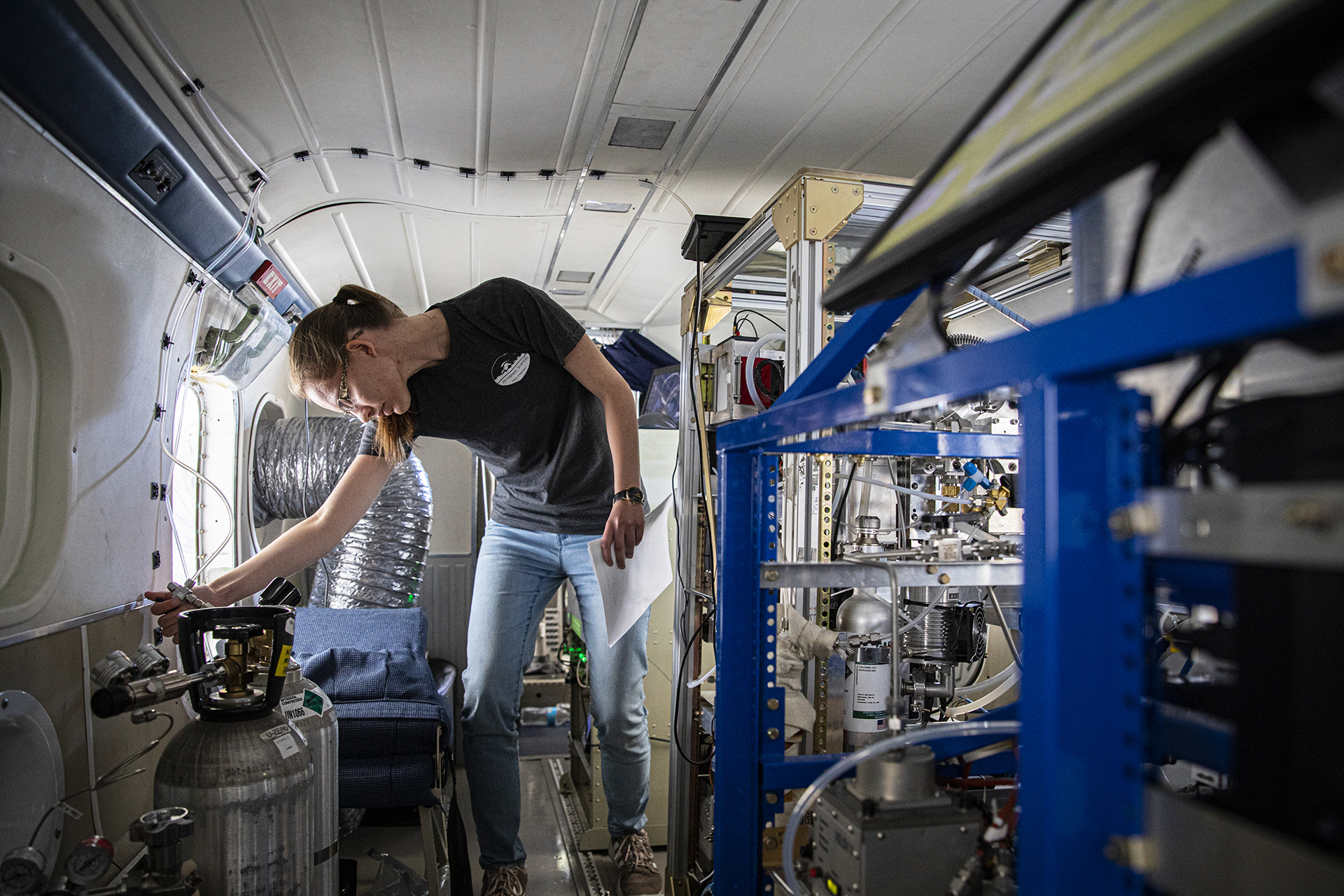 Carley Fredrickson, ’23, a research assistant in the Thornton Lab, checks research equipment before a flight. Developing a better understanding of the chemistry and physics of smoke’s travel, interaction and evolution will help us make more accurate predictions, says Thornton. Like Jaffe’s research, Thornton’s has impacts on public policy — balancing local pollution limits and regulation with a deeper understanding of the wildfire smoke in the air, whether from down the road or across the Pacific Ocean.

As our climate changes and wildfires continue to grow more frequent and severe, as predicted, smoke pollution will force people to alter their behavior — or face adverse health effects. Smoke particles, even those from far away, can be breathed deep into the lungs and cause respiratory and heart problems, as well as lowered birth weight and other effects.

“It’s not just the particles,” says Edmund Seto, associate professor in the UW Department of Environmental & Occupational Health Sciences who researches risk and exposure. “You’ve got a bunch of toxic gases as well, including carbon monoxide and nitrogen oxides. There are a lot of cancer-causing components in wildfire smoke.”

Severe smoke is a particular danger to anyone who can’t stay inside: those experiencing homelessness, migrant workers who harvest crops at the height of the fire season, firefighters and the many other essential workers whose jobs require them to be outdoors.

To address severe smoke conditions, says Seto, schools could consider installing better filtration and ventilation systems and keeping children indoors during recess. And emergency public clean air shelters, like the one opened in Seattle’s SoDo neighborhood during this year’s fire season, provide a refuge for those who need them most. A mandate for employers to provide masks for outdoor workers might help, says Seto, though it’s hard to enforce employees wearing them while doing hard physical labor in already hot weather.

While it’s important to address these day-to-day issues, they’re ultimately symptoms of larger problems. “It’s downstream from what we should be doing to mitigate climate change and droughts,” says Seto.

“There’s got to be a better way to manage our forests and natural vegetation. By the time you’re evacuating communities and dealing with the public health impacts, it’s already too late.”

When you support wildfire research at the UW, you can help UW experts lead the way in response to a new era of fires.